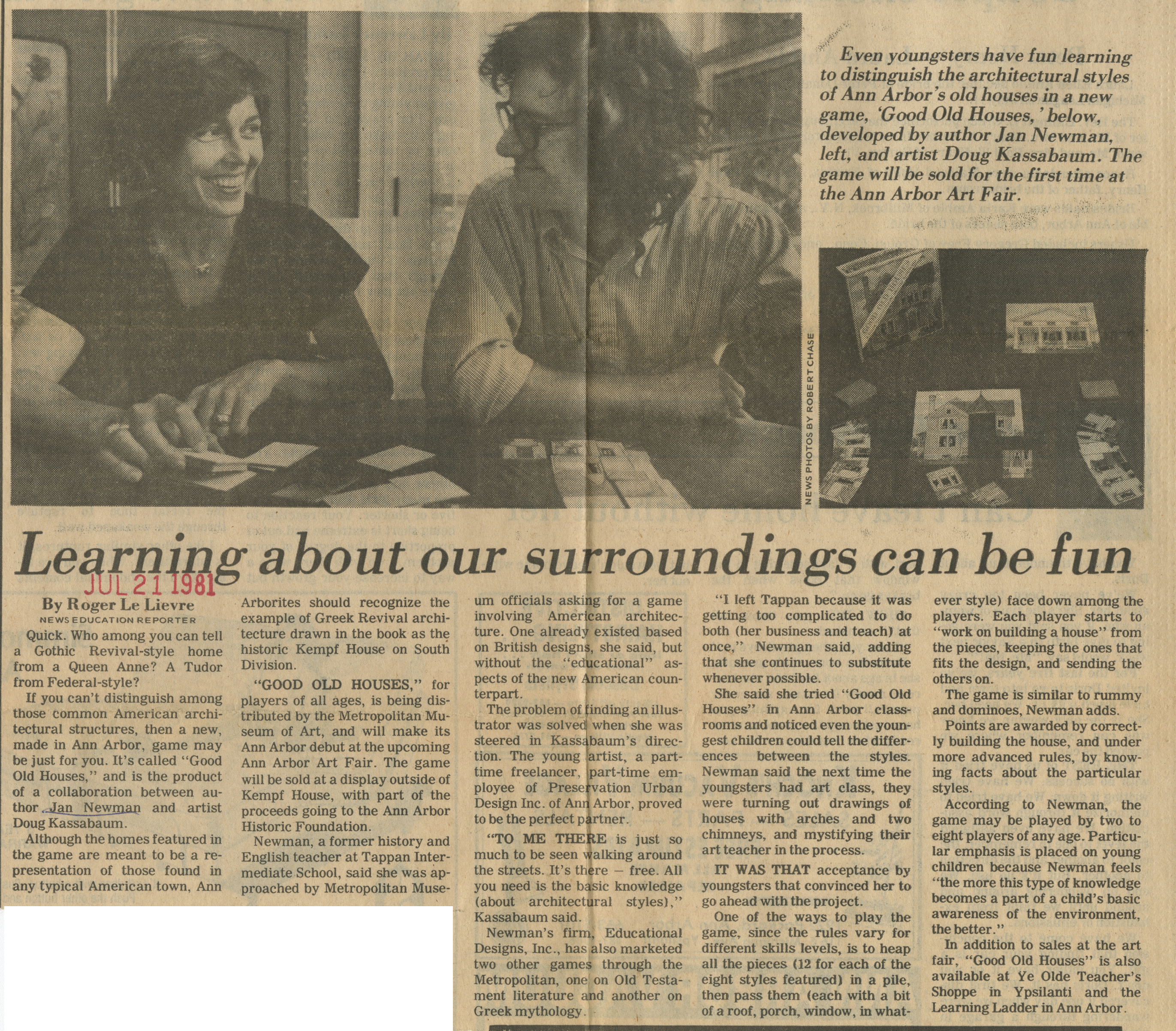 Quick. Who among you can tell a Gothic Revival-style home from a Queen Anne? A Tudor from Federal-style?

If you can't distinguish among those common American architectural structures, then a new, made in Ann Arbor, game may be just for you. It's called "Good Old Houses," and is the product of a collaboration between author Jan Newman and artist Doug Kassabaum.

Although the homes featured in the game are meant to be a representation of those found in any typical American town, Ann Arborites should recognize the example of Greek Revival architecture drawn in the book as the historic Kempf House on South Division.

"GOOD OLD HOUSES," for players of all ages, is being distributed by the Metropolitan Museum of Art, and will make its Ann Arbor debut at the upcoming Ann Arbor Art Fair. The game will be sold at a display outside of Kempf House, with part of the proceeds going to the Ann Arbor Historic Foundation.

Newman, a former history and English teacher at Tappan Intermediate School, said she was approached by Metropolitan Museum officials asking for a game involving American architecture. One already existed based on British designs, she said, but without the "educational" aspects of the new American counterpart.

The problem of finding an illustrator was solved when she was steered in Kassabaum's direction. The young artist, a part-time employee of Preservation Urban Design Inc. of Ann Arbor, proved to be the perfect partner.

"TO ME THERE is just so much to be seen walking around the streets. It's there -- free. All you need is the basic knowledge (about architectural styles)," Kassabaum said.

Newman's firm, Educational Designs, Inc., has also marketed two other games through the Metropolitan, one on Old Testament literature and another on Greek mythology.

"I left Tappan because it was getting too complicated to do both (her business and teach) at once," Newman said, adding that she continues to substitute whenever possible.

She said she tried "Good Old Houses" in Ann Arbor classrooms and noticed even the youngest children could tell the differences between the styles. Newman said the next time the youngsters had art class, they were turning out drawings of houses with arches and two chimneys, and mystifying their art teacher in the process.

IT WAS THAT acceptance by youngsters that convinced her to go ahead with the project.

One of the ways to play the game, since the rules vary for different skill levels, is to heap all the pieces (12 for each of the eight styles featured) in a pile, then pass them (each with a bit of a roof, porch, window, in whatever style) face down among the players. Each player starts to "work on building a house" from the pieces, keeping the ones that fit the design, and sending the other on.

The game is similar to rummy and dominoes, Newman adds.

Points are awarded by correctly building the house, and under more advanced rules, by knowing facts about the particular styles.

According to Newman, the game may be played by two to eight players of any6 age. Particular emphasis is placed on young children because Newman feels "the more this type of knowledge becomes a part of a child's basic awareness of the environment, the better."

In addition to sales at the art fair, "Good Old Houses" is also available at Ye Olde Teacher's Shoppe in Ypsilanti and the Learning Ladder in Ann Arbor.

﻿Even youngsters have fun learning to distinguish the architectural styles of Ann Arbor's old houses in a new game, 'Good Old Houses,' below, developed by author Jan Newman, left, and artist Doug Kassabaum. The game will be sold for the first time at the Ann Arbor Art Fair.
NEWS PHOTOS BY ROBERT CHASE