Iggy stretches rock to its limits 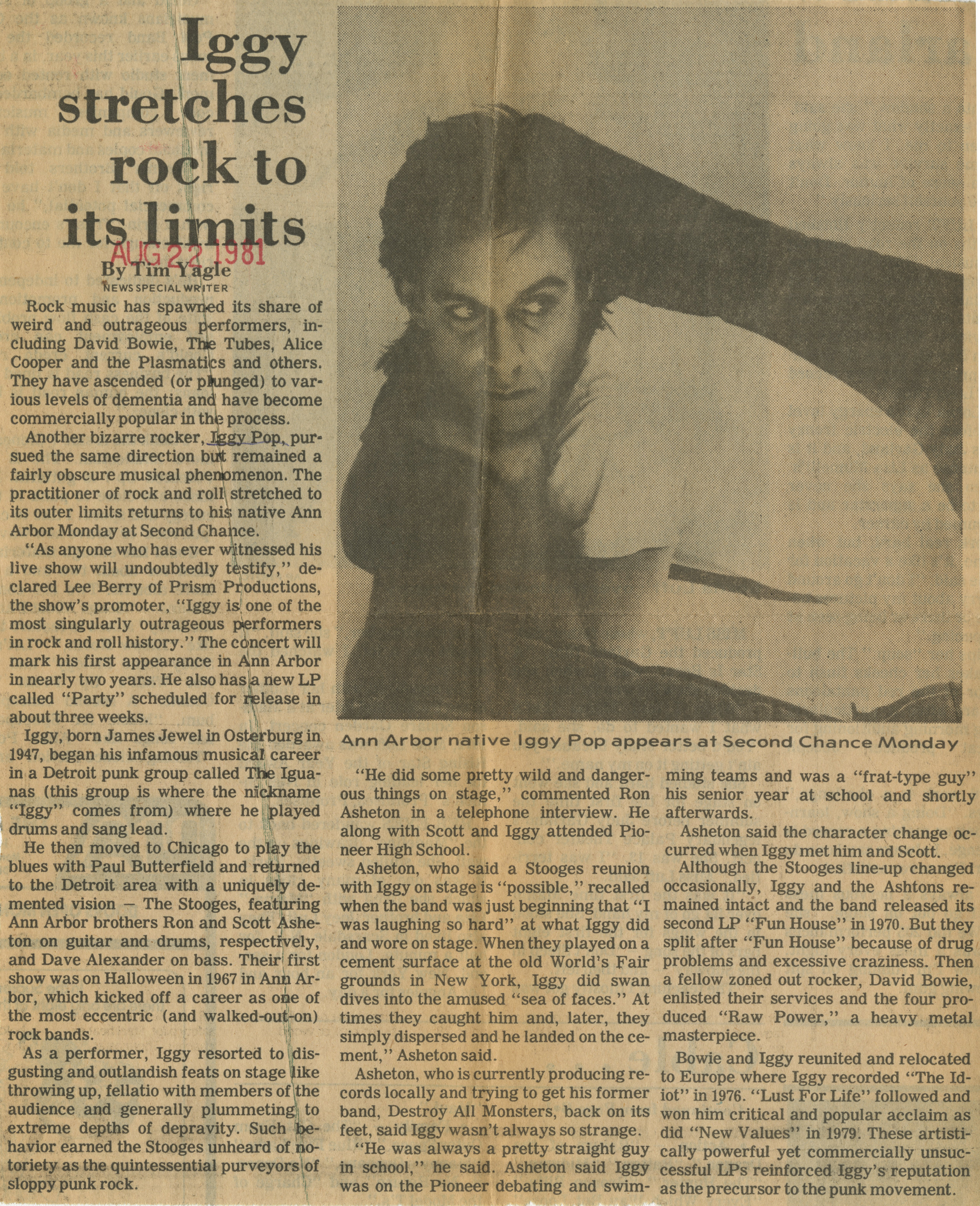 Iggy ﻿stretches rock to its limits

Rock music has spawned its share of weird and outrageous performers, including David Bowie, The Tubes, Alice Cooper and the Plasmatics and others. They have ascended (or plunged) to various levels of dementia and have become commercially popular in the process.

Another bizarre rocker, Iggy Pop, pursued the same direction but remained a fairly obscure musical phenomenon. The practitioner of rock and roll stretched to its outer limits returns to his native Ann Arbor Monday at Second Chance.

“As anyone who has ever witnessed his live show will undoubtedly testify,” declared Lee Berry of Prism Productions, the show’s promoter, “Iggy is. one of the most singularly outrageous performers in rock and roll history." The concert will mark his first appearance in Ann Arbor in nearly two years. He also hasp new LP called “Party” scheduled for release in about three weeks.

Iggy, born James Jewel in Osterburg in 1947, began his infamous musical career in a Detroit punk group called The Iguanas (this group is where the nickname “Iggy” comes from) where he played drums and sang lead.

He then moved to Chicago to play the blues with Paul Butterfield and returned to the Detroit area with a uniquely demented vision - The Stooges, featuring Ann Arbor brothers Ron and Scott Ashe-ton on guitar and drums, respectively, and Dave Alexander on bass. Their first show was on Halloween in 1967 in Ann Arbor, which kicked off a career as one of the most eccentric (and walked-out-on) rock bands.

“He did some pretty wild and dangerous things on stage," commented Ron Asheton in a telephone interview. He along with Scott and Iggy attended Pioneer High School.

Asheton, who said a Stooges reunion with Iggy on stage is “possible,” recalled when the band was just beginning that “I was laughing so hard” at what Iggy did and wore on stage. When they played on a cement surface at the old World’s Fair grounds in New York, Iggy did swan dives into the amused “sea of faces.” At times they caught him and, later, they simply dispersed and he landed on the cement,” Asheton said.

Asheton, who is currently producing records locally and trying to get his former band, Destroy All Monsters, back on its feet, said Iggy wasn’t always so strange.

“He was always a pretty straight guy in school,” he said. Asheton said Iggy was on the Pioneer debating and swimming teams and was a “frat-type guy” his senior year at school and shortly afterwards.

Asheton said the character change occurred when Iggy met him and Scott.

Although the Stooges line-up changed occasionally, Iggy and the Ashtons remained intact and the band released its second LP “Fun House” in 1970. But they split after “Fun House” because of drug problems and excessive craziness. Then a fellow zoned out rocker, David Bowie, enlisted their services and the four produced “Raw Power,” a heavy metal masterpiece.

Bowie and Iggy reunited and relocated to Europe where Iggy recorded “The Idiot” in 1976. “Lust For Life” followed and won him critical and popular acclaim as did “New Values” in 1979. These artistically powerful yet commercially unsuccessful LPs reinforced Iggy’s reputation as the precursor to the punk movement.