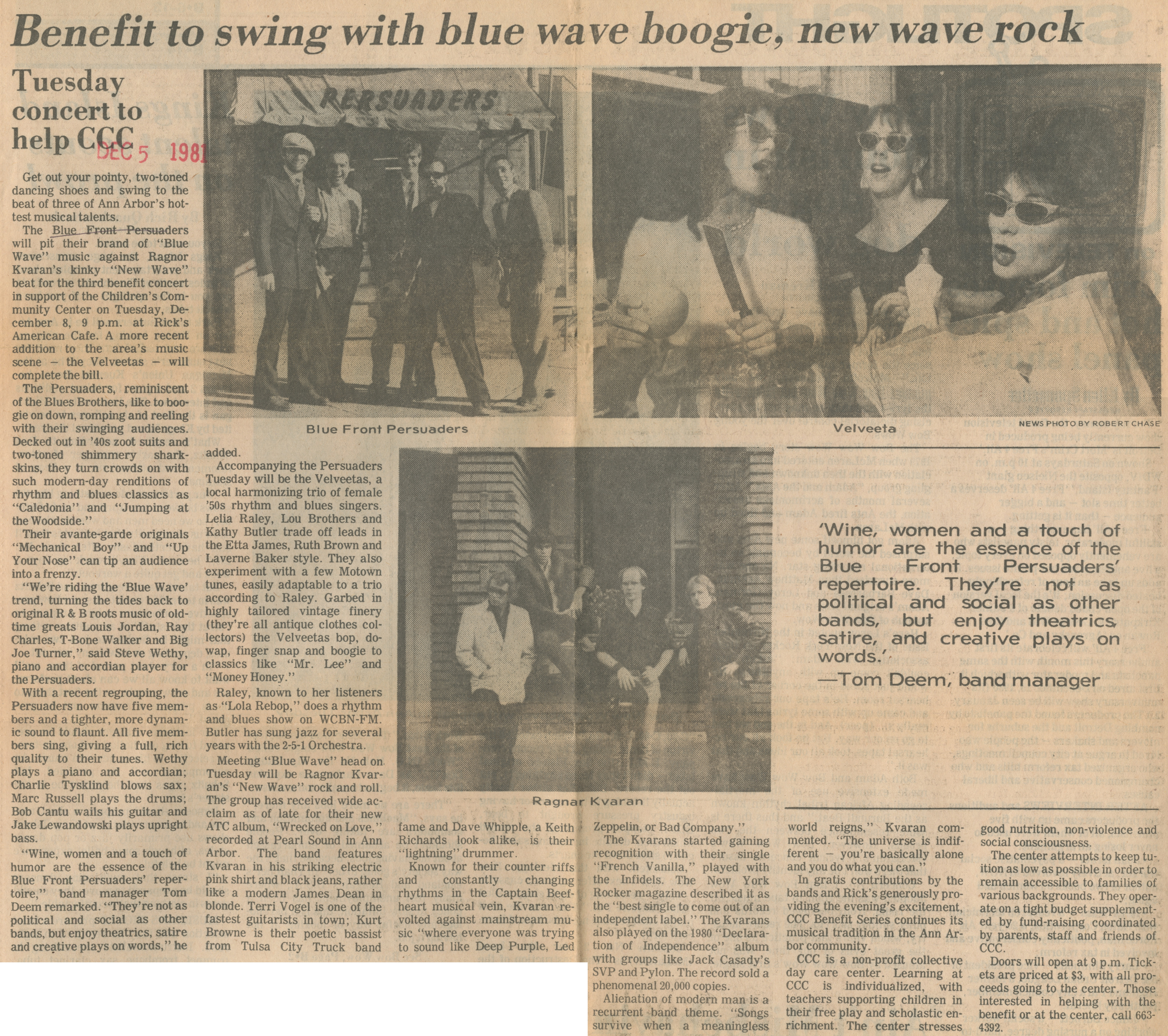 Get out your pointy, two-toned dancing shoes and swing to the beat of three of Ann Arbor’s hottest musical talents.

The Blue Front Persuaders will pit their brand of “Blue Wave” music against Ragnor Kvaran’s kinky “New Wave” beat for the third benefit concert in support of the Children’s Community Center on Tuesday, December 8, 9 p.m. at Rick’s American Cafe. A more recent addition to the area’s music scene - the Velveetas - will complete the bill.

The Persuaders, reminiscent of the Blues Brothers, like to boogie on down, romping and reeling with their swinging audiences. Decked out in ’40s zoot suits and two-toned shimmery shark-skins, they turn crowds on with such modern-day renditions of rhythm and blues classics as “Caledonia” and “Jumping at the Woodside.”

Their avante-garde originals “Mechanical Boy” and “Up Your Nose” can tip an audience into a frenzy.

“Wine, women and a touch of humor are the essence of the Blue Front Persuaders’ repertoire,” band manager Tom Deem remarked. “They’re not as political and social as other bands, but enjoy theatrics, satire and creative plays on words,” he added.

Accompanying the Persuaders Tuesday will be the Velveetas, a local harmonizing trio of female ’50s rhythm and blues singers. Lelia Raley, Lou Brothers and Kathy Butler trade off leads in the Etta James, Ruth Brown and Laverne Baker style. They also experiment with a few Motown tunes, easily adaptable to a trio according to Raley. Garbed in highly tailored vintage finery (they’re all antique clothes collectors) the Velveetas bop, do-wap, finger snap and boogie to classics like “Mr. Lee” and “Money Honey.”

Raley, known to her listeners as “Lola Rebop,” does a rhythm and blues show on WCBN-FM. Butler has sung jazz for several years with the 2-5-1 Orchestra.

Meeting “Blue Wave” head on. Tuesday will be Ragnor Kvaran’s “New Wave” rock and roll. The group has received wide acclaim as of late for their new ATC album, “Wrecked on Love,” recorded at Pearl Sound in Ann Arbor. The band features Kvaran in his striking electric pink shirt and black jeans, rather like a modern James Dean in blonde. Terri Vogel is one of the fastest guitarists in town; Kurt Browne is their poetic bassist from Tulsa City Truck band fame and Dave Whipple, a Keith Richards look alike, is their “lightning” drummer.

Known for their counter riffs and constantly changing rhythms in the Captain Beef-heart musical vein, Kvaran revolted against mainstream music “where everyone was trying to sound like Deep Purple, Led Zeppelin, or Bad Company.”

The Kvarans started gaining recognition with their single “French Vanilla,” played with the Infidels. The New York Rocker magazine described it as the “best single to come out of an independent label.” The Kvarans also played on the 1980 “Declaration of Independence” album with groups like Jack Casady’s SVP and Pylon. The record sold a phenomenal 20,000 copies.

Alienation of modern man is a recurrent band theme. “Songs survive when a meaningless world reigns,” Kvaran commented. “The universe is indifferent - you’re basically alone and you do what you can.”

In gratis contributions by the bands and Rick’s generously providing the evening’s excitement, CCC Benefit Series continues its musical tradition in the Ann Arbor community.

CCC is a non-profit collective day care center. Learning at CCC is individualized, with teachers supporting children in their free play and scholastic enrichment. The center stresses good nutrition, non-violence and social consciousness.

The center attempts to keep tuition as low as possible in order to. remain accessible to families of various backgrounds. They operate on a tight budget supplemented by fund-raising coordinated by parents, staff and friends of CCC.

Doors will open at 9 p.m. Tickets are priced at $3, with all proceeds going to the center. Those interested in helping with the benefit or at the center, call 663-4392.

'Wine, women and a touch of humor are the essence of the Blue Front Persuaders' repertoire.  They're not as political and social as other bands, but enjoy theatrics, satire and creative plays on words.' -Tom Deem, band manager