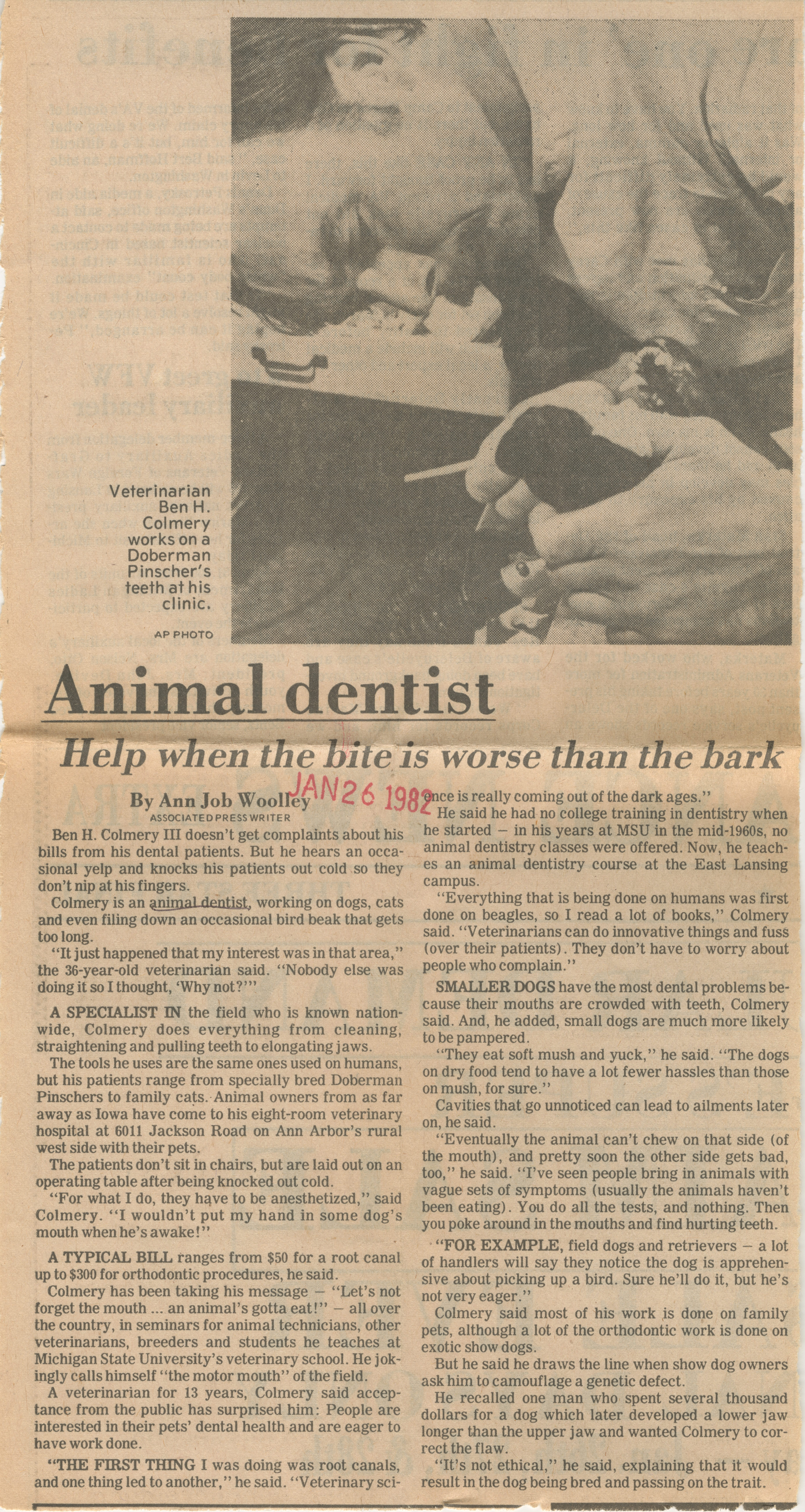 ﻿Veterinarian Ben H. Colmery works on a Doberman Pinscher's teeth at his clinic.

Help when the bite is worse than the bark

Ben H. Colmery III doesn’t get complaints about his bills from his dental patients. But he hears an occasional yelp and knocks his patients out cold so they don’t nip at his fingers.

Colmery is an animal dentist working on dogs, cats and even filing down an occasional bird beak that gets too long.

“It just happened that my interest was in that area,” the 36-year-old veterinarian said. “Nobody else was doing it so I thought, ‘Why not?”’

A SPECIALIST IN the field who is known nationwide, Colmery does everything from cleaning, straightening and pulling teeth to elongating jaws.

The tools he uses are the same ones used on humans, but his patients range from specially bred Doberman Pinschers to family cats. Animal owners from as far away as Iowa have come to his eight-room veterinary hospital at 6011 Jackson Road on Ann Arbor’s rural west side with their pets.

The patients don’t sit in chairs, but are laid out on an operating table after being knocked out cold.

“For what I do, they have to be anesthetized,” said Colmery. “I wouldn’t put my hand in some dog’s mouth when he’s awake! ”

A TYPICAL BILL ranges from $50 for a root canal up to $300 for orthodontic procedures, he said.

Colmery has been taking his message — “Let’s not forget the mouth ... an animal’s gotta eat!” - all over the country, in seminars for animal technicians, other veterinarians, breeders and students he teaches at Michigan State University’s veterinary school. He jokingly calls himself ‘ ‘the motor mouth” of the field.

A veterinarian for 13 years, Colmery said acceptance from the public has surprised him: People are interested in their pets’ dental health and are eager to have work done.

“THE FIRST THING I was doing was root canals, and one thing led to another,” he said. “Veterinary science is really coming out of the dark ages. ’ ’

“Everything that is being done on humans was first done on beagles, so I read a lot of books,” Colmery said. “Veterinarians can do innovative things and fuss (over their patients). They don’t have to worry about people who complain.”

SMALLER DOGS have the most dental problems because their mouths are crowded with teeth, Colmery said. And, he added, small dogs are much more likely to be pampered.

“They eat soft mush and yuck,” he said. “The dogs on dry food tend to have a lot fewer hassles than those on mush, for sure.”

Cavities that go unnoticed can lead to ailments later on, he said.

“Eventually the animal can’t chew on that side (of the mouth), and pretty soon the other side gets bad, too,” he said. “I’ve seen people bring in animals with vague sets of symptoms (usually the animals haven’t been eating). You do all the tests, and nothing. Then you poke around in the mouths and find hurting teeth.

“FOR EXAMPLE, field dogs and retrievers - a lot of handlers will say they notice the dog is apprehensive about picking up a bird. Sure he’ll do it, but he’s not very eager.”

But he said he draws the line when show dog owners ask him to camouflage a genetic defect.

He recalled one man who spent several thousand dollars for a dog which later developed a lower jaw longer than the upper jaw and wanted Colmery to correct the flaw.

“It’s not ethical,” he said, explaining that it would result in the dog being bred and passing on the trait.