Woman Wins Suit After Her Death 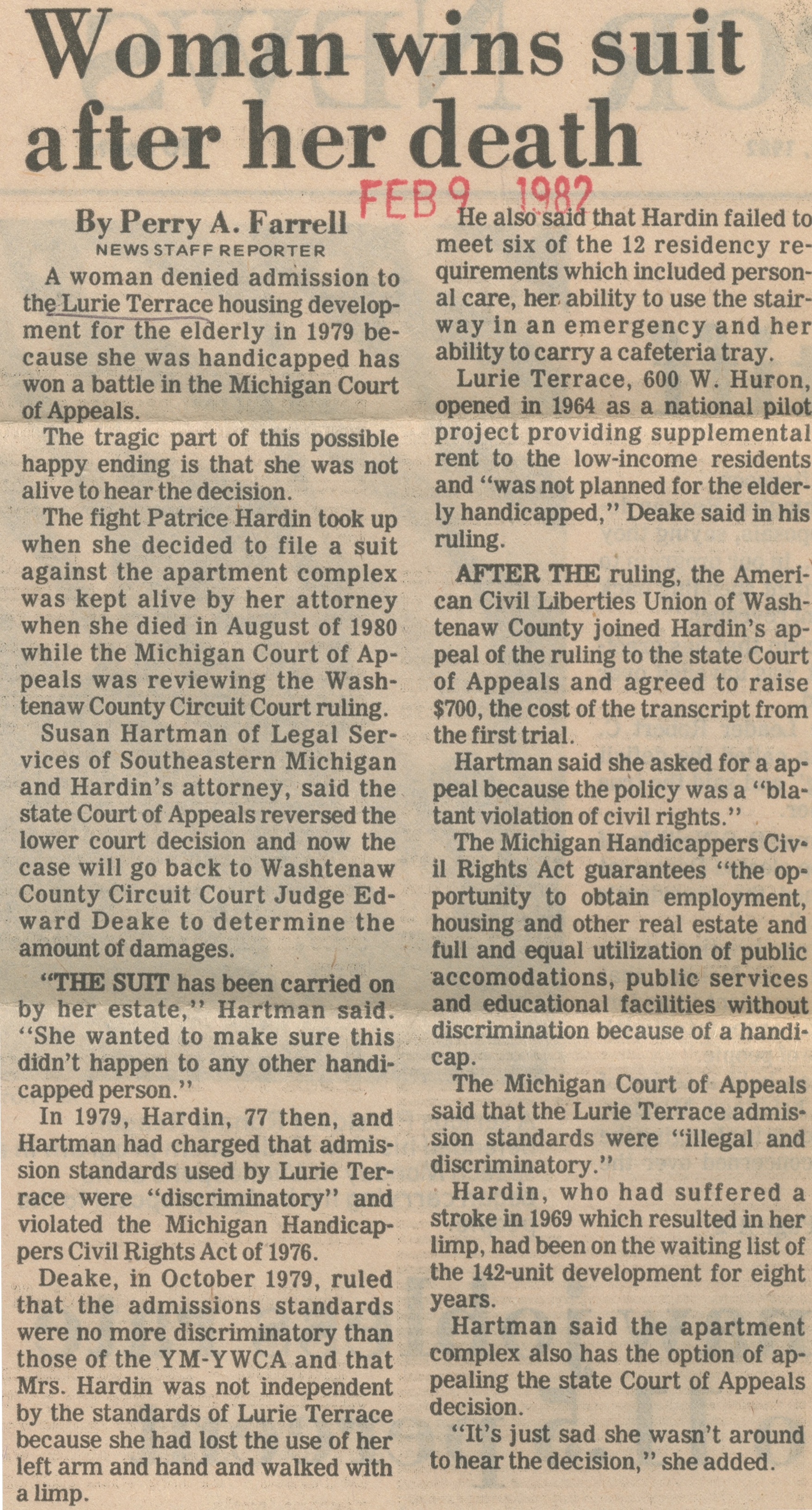 ﻿Woman wins suit after her death

By Perry A. Farrell

A woman denied admission to the Lurie Terrace housing development for the elderly in 1979 because she was handicapped has won a battle in the Michigan Court of Appeals.

The tragic part of this possible happy ending is that she was not alive to hear the decision.

The fight Patrice Hardin took up when she decided to file a suit against the apartment complex was kept alive by her attorney when she died in August of 1980 while the Michigan Court of Appeals was reviewing the Washtenaw County Circuit Court ruling.

Susan Hartman of Legal Services of Southeastern Michigan and Hardin’s attorney, said the state Court of Appeals reversed the lower court decision and now the case will go back to Washtenaw County Circuit Court Judge Edward Deake to determine the amount of damages.

“THE SUIT has been carried on by her estate,” Hartman said. “She wanted to make sure this didn’t happen to any other handicapped person.”

In 1979, Hardin, 77 then, and Hartman had charged that admission standards used by Lurie Terrace were “discriminatory” and violated the Michigan Handicappers Civil Rights Act of 1976.

Deake, in October 1979, ruled that the admissions standards were no more discriminatory than those of the YM-YWCA and that Mrs. Hardin was not independent by the standards of Lurie Terrace because she had lost the use of her left arm and hand and walked with a limp.

He also said that Hardin failed to meet six of the 12 residency requirements which included personal care, her ability to use the stairway in an emergency and her ability to carry a cafeteria tray.

Lurie Terrace, 600 W. Huron, opened in 1964 as a national pilot project providing supplemental rent to the low-income residents and “was not planned for the elderly handicapped,” Deake said in his ruling.

AFTER THE ruling, the American Civil Liberties Union of Washtenaw County joined Hardin’s appeal of the ruling to the state Court of Appeals and agreed to raise $700, the cost of the transcript from the first trial.

Hartman said she asked for a appeal because the policy was a “blatant violation of civil rights."

The Michigan Handicappers Civil Rights Act guarantees “the opportunity to obtain employment, housing and other real estate and full and equal utilization of public accomodations, public services and educational facilities without discrimination because of a handicap.

The Michigan Court of Appeals said that the Lurie Terrace admission standards were “illegal and discriminatory."

Hardin, who had suffered a stroke in 1969 which resulted in her limp, had been on the waiting list of the 142-unit development for eight years.

Hartman said the apartment complex also has the option of appealing the state Court of Appeals decision.

“It’s just sad she wasn’t around to hear the decision,” she added.