If You're Looking For A Puppy Or A Kitty To Love... 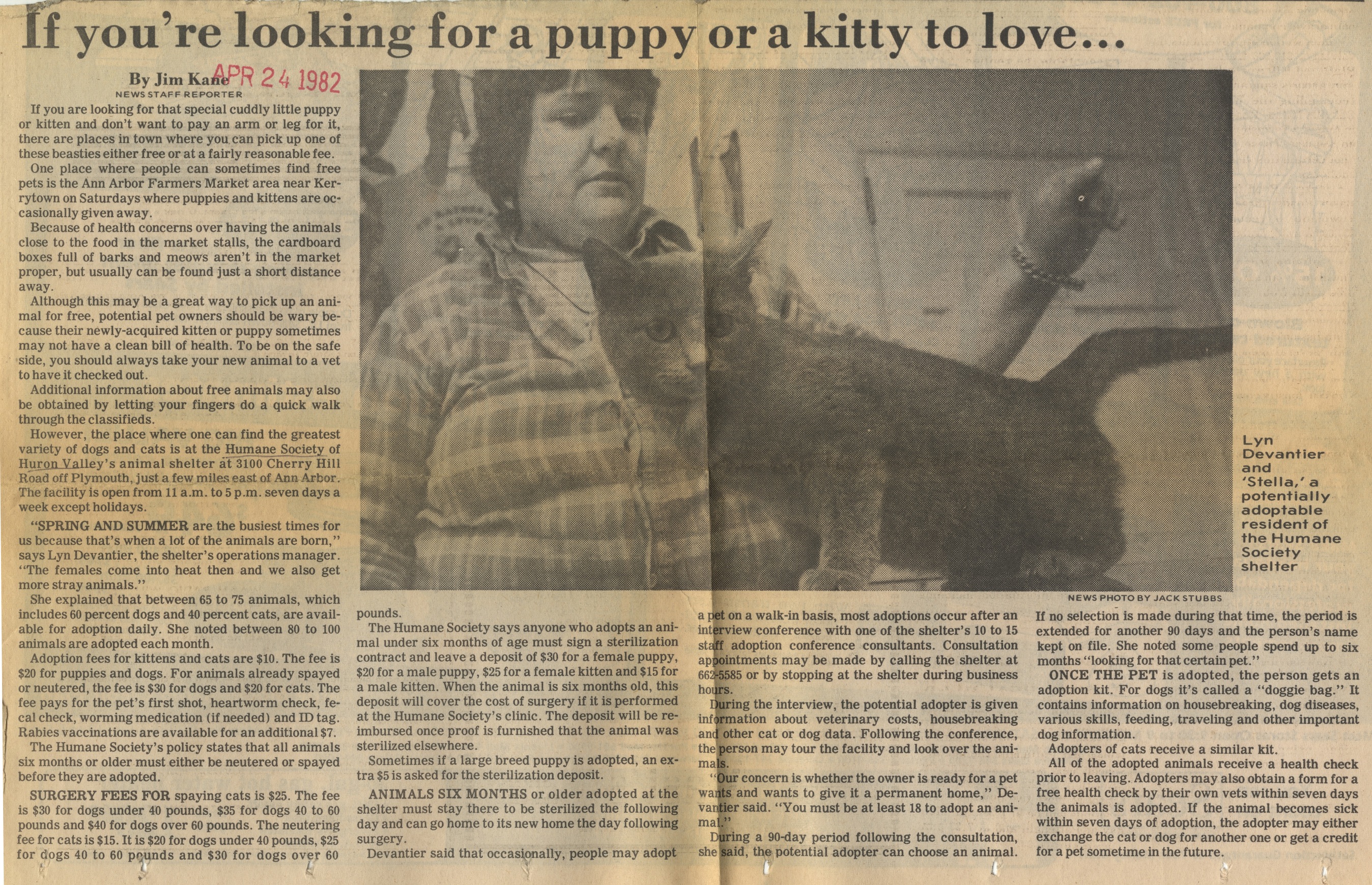 ﻿If you're looking for a puppy or a kitty to love...

If you are looking for that special cuddly little puppy or kitten and don't want to pay an arm or leg for it, there are places in town where you can pick up one of these beasties either free or at a fairly reasonable fee.

One place where people can sometimes find free pets is the Ann Arbor Farmers Market near Kerrytown on Saturdays where puppies and kittens are occasionally given away.

Because of health concerns over having the animals close to the food in the market stalls, the cardboard boxes full of barks and meows aren't in the market proper, but usually can be found just a short distance away.

Although this may be a great way to pick up an animal for free, potential pet owners should be wary because their newly-acquired kitten or puppy sometimes may not have a clean bill of health.  To be on the safe side, you should always take your new animal to a vet to have it checked out.

Additional information about free animals may also be obtained by letting your fingers do a quick walk through the classifieds.

However, the place where one can find the greatest variety of dogs and cats is at the Humane Society of Huron Valley's animal shelter at 3100 Cherry Hill Road off Plymouth, just a few miles east of Ann Arbor.  The facility is open from 11 a.m. to 5 p.m. seven days a week except holidays.

"SPRING AND SUMMER are the busiest times for us because that's when a lot of the animals are born," says Lyn Devantier, the shelter's operations manager.  "The females come into heat then and we also get more stray animals."

She explained that between 65 to 75 animals, which includes 60 percent dogs and 40 percent cats, are available for adoption daily.  She noted between 80 to 100 animals are adopted each month.

Adoption fees for kittens and cats are $10.  The fee is $20 for puppies and dogs.  For animals already spayed or neutered, the fee is $30 for dogs and $20 for cats.  The fee apys for the pet's first shot, heartworm check, fecal check, worming medication (if needed) and ID tag.  Rabies vaccinations are available for an additional $7.

The Humane Society's policy states that all animals six months or older must either be neutered or spayed before they are adopted.

The Humane Society says anyone who adopts an animal under six months of age must sign a sterilization contract and leave a deposit of $30 for a female puppy, $20 for a male puppy, $25 for a female kitten and $15 for a male kitten.  When the animal is six months old, this deposit will cover the cost of surgery if it is performed at the Humane Society's clinic.  The deposit will be reimbursed once proof is furnished that the animal was sterilized elsewhere.

Sometimes if a large breed puppy is adopted, an extra $5 is asked for the sterilization deposit.

ANIMALS SIX MONTHS or older adopted at the shelter must stay there to be sterilized the following day and can go home to its new home the day following surgery.

Devantier said that occasionally, people may adopt a pet on a walk-in basis, most adoptions occur after an interview conference with one of the shelter's 10 to 15 staff adoption conference consultants.  Consultation appointments may be made by calling the shelter at 662-5585 or by stopping at the shelter during business hours.

During the interview, the potential adopter is given information about veterinary costs, housebreaking and other cat or dog data.  Following the conference, the person may tour the facility and look over the animals.

"Our concern is whether the owner is ready for a pet wants and wants to give it a permanent home," Devantier said.  "You must be at least 18 to adopt an animal."

During a 90-day period following the consultation, she said, the potential adopter can choose an animal.

If no selection is made during that time, the period is extended for another 90 days and the person's name kept on file.  She noted some people spend up to six months "looking for that certain pet."

ONCE THE PET is adopted, the person gets an adoption kit.  For dogs it's called a "doggie bag."  It contains information on housebreaking, dog diseases, various skills, feeding, traveling and other important dog information.