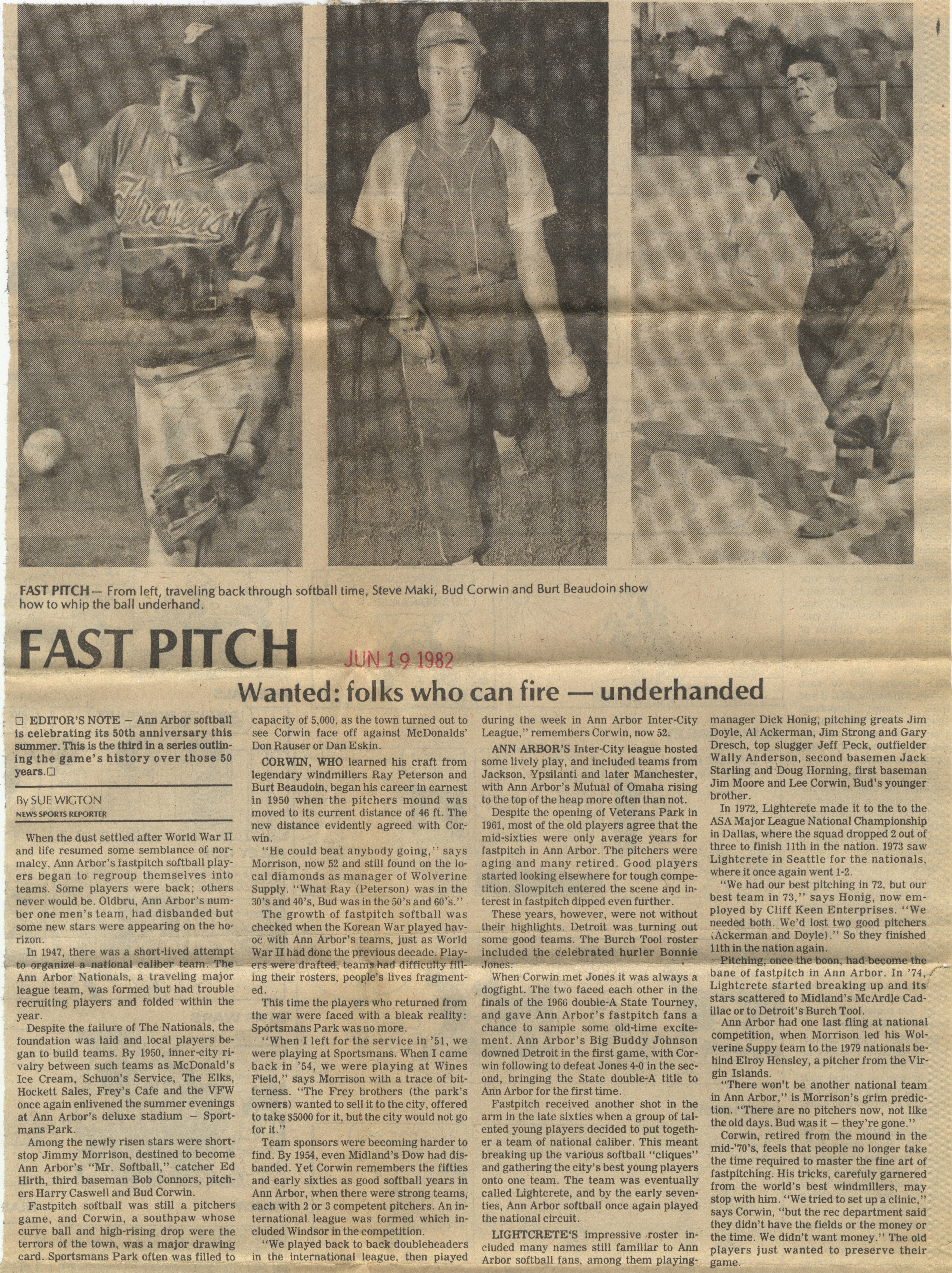 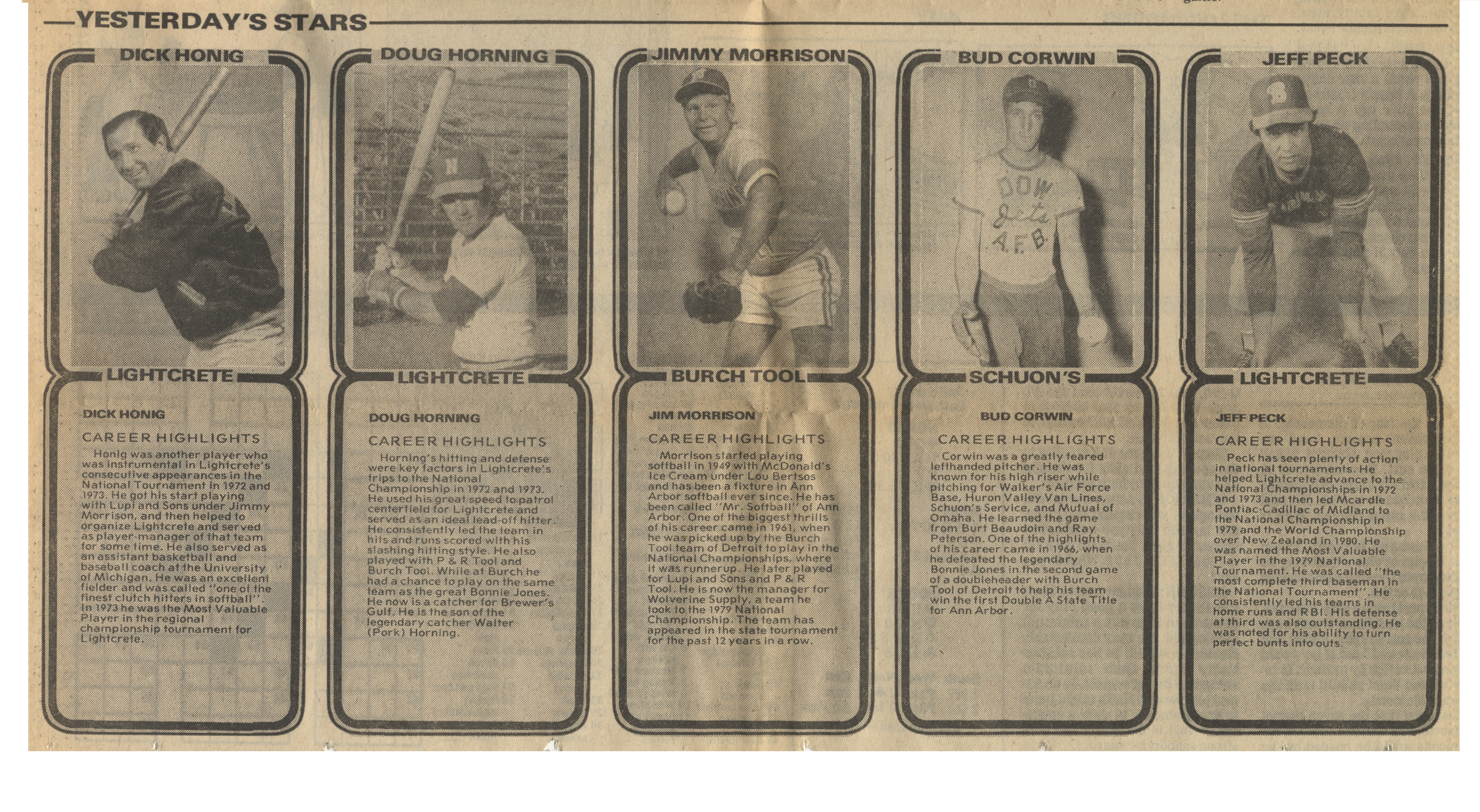 FAST PITCH— From ieft, traveling back through softball time, Steve Maki, Bud Corwin and Burt Beaudoin show
how to wh ip the bal I underhand.

EDITOR'S NOTE - Ann Arbor softball
is celebrating its 50th anniversary this
summer. This is the third in a series outlin-
ing the game's history over those 50
years.

When the dust settled after World War II
and life resumed some semblance of nor-
malcy, Ann Arbor's fastpitch softball play-
ers began to regroup themselves into
teams. Some players were back; others
never would be. Oldbru, Ann Arbor's num-
ber one men's tea1'" b^d disbanded but
some new stars w<. aring on the ho-
rizon.

In 1947, there was a short-lived attempt
to organize a ^ caliber -BHW^PThe
Ann Arbor N< , a traveling major
league team, was formed but had trouble
recruiting players and folded within the
year.

Despite the failure of The Nationals, the
foundation was laid and local players be-
gan to build teams. By 1950, inner-city ri-
valry between such teams as McDonald's
Ice Cream, Schuon's Service, The Elks,
Hockett Sales, Frey's Cafe and the VFW
once again enlivened the summer evenings
at Ann Arbor's deluxe stadium - Sport-
mans Park.

Fastpitch softball was still a pitchers
game, and Corwin, a southpaw whose
curve ball and high-rising drop were the
terrors of the town. was a major drawing
....... - -,. - ..... was filled to

capacity of 5,000, as the town turned out to
see Corwin face off against McDonalds'
Don Rauser or Dan Eskin.

CORWIN, WHO learned his craft from
legendary windmillers Ray Peterson and
Burt Beaudoin, began his career in earnest
in 1950 when the pitchers mound was
moved to its current dis ft. The
new distance evidently ^'.'.a with Cor-
win.

This time the players who returned from
the war were faced with a bleak reality:

Sp6rtsmans Park was no more.

Team sponsors were becoming harder to
find. By 1954, even Midland's Dow had dis-
banded. Yet Corwin remembers the fifties
and early sixties as good softball years in
Ann Arbor, when there were strong teams,
each with 2 or 3 competf tiers. An in-
ternational league was iv.iiicd which in-
cluded Windsor in the competition.

"We played back to back doubleheaders
in the international league, then played

ANN ARBOR'S Inter-City league hosted
some lively play, and included teams from
Jackson, Ypsilanti and later Manchester,
with Ann Arbor's Mutual of Omaha rising
to the top of the heap more often than not.

Despite the opening of Veterans Park in
1961, most of the old players agree that the
mid-sixties were only average years for
fastpitch in Ann Arbor. The pitchers were
aging and many retired. Good players
started looking elsewhere for tough compe-
tition. Slowpitch entered the scene and in-
terest in i h dipped even further.

These y^mu, however, were not without
their highlights. Detroit was turning out
some good teams. The Burch Tool roster
included the celebrated hurler Bonnie

Corwin met Jones it was always a

-;Iight. The two faced each other in the
finals of the 1966 double-A State Tourney,
and gave Ann Arbor's fastpitch fans a
chance to sample some old-time excite-
ment. Ann Arbor's Big Buddy Johnson
dowr •'"• .tgame,^" "

Fastpitch received another shot in the
arm in the late si '^en a group of tal-
ented young play< i ided to put togeth-
er a team of national caliber. This meant
breaking up the various softball "cliques"
and gathering the city's best young players
onto one team. The team was eventually
called Lightcrete, and by the early seven-
ties, Ann Arbor softball once again played
the national circuit

In 1972, Lightcrete made it to the to the
ASA Major League National Championship
in Dallas, where the squad dropped 2 out of
three to finish llth in the nation. 1973 saw
Lightcrete in Seattle for the nationals,
where it once again went 1-2.

"We had our best pitching in 72, but our
best team in 73," says Honig, now em-
ployed by Cliff Keen Enterprises. "We
needed both. We'd lost two good pitchers
^Ackerman and Doyle)." So they finished
11th in the nation again.

'Pitching, once the boon, had be^ome-the
bane of fastpitch in Ann Arbor. In '74, -
Lightcrete started breaking up and its
stars scattered to Midland's McArdle Cad-
illac or to Detroit's Burch Tool.

Ann Arbor had one last fling at national
competition, when Morrison led his Wol-
verine Suppy team to the 1979 nationals be-
hind Eiroy Hensley, a pitcher from the Vir-
gin Islands.

"There won't be another national team
in Ann Arbor," is Morrison's grim predic-
tion. "There are no pitchers now, not like
the old days. Bud was it — they're gone."

Corwin, retired from the mound in the
mid-'70's. feels that people no longer take
the time required to master the fine art of
fastpitching. His tricks, carefuly garnered
from the world's best windmillers, may
stop with him. "We tried to set up a clinic,"
says Corwin, "but the rec department said
they didn't have the fields or the money or
the time. We didn't want money." The old
players just wanted to preserve their
game.