So What Do You Say To A Pregnant Lady? 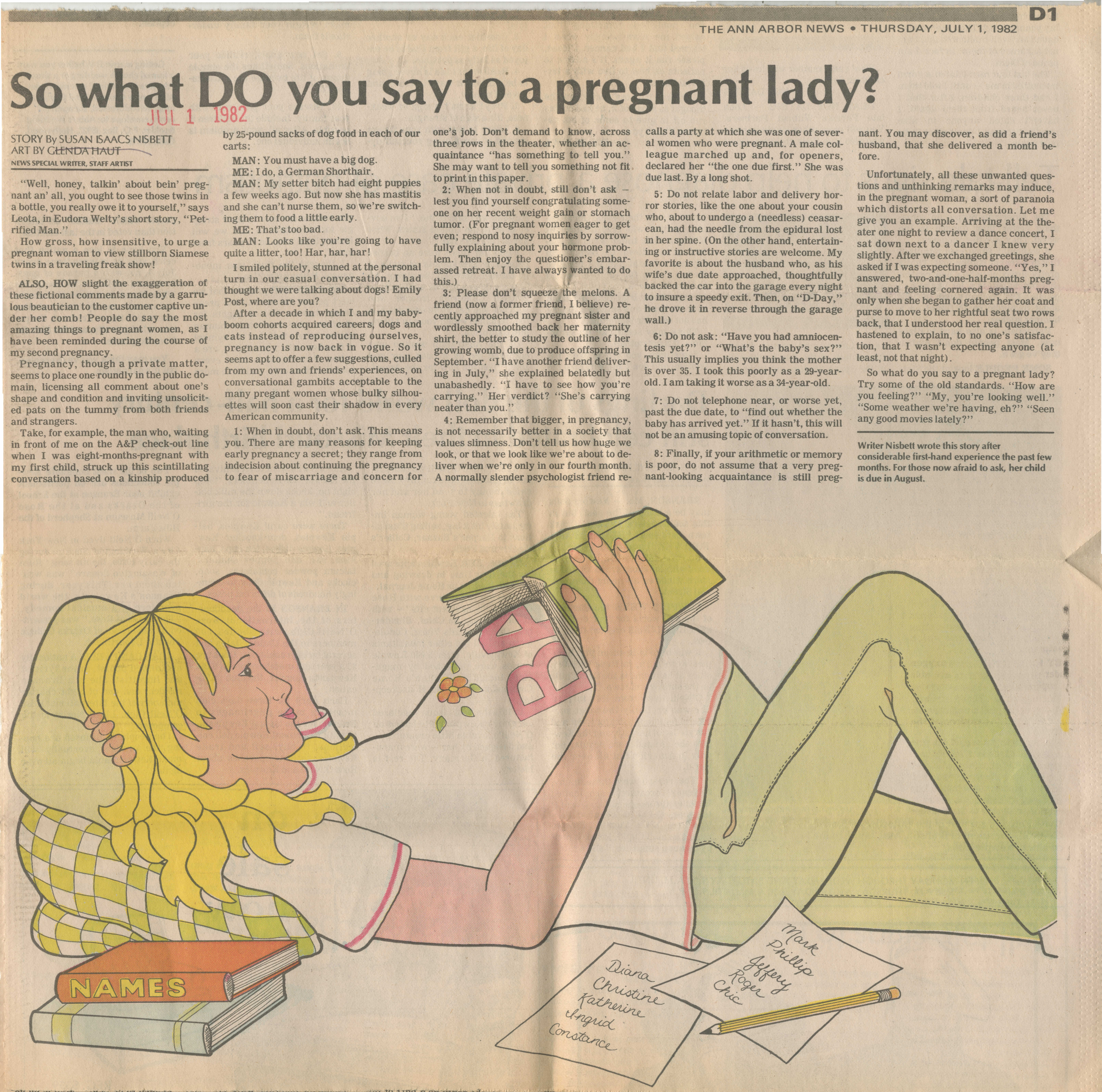 So what DO you say to a pregnant lady?

“Well, honey, talkin’ about bein’ pregnant an’ all, you ought to see those twins in a bottle, you really owe it to yourself,” says Leota, in Eudora Welty’s short story, “Petrified Man.”

How gross, how insensitive, to urge a pregnant woman to view stillborn Siamese twins in a traveling freak show!

ALSO, HOW slight the exaggeration of these fictional comments made by a garrulous beautician to the customer captive under her comb! People do say the most amazing things to pregnant women, as I have been reminded during the course of my second pregnancy.

Pregnancy, though a private matter, seems to place one roundly in the public domain, licensing all comment about one’s shape and condition and inviting unsolicited pats on the tummy from both friends and strangers.

Take, for example, the man who, waiting in front of me on the A&P check-out line when I was eight-months-pregnant with my first child, struck up this scintillating conversation based on a kinship produced by 25-pounds of dog food in each of our carts:

MAN: You must have a big dog.

ME: I do, a German Shorthair.

MAN: My setter bitch had eight puppies a few weeks ago. But now she has mastitis and she can’t nurse them, so we’re switching them to food a little early.

MAN: Looks like you’re going to have quite a litter, too! Har, har, har!

I smiled politely, stunned at the personal turn in our casual conversation. I had thought we were talking about dogs! Emily Post, where are you?

After a decade in which I and my baby-boom cohorts acquired careers, dogs and cats instead of reproducing ourselves, pregnancy is now back in vogue. So it seems apt to offer a few suggestions, culled from my own and friends’ experiences, on conversational gambits acceptable to the many pregnant women whose bulky silhouettes will soon cast their shadow in every American community.

1: When in doubt, don’t ask. This means you. There are many reasons for keeping early pregnancy a secret; they range from indecision about continuing the pregnancy to fear of miscarriage and concern for one’s job. Don’t demand to know, across three rows in the theater, whether an acquaintance “has something to tell you.” She may want to tell you something not fit to print in this paper.

2: When not in doubt, still don’t ask -lest you find yourself congratulating someone on her recent weight gain or stomach tumor. (For pregnant women eager to get even; respond to nosy inquiries by sorrowfully explaining about your hormone problem. Then enjoy the questioner’s embarassed retreat. I have always wanted to do this.)

3: Please don’t squeeze the melons. A friend (now a former friend, I believe) recently approached my pregnant sister and wordlessly smoothed back her maternity shirt, the better to study the outline of her growing womb, due to produce offspring in September. “I have another friend delivering in July,” she explained belatedly but unabashedly. “I have to see how you’re carrying.” Her verdict? “She’s carrying neater than you.”

4: Remember that bigger, in pregnancy, is not necessarily better in a society that values slimness. Don’t tell us how huge we look, or that we look like we’re about to deliver when we’re only in our fourth month. A normally slender psychologist friend recalls a party at which she was one of several women who were pregnant. A male colleague marched up and, for openers, declared her “the one due first.” She was due last. By a long shot.

5: Do not relate labor and delivery horror stories, like the one about your cousin who, about to undergo a (needless) ceasarean, had the needle from the epidural lost in her spine. (On the other hand, entertaining or instructive stories are welcome. My favorite is about the husband who, as his wife’s due date approached, thoughtfully backed the car into the garage every night to insure a speedy exit. Then, on “D-Day,” he drove it in reverse through the garage wall.)

7: Do not telephone near, or worse yet, past the due date, to “find out whether the baby has arrived yet.” If it hasn’t, this will not be an amusing topic of conversation.

8: Finally, if your arithmetic or memory is poor, do not assume that a very pregnant-looking acquaintance is still pregnant. You may discover, as did a friend’s husband, that she delivered a month before.

Unfortunately, all these unwanted questions and unthinking remarks may induce, in the pregnant woman, a sort of paranoia which distorts all conversation. Let me give you an example. Arriving at the theater one night to review a dance concert, I sat down next to a dancer I knew very slightly. After we exchanged greetings, she asked if I was expecting someone. “Yes,” I answered, two-and-one-half-months pregnant and feeling cornered again. It was only when she began to gather her coat and purse to move to her rightful seat two rows back, that I understood her real question. I hastened to explain, to no one’s satisfaction, that I wasn’t expecting anyone (at least, not that night).

So what do you say to a pregnant lady? Try some of the old standards. “How are you feeling?” “My, you’re looking well.” “Some weather we’re having, eh?” “Seen any good movies lately?”

Writer Nisbett wrote this story after considerable first-hand experience the past few months. For those now afraid to ask, her child is due in August.