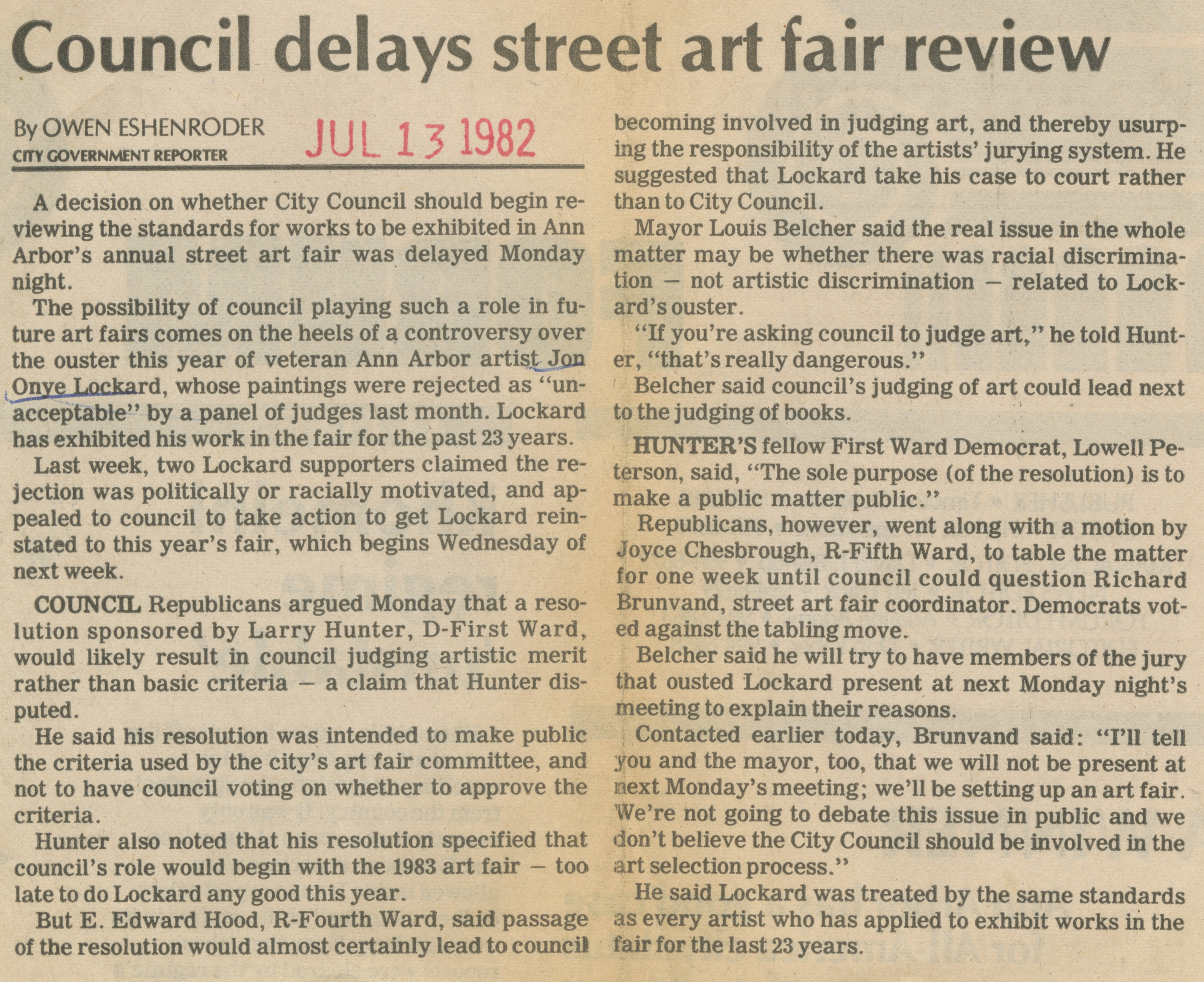 A decision on whether City Council should begin reviewing the standards for works to be exhibited in Ann Arbor’s annual street art fair was delayed Monday night.

The possibility of council playing such a role in future art fairs comes on the heels of a controversy over the ouster this year of veteran Ann Arbor artist Jon Onye Lockard whose paintings were rejected as “unacceptable” by a panel of judges last month. Lockard has exhibited his work in the fair for the past 23 years.

Last week, two Lockard supporters claimed the rejection was politically or racially motivated, and appealed to council to take action to get Lockard reinstated to this year’s fair, which begins Wednesday of next week.

COUNCIL Republicans argued Monday that a resolution sponsored by Larry Hunter, D-First Ward, would likely result in council judging artistic merit rather than basic criteria – a claim that Hunter disputed.

He said his resolution was intended to make public the criteria used by the city’s art fair committee, and not to have council voting on whether to approve the criteria.

Hunter also noted that his resolution specified that council’s role would begin with the 1983 art fair – too late to do Lockard any good this year.

But E. Edward Hood, R-Fourth Ward, said passage of the resolution would almost certainly lead to council becoming involved in judging art, and thereby usurping the responsibility of the artists’ jurying system. He suggested that Lockard take his case to court rather than to City Council.

Belcher said council’s judging of art could lead next to the judging of books. HUNTER’S fellow First Ward Democrat, Lowell Peterson, said, “The sole purpose (of the resolution) is to make a public matter public.”

Republicans, however, went along with a motion by Joyce Chesbrough, R-Fifth Ward, to table the matter for one week until council could question Richard Brunvand, street art fair coordinator. Democrats voted against the tabling move.

Belcher said he will try to have members of the jury that ousted Lockard present at next Monday night’s meeting to explain their reasons.

Contacted earlier today, Brunvand said: “I’ll tell you and the mayor, too, that we will not be present at next Monday’s meeting; we’ll be setting up an art fair. We’re not going to debate this issue in public and we don’t believe the City Council should be involved in the art selection process.”

He said Lockard was treated by the same standards as every artist who has applied to exhibit works in the fair for the last 23 years.