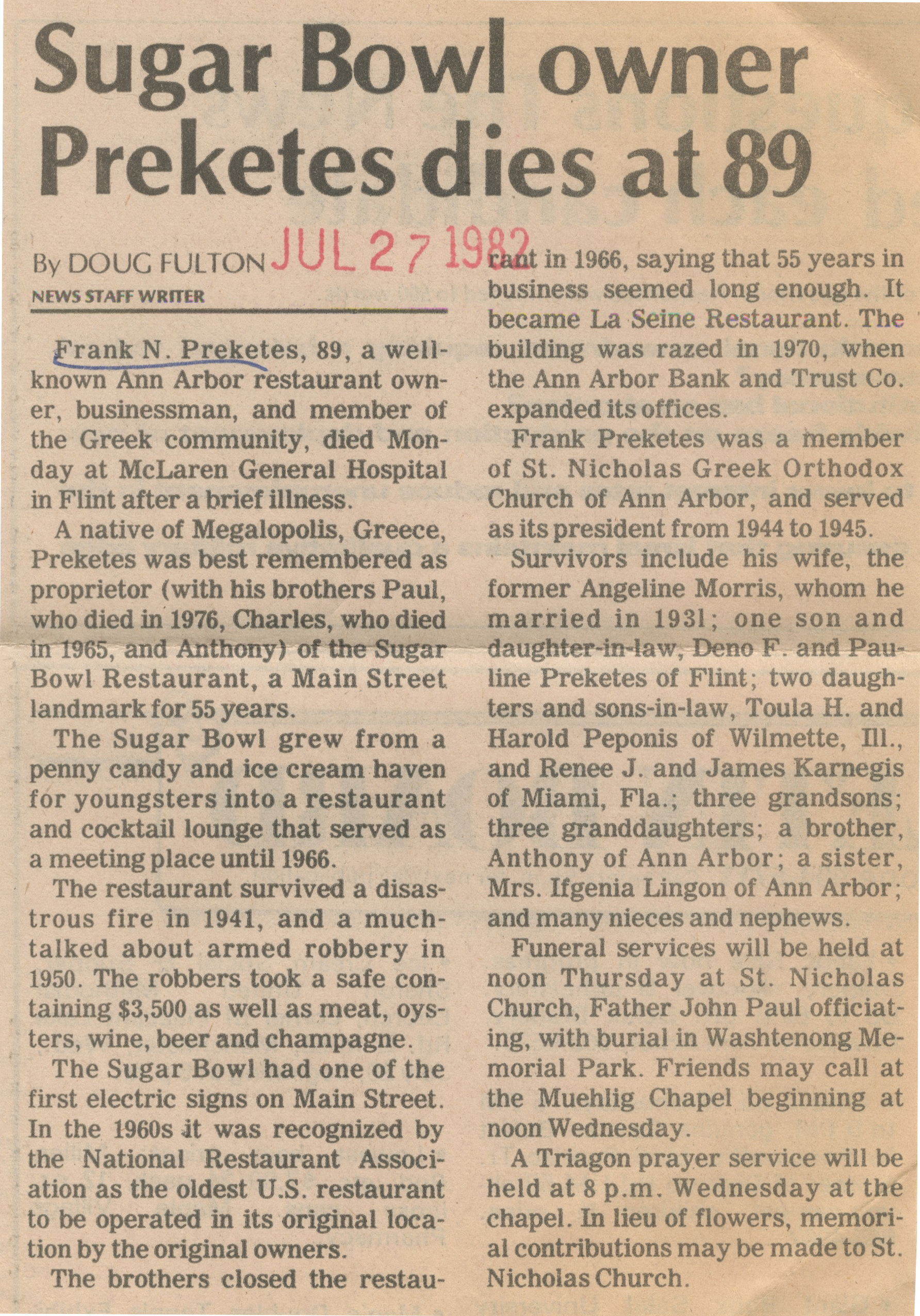 A native of Megalopolis, Greece, Preketes was best remembered as proprietor (with his brothers Paul, who died in 1976, Charles, who died in 1965, and Anthony) of the Sugar Bowl Restaurant, a Main Street landmark for 55 years.

The Sugar Bowl grew from a penny candy and ice cream haven for youngsters into a restaurant and cocktail lounge that served as a meeting place until 1966.

The restaurant survived a disastrous fire in 1941, and a much-talked about armed robbery in 1950. The robbers took a safe containing $3,500 as well as meat, oysters, wine, beer and champagne.

The Sugar Bowl had one of the first electric signs on Main Street. In the 1960s it was recognized by the National Restaurant Association as the oldest U.S. restaurant to be operated in its original location by the original owners.

The brothers closed the restaurant in 1966, saying that 55 years in business seemed long enough. It became La Seine Restaurant. The building was razed in 1970, when the Ann Arbor Bank and Trust Co. expanded its offices.

Frank Preketes was a member of St. Nicholas Greek Orthodox Church of Ann Arbor, and served as its president from 1944 to 1945.

Survivors include his wife, the former Angeline Morris, whom he married in 1931; one son and daughter-in-law, Deno F. and Pauline Preketes of Flint; two daughters and sons-in-law, Toula H. and Harold Peponis of Wilmette, 111., and Renee J. and James Kamegis of Miami, Fla.; three grandsons; three granddaughters; a brother, Anthony of Ann Arbor; a sister, Mrs. Ifgenia Lingon of Ann Arbor; and many nieces and nephews.

Funeral services will be held at noon Thursday at St. Nicholas Church, Father John Paul officiating, with burial in Washtenong Memorial Park. Friends may call at the Muehlig Chapel beginning at noon Wednesday.

A Triagon prayer service will be held at 8 p.m. Wednesday at the chapel. In lieu of flowers, memorial contributions may be made to St. Nicholas Church.