Killer Escapes Into North Side Of City 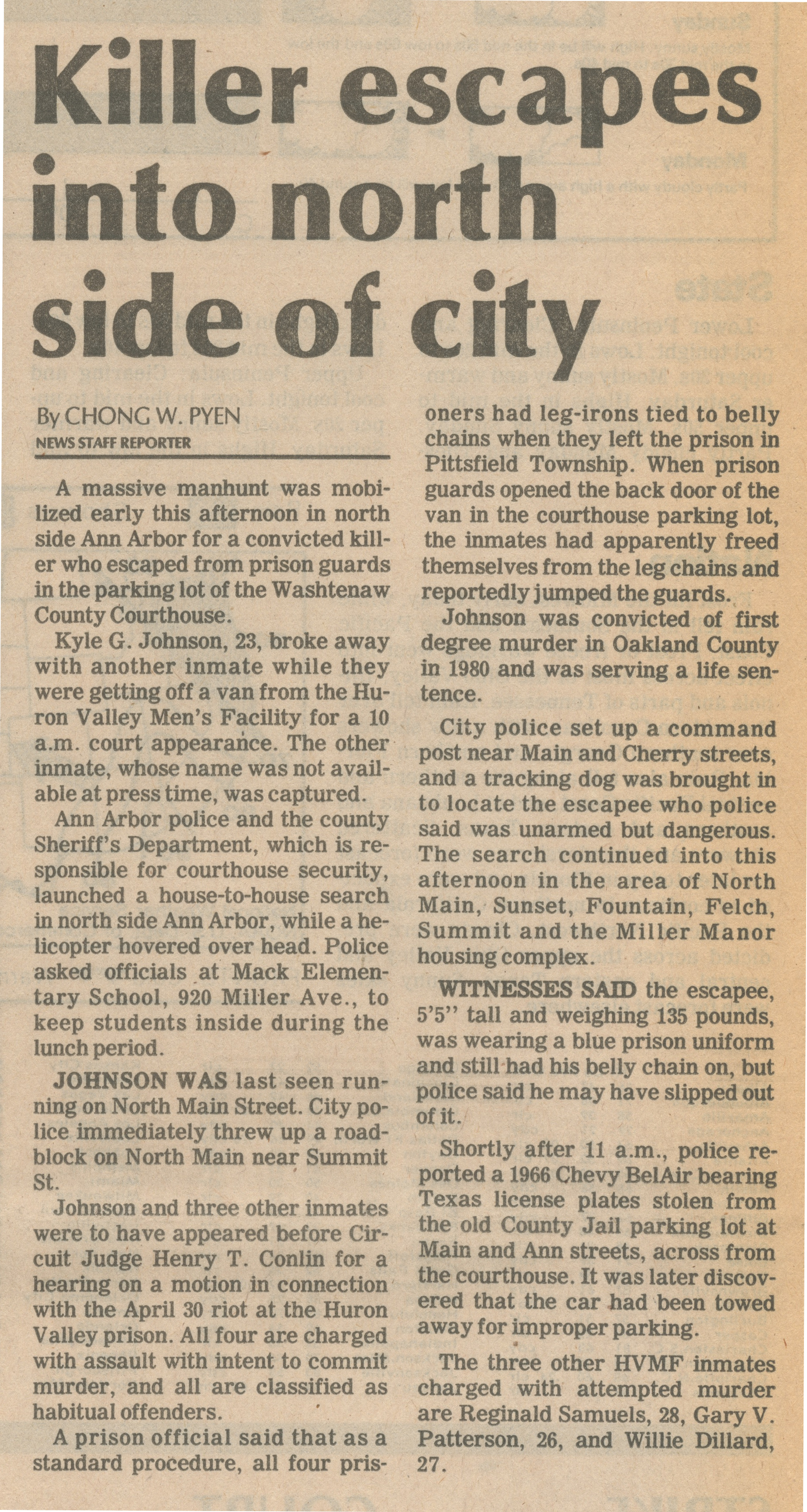 ﻿Killer escapes into north side of city

A massive manhunt was mobilized early this afternoon in north side Ann Arbor for a convicted killer who escaped from prison guards in the parking lot of the Washtenaw County Courthouse.

Kyle G. Johnson, 23, broke away with another inmate while they were getting off a van from the Huron Valley Men’s Facility for a 10 a.m. court appearance. The other inmate, whose name was not available at press time, was captured.

Ann Arbor police and the county Sheriff’s Department, which is responsible for courthouse security, launched a house-to-house search in north side Ann Arbor, while a helicopter hovered over head. Police asked officials at Mack Elementary School, 920 Miller Ave., to keep students inside during the lunch period.

Johnson and three other inmates were to have appeared before Circuit Judge Henry T. Conlin for a hearing on a motion in connection with the April 30 riot at the Huron Valley prison. All four are charged with assault with intent to commit murder, and ail are classified as habitual offenders.

A prison official said that as a standard procedure, all four prisoners had leg-irons tied to belly chains when they left the prison in Pittsfield Township. When prison guards opened the back door of the van in the courthouse parking lot, the inmates had apparently freed themselves from the leg chains and reportedly jumped the guards.

Johnson was convicted of first degree murder in Oakland County in 1980 and was serving a life sentence.

City police set up a command post near Main and Cherry streets, and a tracking dog was brought in to locate the escapee who police said was unarmed but dangerous. The search continued into this afternoon in the area of North Main, Sunset, Fountain, Felch, Summit and the Miller Manor housing complex.

WITNESSES SAID the escapee, 5’5” tall and weighing 135 pounds, was wearing a blue prison uniform and still had his belly chain on, but police said he may have slipped out of it.

Shortly after 11 a.m., police reported a 1966 Chevy BelAir bearing Texas license plates stolen from the old County Jail parking lot at Main and Ann streets, across from the courthouse. It was later discovered that the car had been towed away for improper parking.