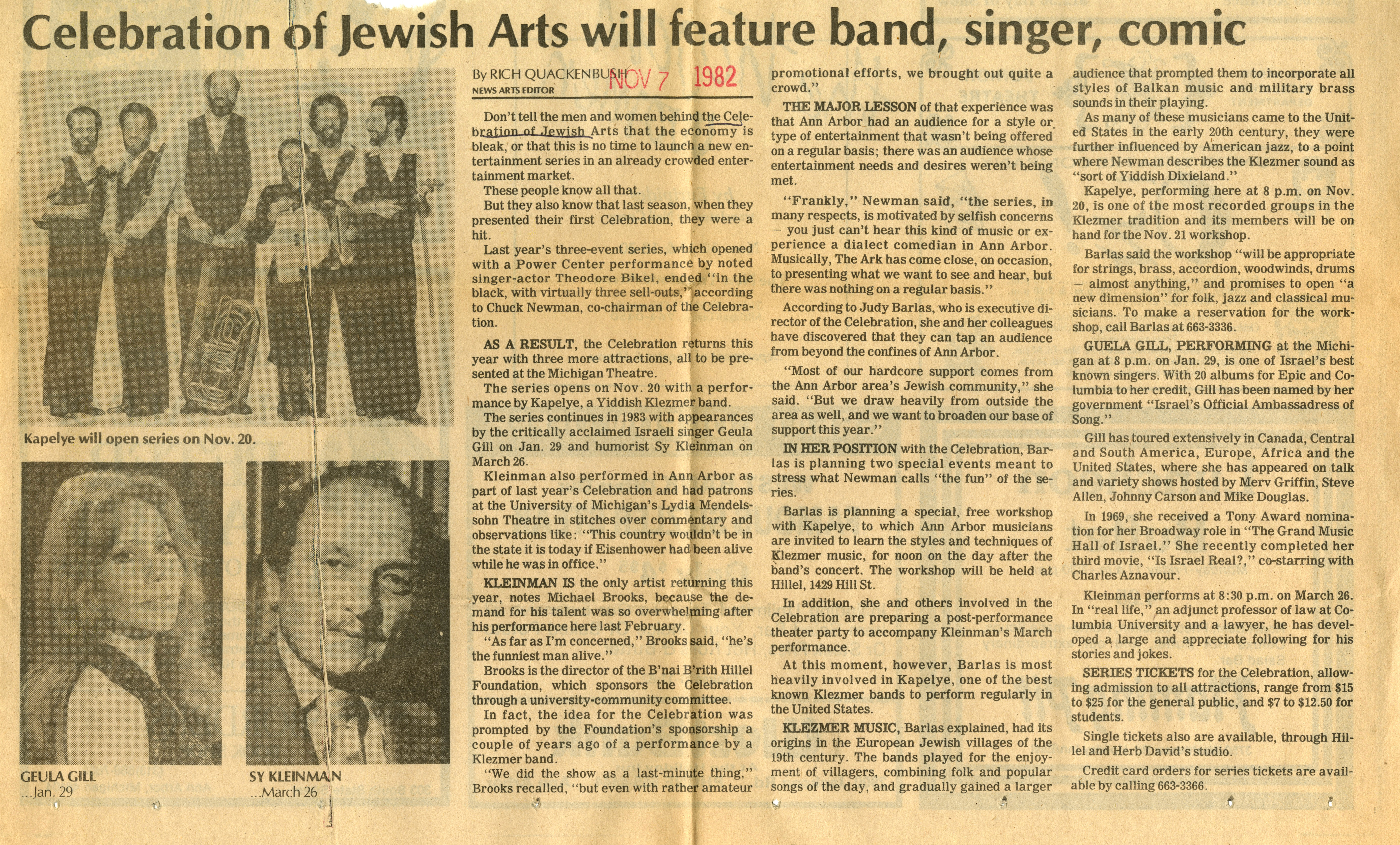 Don’t tell the men and women behind the Celebration of Jewish Arts that the economy is bleak, or that this is no time to launch a new entertainment series in an already crowded entertainment market.

These people know all that.

But they also know that last season, when they presented their first Celebration, they were a hit.

Last year’s three-event series, which opened with a Power Center performance by noted singer-actor Theodore Bikel, ended “in the black, with virtually three sell-outs,’'according to Chuck Newman, co-chairman of the Celebration.

AS A RESULT, the Celebration returns this year with three more attractions, all to be presented at the Michigan Theatre.

The series opens on Nov. 20 with a performance by Kapelye, a Yiddish Klezmer band.

The series continues in 1983 with appearances by the critically acclaimed Israeli singer Geula Gill on Jan. 29 and humorist Sy Kleinman on March 26.

Kleinman also performed in Ann Arbor as part of last year’s Celebration and had patrons at the University of Michigan’s Lydia Mendelssohn Theatre in stitches over commentary and observations like: “This country wouldn’t be in the state it is today if Eisenhower had been alive while he was in office.”

KLEINMAN IS the only artist returning this year, notes Michael Brooks, because the demand for his talent was so overwhelming after his performance here last February.

Brooks is the director of the B’nai B’rith Hillel Foundation, which sponsors the Celebration through a university-community committee.

In fact, the idea for the Celebration was prompted by the Foundation’s sponsorship a couple of years ago of a performance by a Klezmer band.

“We did the show as a last-minute thing,” Brooks recalled, “but even with rather amateur promotional efforts, we brought out quite a crowd.”

THE MAJOR LESSON of that experience was that Ann Arbor had an audience for a style or type of entertainment that wasn’t being offered on a regular basis; there was an audience whose entertainment needs and desires weren’t being met.

“Frankly,” Newman said, “the series, in many respects, is motivated by selfish concerns - you just can’t hear this kind of music or experience a dialect comedian in Ann Arbor. Musically, The Ark has come close, on occasion, to presenting what we want to see and hear, but there was nothing on a regular basis.”

According to Judy Barlas, who is executive director of the Celebration, she and her colleagues have discovered that they can tap an audience from beyond the confines of Ann Arbor.

“Most of our hardcore support comes from the Ann Arbor area’s Jewish community,” she said. “But we draw heavily from outside the area as well, and we want to broaden our base of support this year.”

IN HER POSITION with the Celebration, Barlas is planning two special events meant to stress what Newman calls “the fun” of the series.

Barlas is planning a special, free workshop with Kapelye, to which Ann Arbor musicians are invited to learn the styles and techniques of Klezmer music, for noon on the day after the band’s concert. The workshop will be held at Hillel, 1429 Hill St.

In addition, she and others involved in the Celebration are preparing a post-performance theater party to accompany Kleinman’s March performance.

At this moment, however, Barlas is most heavily involved in Kapelye, one of the best known Klezmer bands to perform regularly in the United States.

KLEZMER MUSIC, Barlas explained, had its origins in the European Jewish villages of the 19th century. The bands played for the enjoyment of villagers, combining folk and popular songs of the day, and gradually gained a larger audience that prompted them to incorporate all styles of Balkan music and military brass sounds in their playing.

As many of these musicians came to the United States in the early 20th century, they were further influenced by American jazz, to a point where Newman describes the Klezmer sound as “sort of Yiddish Dixieland.”

Kapelye, performing here at 8 p.m. on Nov. 20, is one of the most recorded groups in the Klezmer tradition and its members will be on hand for the Nov. 21 workshop.

Barlas said the workshop “will be appropriate for strings, brass, accordion, woodwinds, drums - almost anything,” and promises to open “a new dimension” for folk, jazz and classical musicians. To make a reservation for the workshop, call Barlas at 663-3336.

GUELA GILL, PERFORMING at the Michigan at 8 p.m. on Jan. 29, is one of Israel’s best known singers. With 20 albums for Epic and Columbia to her credit, Gill has been named by her government “Israel’s Official Ambassadress of Song.”

Gill has toured extensively in Canada, Central and South America, Europe, Africa and the United States, where she has appeared on talk and variety shows hosted by Merv Griffin, Steve Allen, Johnny Carson and Mike Douglas.

In 1969, she received a Tony Award nomination for her Broadway role in “The Grand Music Hall of Israel.” She recently completed her third movie, “Is Israel Real?,” co-starring with Charles Aznavour.

Kleinman performs at 8:30 p.m. on March 26. In “real life,” an adjunct professor of law at Columbia University and a lawyer, he has developed a large and appreciate following for his stories and jokes.

SERIES TICKETS for the Celebration, allowing admission to all attractions, range from $15 to $25 for the general public, and $7 to $12.50 for students.

Credit card orders for series tickets are available by calling 663-3366.

Kapelye will open series on Nov. 20