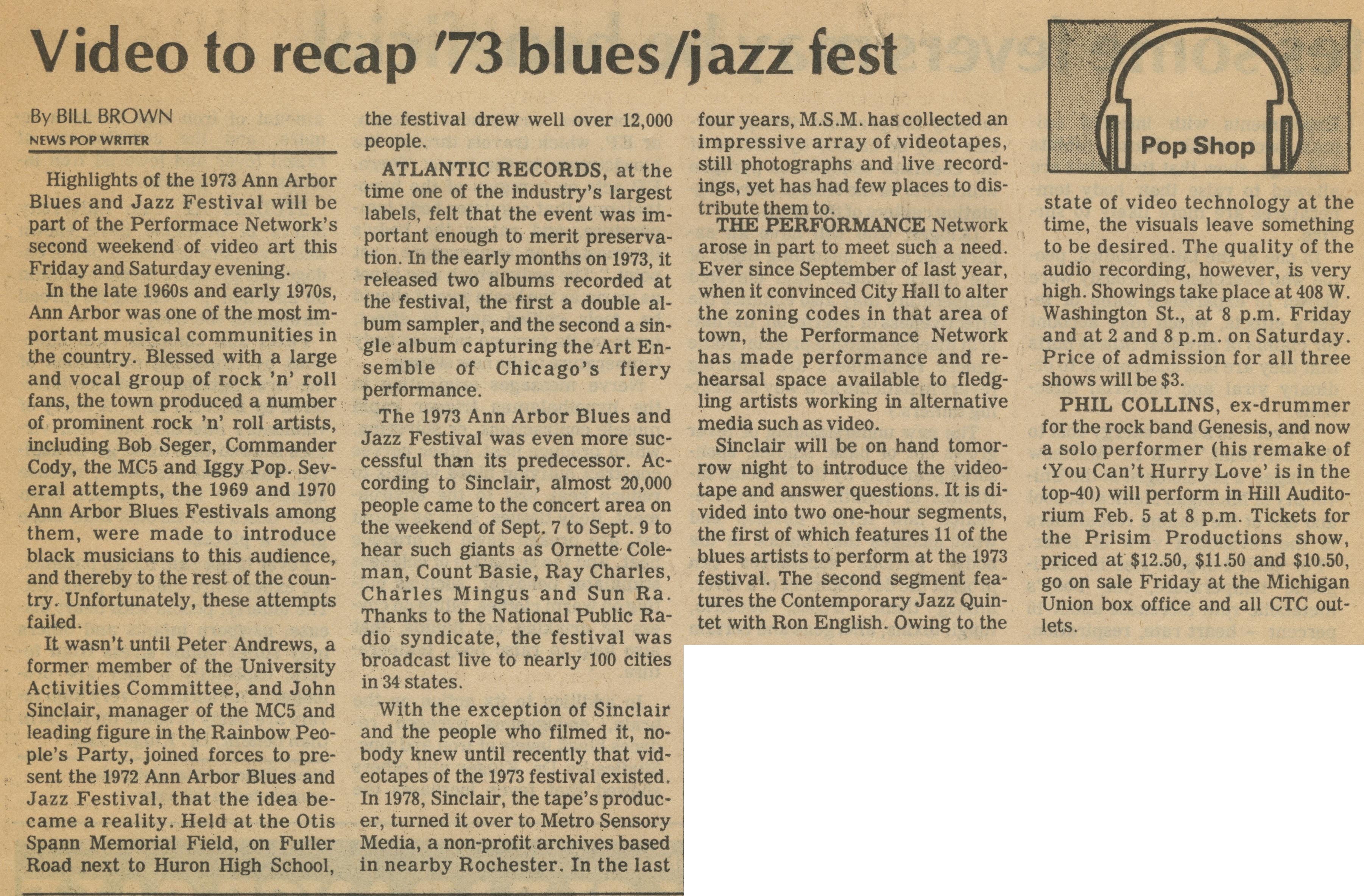 Highlights of the 1973 Ann Arbor Blues and Jazz Festival will be part of the Performance Network’s second weekend of video art this Friday and Saturday evening.

In the late 1960s and early 1970s, Ann Arbor was one of the most important musical communities in the country. Blessed with a large and vocal group of rock ’n’ roll fans, the town produced a number of prominent rock ’n’ roll artists, including Bob Seger, Commander Cody, the MC5 and Iggy Pop. Several attempts, the 1969 and 1970 Ann Arbor Blues Festivals among them, were made to introduce black musicians to this audience, and thereby to the rest of the country. Unfortunately, these attempts failed.

It wasn’t until Peter Andrews, a former member of the University Activities Committee, and John Sinclair, manager of the MC5 and leading figure in the Rainbow People’s Party, joined forces to present the 1972 Ann Arbor Blues and Jazz Festival, that the idea became a reality. Held at the Otis Spann Memorial Field, on Fuller Road next to Huron High School, the festival drew well over 12,000 people.

ATLANTIC RECORDS, at the time one of the industry’s largest labels, felt that the event was important enough to merit preservation. In the early months on 1973, it released two albums recorded at the festival, the first a double album sampler, and the second a single album capturing the Art Ensemble of Chicago’s fiery performance.

The 1973 Ann Arbor Blues and Jazz Festival was even more successful than its predecessor. According to Sinclair, almost 20,000 people came to the concert area on the weekend of Sept. 7 to Sept. 9 to hear such giants as Ornette Coleman, Count Basie, Ray Charles, Charles Mingus and Sun Ra. Thanks to the National Public Radio syndicate, the festival was broadcast live to nearly 100 cities in 34 states.

With the exception of Sinclair and the people who filmed it, nobody knew until recently that videotapes of the 1973 festival existed. In 1978, Sinclair, the tape’s producer, turned it over to Metro Sensory Media, a non-profit archives based in nearby Rochester. In the last four years, M.S.M. has collected an impressive array of videotapes, still photographs and live recordings, yet has had few places to distribute them to.

THE PERFORMANCE Network arose in part to meet such a need. Ever since September of last year, when it convinced City Hall to alter the zoning codes in that area of town, the Performance Network has made performance and rehearsal space available to fledgling artists working in alternative media such as video.

Sinclair will be on hand tomorrow night to introduce the videotape and answer questions. It is divided into two one-hour segments, the first of which features 11 of the blues artists to perform at the 1973 festival. The second segment features the Contemporary Jazz Quintet with Ron English. Owing to the state of video technology at the time, the visuals leave something to be desired. The quality of the audio recording, however, is very high. Showings take place at 408 W. Washington St., at 8 p.m. Friday and at 2 and 8 p.m. on Saturday. Price of admission for all three shows will be $3.

PHIL COLLINS, ex-drummer for the rock band Genesis, and now a solo performer (his remake of ‘You Can’t Hurry Love’ is in the top-40) will perform in Hill Auditorium Feb. 5 at 8 p.m. Tickets for the Prisim Productions show, priced at $12.50, $11.50 and $10.50, go on sale Friday at the Michigan Union box office and all CTC outlets.