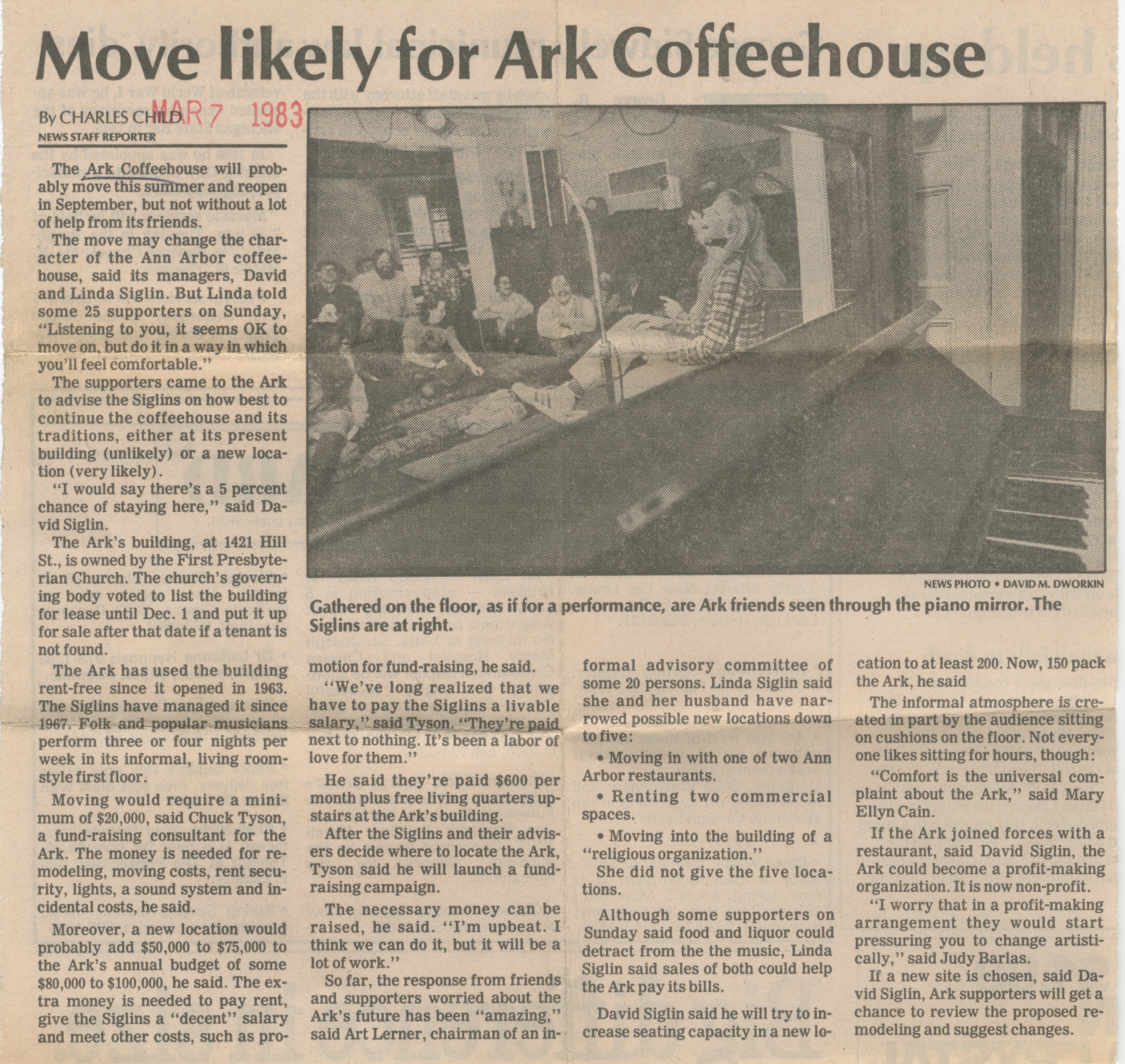 The Ark Coffeehouse will probably move this summer and reopen in September, but not without a lot of help from its friends.

The move may change the character of the Ann Arbor coffeehouse, said its managers, David and Linda Siglin. But Linda told some 25 supporters on Sunday, “Listening to you, it seems OK to move on. but do it in a way in which you’ll feel comfortable.”

The supporters came to the Ark to advise the Siglins on how best to continue the coffeehouse and its traditions, either at its present building (unlikely) or a new location (very likely).

“I would say there’s a 5 percent chance of staying here,” said David Siglin.

The Ark’s building, at 1421 Hill St., is owned by the First Presbyterian Church. The church’s governing body voted to list the building for lease until Dec. 1 and put it up for sale after that date if a tenant is not found.

The Ark has used the building rent-free since it opened in 1963. The Siglins have managed it since 1967. Folk and popular musicians perform three or four nights per week in its informal, living room-style first floor.

Moving would require a minimum of $20,000, said Chuck Tyson, a fund-raising consultant for the Ark. The money is needed for remodeling, moving costs, rent security, lights, a sound system and incidental costs, he said.

Gathered on the floor, as if for a performance, are Ark friends seen through the piano mirror. The Siglins are at right.

motion for fund-raising, he said.

“We’ve long realized that we have to pay the Siglins a livable salary,” said Tyson. “They’re paid next to nothing. It’s been a labor of love for them.”

He said they’re paid $600 per month plus free living quarters upstairs at the Ark’s building.

After the Siglins and their advisers decide where to locate the Ark, Tyson said he will launch a fundraising campaign.

The necessary money can be raised, he said. “I’m upbeat. I think we can do it, but it will be a lot of work.”

So far, the response from friends and supporters worried about the Ark’s future has been “amazing,” said Art Lerner, chairman of an in-

formal advisory committee of some 20 persons. Linda Siglin said she and her husband have narrowed possible new locations down to five:

• Moving in with one of two Ann Arbor restaurants.

• Moving into the building of a “religious organization.”

She did not give the five locations.

Although some supporters on Sunday said food and liquor could detract from the the music, Linda Siglin said sales of both could help the Ark pay its bills.

cation to at least 200. Now, 150 pack the Ark, he said The informal atmosphere is created in part by the audience sitting on cushions on the floor. Not everyone likes sitting for hours, though: “Comfort is the universal complaint about the Ark,” said Mary Ellyn Cain.

If the Ark joined forces with a restaurant, said David Siglin, the Ark could become a profit-making organization. It is now non-profit.

“I worry that in a profit-making arrangement they would start pressuring you to change artistically,” said Judy Barlas.

If a new site is chosen, said David Siglin, Ark supporters will get a chance to review the proposed remodeling and suggest changes.