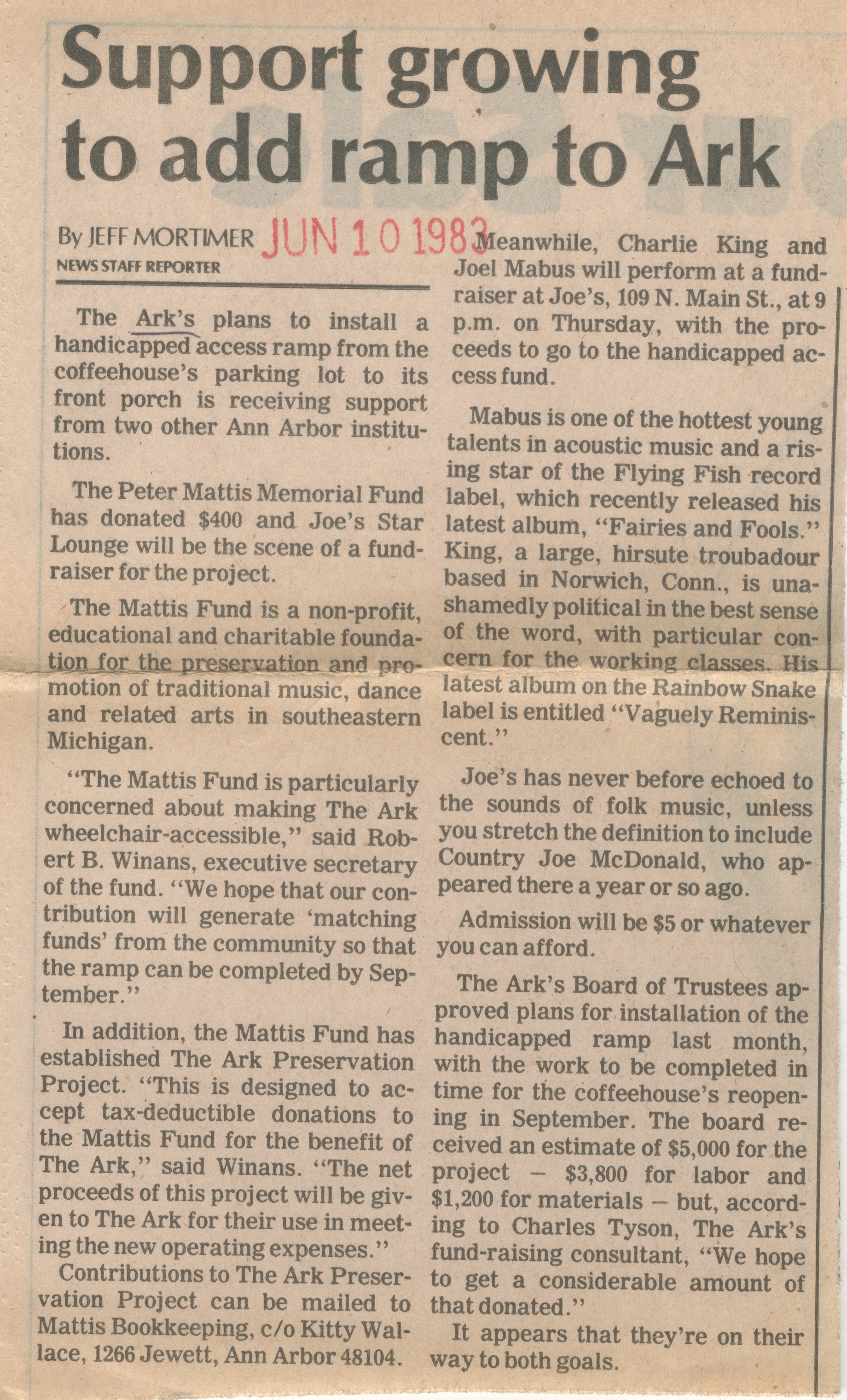 The Ark’s plans to install a handicapped access ramp from the coffeehouse’s parking lot to its front porch is receiving support from two other Ann Arbor institutions.

The Peter Mattis Memorial Fund has donated $400 and Joe’s Star Lounge will be the scene of a fundraiser for the project.

The Mattis Fund is a non-profit, educational and charitable foundation for the preservation and promotion of traditional music, dance and related arts in southeastern Michigan.

“The Mattis Fund is particularly concerned about making The Ark wheelchair-accessible,” said Robert B. Winans, executive secretary of the fund. “We hope that our contribution will generate ‘matching funds’ from the community so that the ramp can be completed by September.”

In addition, the Mattis Fund has established The Ark Preservation Project. “This is designed to accept tax-deductible donations to the Mattis Fund for the benefit of The Ark,” said Winans. “The net proceeds of this project will be given to The Ark for their use in meeting the new operating expenses.” Contributions to The Ark Preservation Project can be mailed to Mattis Bookkeeping, c/o Kitty Wallace, 1266 Jewett, Ann Arbor 48104.

Meanwhile, Charlie King and Joel Mabus will perform at a fundraiser at Joe’s, 109 N. Main St., at 9 p.m. on Thursday, with the proceeds to go to the handicapped access fund.

Mabus is one of the hottest young talents in acoustic music and a rising star of the Flying Fish record label, which recently released his latest album, “Fairies and Fools.” King, a large, hirsute troubadour based in Norwich, Conn., is unashamedly political in the best sense of the word, with particular concern for the working classes. His latest album on the Rainbow Snake label is entitled “Vaguely Reminiscent.”

Joe’s has never before echoed to the sounds of folk music, unless you stretch the definition to include Country Joe McDonald, who appeared there a year or so ago.

Admission will be $5 or whatever you can afford.

The Ark’s Board of Trustees approved plans for installation of the handicapped ramp last month, with the work to be completed in time for the coffeehouse’s reopening in September. The board received an estimate of $5,000 for the project - $3,800 for labor and $1,200 for materials - but, according to Charles Tyson, The Ark’s fund-raising consultant, “We hope to get a considerable amount of that donated.”

It appears that they’re on their way to both goals.