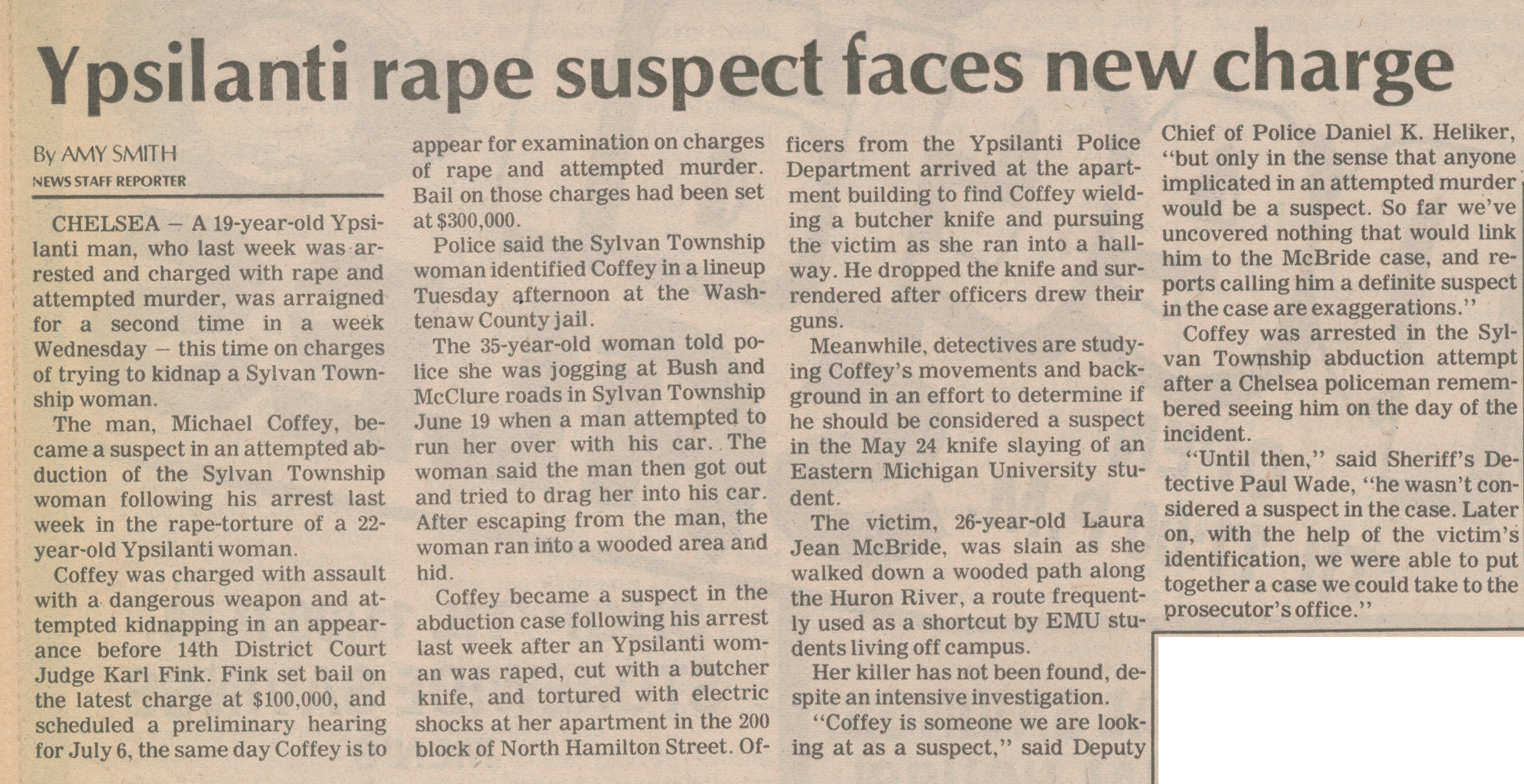 CHELSEA - A 19-year-old Ypsilanti man, who last week was arrested and charged with rape and attempted murder, was arraigned for a second time in a week Wednesday - this time on charges of trying to kidnap a Sylvan Township woman.
The man, Michael Coffey, became a suspect in an attempted abduction of the Sylvan township woman following his arrest last week in the rape-torture of a 22-year-old Ypsilanti woman.
Coffey was charged with assault with a dangerous weapon and attempted kidnapping in an appearance before 14th District Court Judge Karl Fink. Fink set bail on the latest charge at $100,000, and scheduled a preliminary hearing for July 6, the same day Coffey is to appear for examination on charges of rape and attempted murder. Bail on those charges had been set at $300,000.
Police said the Sylvan Township woman identified Coffey in a lineup Tuesday afternoon at the Washtenaw County jail.
The 35-year-old woman told police she was jogging at Bush and McClure roads in Sylvan Township June 19 when a man attempted to run her over with his car. The woman said the man then got out and tried to drag her into his car. After escaping from the man, the woman ran into a wooded area and hid.
Coffey became a suspect in the abduction case following his arrest last week after an Ypsilanti woman was raped, cut with a butcher knife, and tortured with electric shocks at her apartment in the 200 block of North Hamilton Street. Officers from the Ypsilanti Police Department arrived at the apartment building to find Coffey wielding a butcher knife and pursuing the victim as she ran into a hallway. He dropped the knife and surrendered after officers drew their guns.
Meanwhile, detectives are studying Coffey's movements and background in an effort to determine if he should be considered a suspect in the May 24 knife slaying of an Eastern Michigan University student.
The victim, 26-year-old Laura Jean McBride, was slain as she walked down a wooded path along the Huron River, a route frequently used as a shortcut by EMU students living off campus.
Her killer has not been found, despite an intensive investigation.
"Coffey is someone we are looking at as a suspect," said Deputy Chief of Police Daniel K. Heliker, "but only in the sense that anyone implicated in an attempted murder would be a suspect. So far we've uncovered nothing that would link him to the McBride case, and reports calling him a definite suspect in the case are exaggerations."
Coffey was arrested in the Sylvan Township abduction attempt after a Chelsea policeman remembered seeing him on the day of the incident.
"Until then," said Sheriff's Detective Paul Wade, "he wasn't considered a suspect in the case. Later on, with the help of the victim's identification, we were able to put together a case we could take to the prosecutor's office."