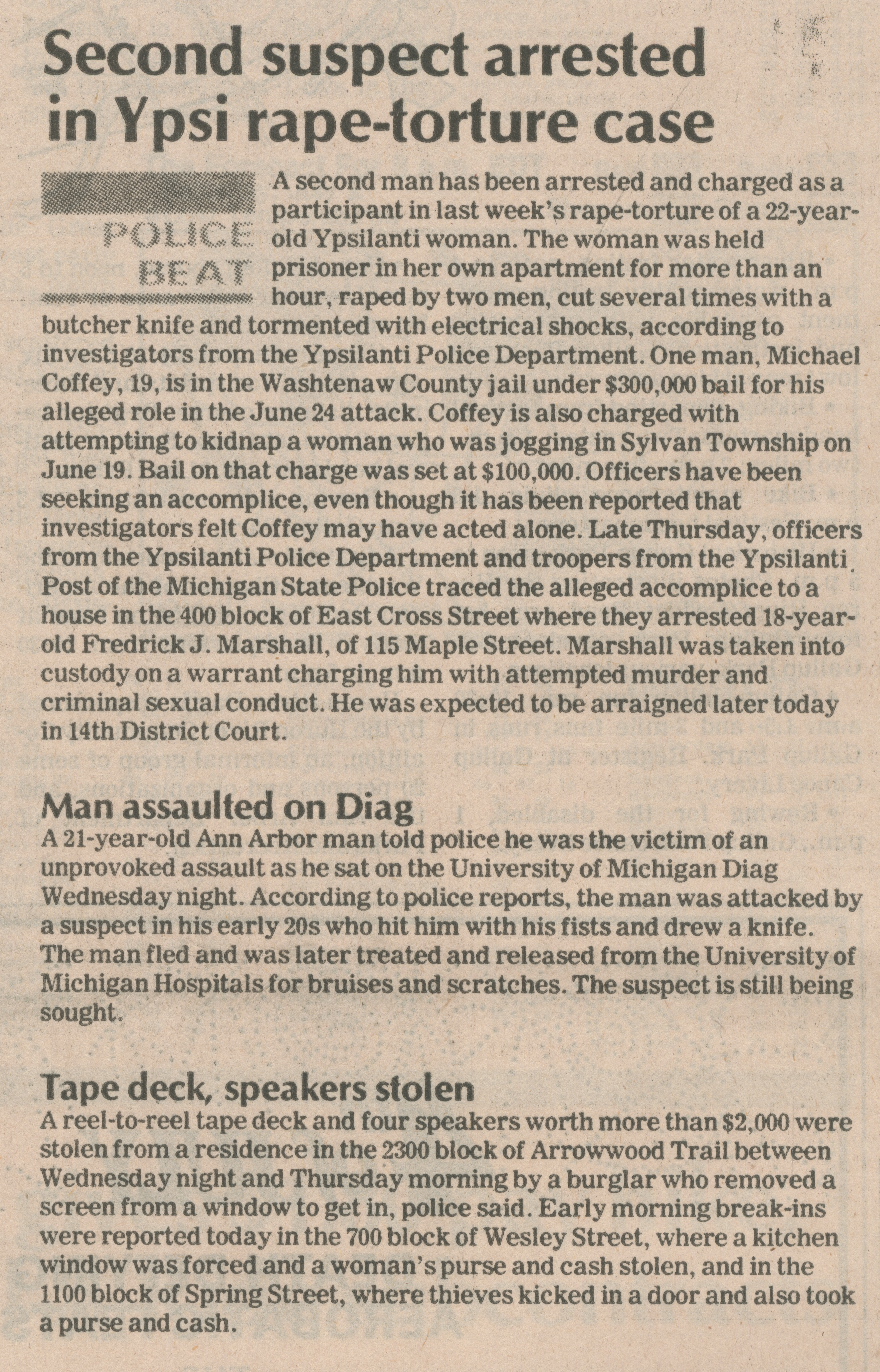 Second suspect arrested in Ypsi rape-torture case
A second man has been arrested and charged as a participant in last week's rape-torture of a 22-year-old Ypsilanti woman. The woman was held prisoner in her own apartment for more than an hour, raped by two men, cut several times with a butcher knife and tormented with electrical shocks, according to investigators from the Ypsilanti Police Department. One man, Michael Coffey, 19, is in the Washtenaw County jail under $300,000 bail for his alleged role in the June 24 attack. Coffey is also charged with attempting to kidnap a woman who was jogging in Sylvan Township on June 19. Bail on that charge was set at $100,000. Officers have been seeking an accomplice, even though it has been reported that investigators felt Coffey may have acted alone. Late Thursday, officers from the Ypsilanti Police Department and troopers from the Ypsilanti Post of the Michigan State Police traced the alleged accomplice to a house in the 400 block of East Cross Street where they arrested 18-year-old Frederick J. Marshall, of 115 Maple Street. Marshall was taken into custody on a warrant charging him with attempted murder and criminal sexual conduct. He was expected to be arraigned later today in 14th District Court.

Man assaulted on Diag
A 21-year-old Ann Arbor man told police he was the victim of an unprovoked assault as he sat on the University of Michigan Diag Wednesday night. According to police reports, the man was attacked by a suspect in his early 20s who hit him with his fists and drew a knife. The man fled and was later treated and released from the University of Michigan Hospitals for bruises and scratches. The suspect is still being sought.

Tape desk, speakers stolen
A reel-to-reel tape deck and four speakers worth more than $2,000 were stolen from a residence in the 2300 block of Arrowwood Trail between Wednesday night and Thursday morning by a burglar who removed a screen from a window to get in, police said. Early morning break-ins were reported today in the 700 block of Wesley Street, where a kitchen window was forced and a woman's purse and cash stolen, and in the 1100 block of Spring Street, where thieves kicked in a door and also took a purse and cash.