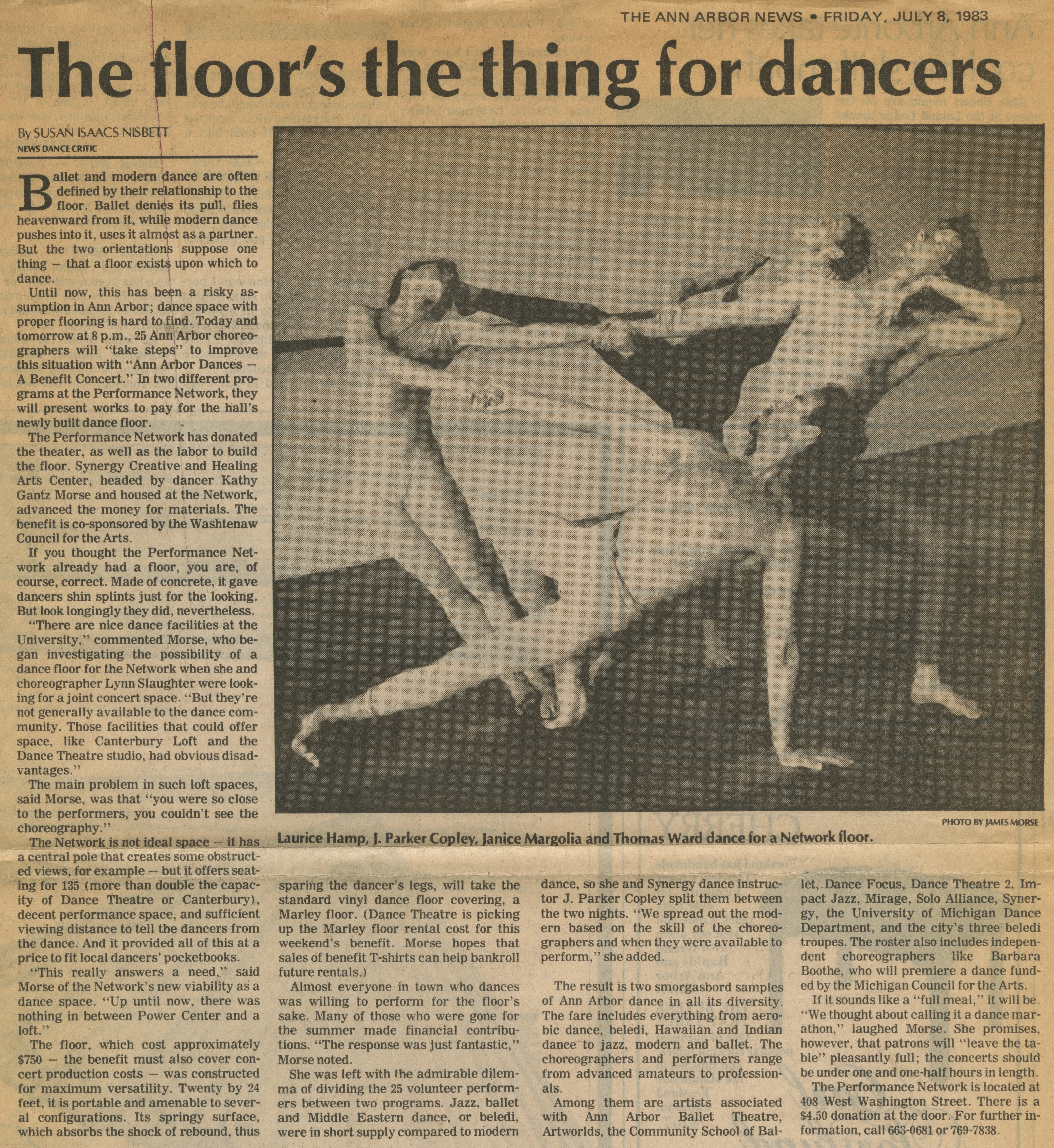 Ballet and modern dance are often defined by their relationship to the floor. Ballet denies its pull, flies heavenward from it, while modern dance pushes into it. uses it almost as a partner. But the two orientations suppose one thing - that a floor exists upon which to dance.

Until now, this has been a risky assumption in Ann Arbor; dance space with proper flooring is hard to find. Today and tomorrow at 8 p.m., 25 Ann Arbor choreographers will “take steps" to improve this situation with “Ann Arbor Dances - A Benefit Concert." In two different programs at the Performance Network, they will present works to pay for the hall’s newly built dance floor.

The Performance Network has donated the theater, as well as the labor to build the floor. Synergy Creative and Healing Arts Center, headed by dancer Kathy Gantz Morse and housed at the Network, advanced the money for materials. The benefit is co-sponsored by the Washtenaw Council for the Arts.

If you thought the Performance Network already had a floor, you are, of course, correct. Made of concrete, it gave dancers shin splints just for the looking. But look longingly they did, nevertheless.

“There are nice dance facilities at the University," commented Morse, who began investigating the possibility of a dance floor for the Network when she and choreographer Lynn Slaughter were looking for a joint concert space. "But they're not generally available to the dance community. Those facilities that could offer space, like Canterbury Loft and the Dance Theatre studio, had obvious disadvantages.

The main problem in such loft spaces, said Morse, was that “you were so close to the performers, you couldn't see the choreography."

The Network is not ideal space - it has a central pole that creates some obstructed views, for example - but it offers seating for 135 (more than double the capacity of Dance Theatre or Canterbury), decent performance space, and sufficient viewing distance to tell the dancers from the dance. And it provided all of this at a price to fit local dancers’ pocketbooks.

"This really answers a need." said Morse of the Network's new viability as a dance space. “Up until now. there was nothing in between Power Center and a loft."

The floor, which cost approximately $750 - the benefit must also cover concert production costs - was constructed for maximum versatility. Twenty by 24 feet, it is portable and amenable to several configurations. Its springy surface, which absorbs the shock of rebound, thus sparing the dancer’s legs, will take the standard vinyl dance floor covering, a Marley floor. (Dance Theatre is picking up the Marley floor rental cost for this weekend’s benefit. Morse hopes that sales of benefit T-shirts can help bankroll future rentals.)

Almost everyone in town who dances was willing to perform for the floor’s sake. Many of those who were gone for the summer made financial contributions. “The response was just fantastic," Morse noted.

She was left with the admirable dilemma of dividing the 25 volunteer performers between two programs. Jazz, ballet and Middle Eastern dance, or beledi, were in short supply compared to modern dance, so she and Synergy dance instructor J. Parker Copley split them between the two nights. "We spread out the modern based on the skill of the choreographers and when they were available to perform, ” she added.

The result is two smorgasbord samples of Ann Arbor dance in all its diversity. The fare includes everything from aerobic dance, beledi, Hawaiian and Indian dance to jazz, modern and ballet. The choreographers and performers range from advanced amateurs to professionals.

Among them are artists associated with Ann Arbor Ballet Theatre, Artworlds, the Community School of Ballet, Dance Focus, Dance Theatre 2, Impact Jazz, Mirage, Solo Alliance, Synergy, the University of Michigan Dance Department, and the city's three beledi troupes. The roster also includes independent choreographers like Barbara Boothe, who will premiere a dance funded by the Michigan Council for the Arts.

If it sounds like a "full meal," it will be. "We thought about calling it a dance marathon,” laughed Morse. She promises, however, that patrons will "leave the table” pleasantly full; the concerts should be under one and one-half hours in length.