U Finds Buyers For 2 of 3 Argus Buildings 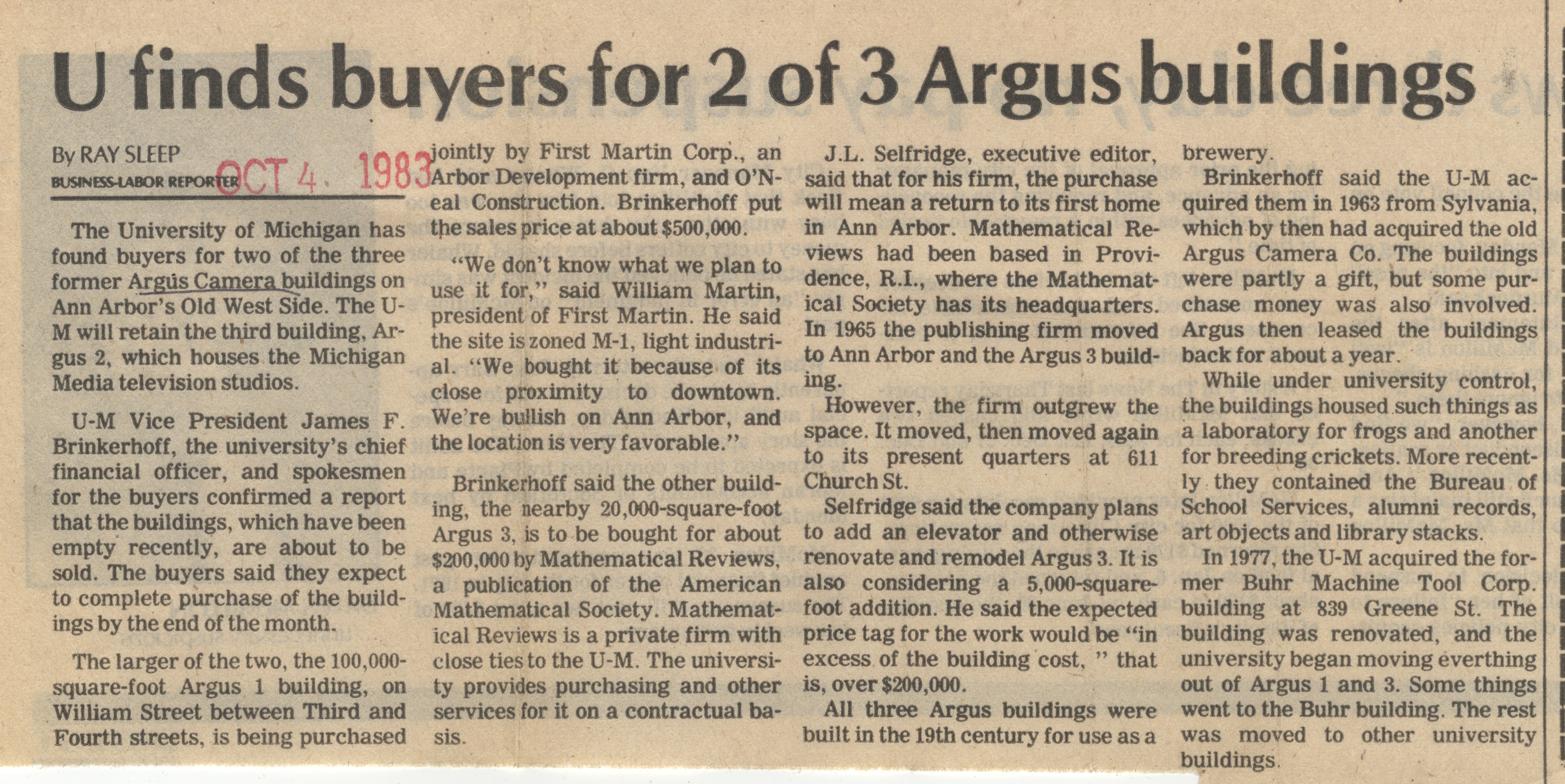 U finds buyers for 2 of 3 Argus buildings

The University of Michigan has
found buyers for two of the three
former Ar^us Camera buildings on
Ann Arbor's Old West Side. The U-
M will retain the th?rd building, Ar-
gus 2, which houses the Michigan
Media television studios.

U-M Vice President James F.
Brinkerhoff, the university's chief
financial officer, and spokesmen
for the buyers confirmed a report
that the hwWr^s, which have been
empty r , are about to be
sold. The buyers said they expect
to complete purchase of the build-
ings by the end of the month.

jointly by First Martin Corp., an
Arbor Development firm, and O'N-
eal Construction. Brinkerhoff put
the sales price at about $500,000.

"We don't know what we plan to
use it for," said William Martin,
president of First Martin. He said
the site is zoned M-l, light industri-
al. "We bought it because of its
close proximity to downtown.
We're bullish on Ann Arbor, and
the location is very favorable."

Brinkerhoff said the other build-
ing, the nearby 20,000-square-foot
Argus 3, is to be bought for about
$200,000 by Mathematical Reviews,
a publication of the American
Mathematical Society. Mathemat-
ical Reviews is a private firm with
close ties to the U-M. The universi-
ty provides purchasing and other
services for it on a contractual ba-
sis.

J.L. Selfridge, executive editor,
said that for his firm, the purchase
will mean a return to its first home
in Ann Arbor. Mathematical Re-
views had been based in Provi-
dence, R.I., where the Mathemat-
ical Society has its headquarters.
In 1965 the publishing firm moved
to Ann Arbor and the Argus 3 build-
ing.

However, the firm outgrew the
space. It moved, then moved agat"
to its present quarters at (;

Selfridge saki ipany plans
to add an elevator and otherwise
renovate andremodel Argus 3. It is
also considering a 5,000-square-
foot addition. He said the expected
price tag for the work would be "in
excess of the building cost, " that
is, over $200,000.

Brinkerhoff said the U-M ac-
quired them in 1963 from Sylvania,
which by then had acquired the old
Argus Camera Co. The buildings
were partly a gift, but some pur-
chase money was also involved.
Argus then leased the buildings
back for about a year.

While under university control,
the buildings housed such things as
••> laboratory for frogs and another

In 1977, the U-M acquired the for-
mer Buhr Machine Tool Corp.
building at 839 Greene St. The
building was renovated, and the
university began moving everthinr
out of Argus 1 and 3. Some thingis ^
went to the Buhr building. The rest
was moved to other university
buildings. /