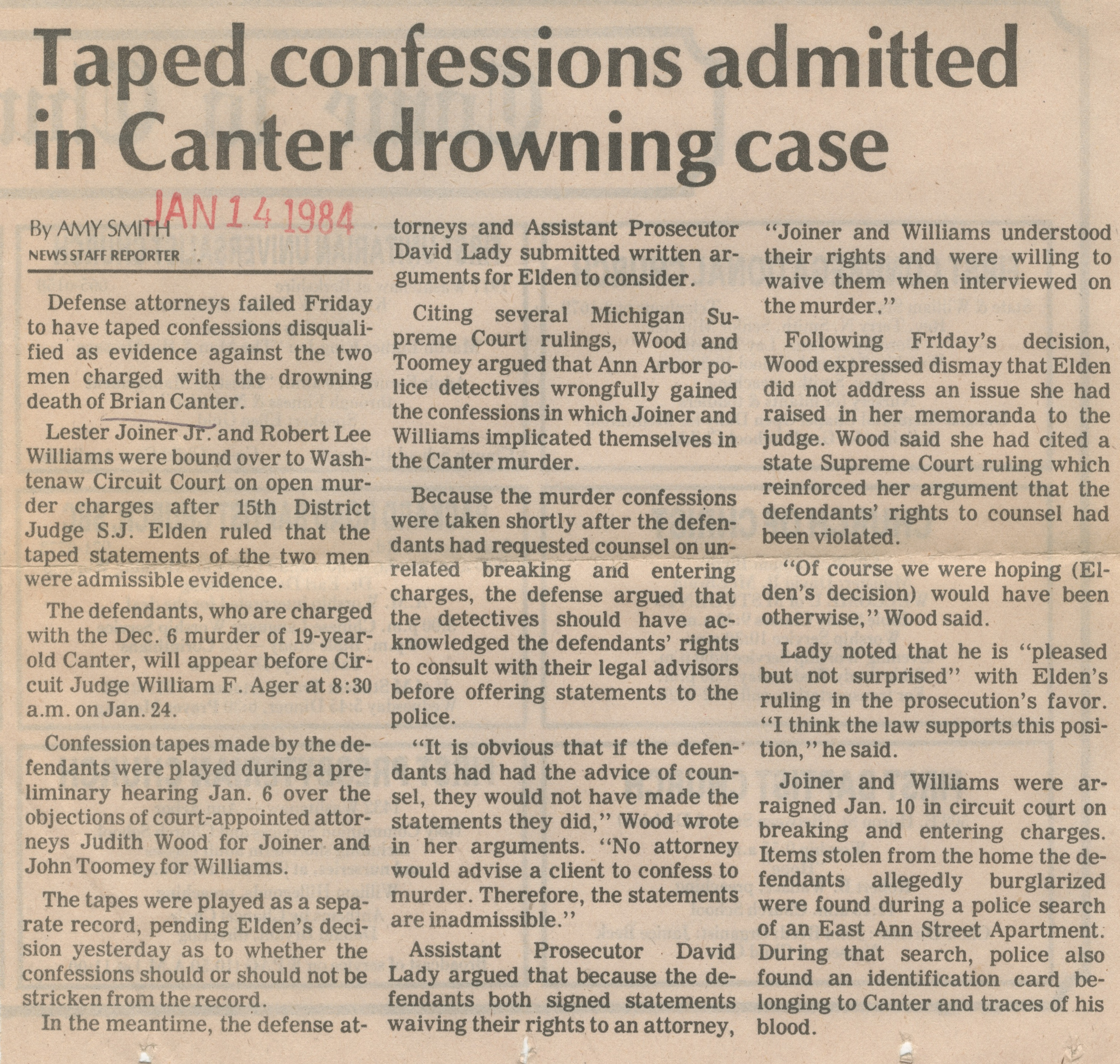 Defense attorneys failed Friday to have taped confessions disqualified as evidence against the two men charged with the drowning death of Brian Canter.

Lester Joiner Jr. and Robert Lee Williams were bound over to Washtenaw Circuit Court on open murder charges after 15th District Judge S.J. Elden ruled that the taped statements of the two men were admissible evidence.

The defendants, who are charged with the Dec. 6 murder of 19-year-old Canter, will appear before Circuit Judge William F. Ager at 8:30 a.m. on Jan. 24.

Confession tapes made by the defendants were played during a preliminary hearing Jan. 6 over the objections of court-appointed attorneys Judith Wood for Joiner and John Toomey for Williams.

The tapes were played as a separate record, pending Elden’s decision yesterday as to whether the confessions should or should not be stricken from the record.

In the meantime, the defense attorneys and Assistant Prosecutor David Lady submitted written arguments for Elden to consider.

Citing several Michigan Supreme Court rulings, Wood and Toomey argued that Ann Arbor police detectives wrongfully gained the confessions in which Joiner and Williams implicated themselves in the Canter murder.

Because the murder confessions were taken shortly after the defendants had requested counsel on unrelated breaking and entering charges, the defense argued that the detectives should have acknowledged the defendants’ rights to consult with their legal advisors before offering statements to the police.

“It is obvious that if the defendants had had the advice of counsel, they would not have made the statements they did,” Wood wrote in her arguments. “No attorney would advise a client to confess to murder. Therefore, the statements are inadmissible.”

Assistant Prosecutor David Lady argued that because the defendants both signed statements waiving their rights to an attorney, “Joiner and Williams understood their rights and were willing to waive them when interviewed on the murder.”

Following Friday’s decision, Wood expressed dismay that Elden did not address an issue she had raised in her memoranda to the judge. Wood said she had cited a state Supreme Court ruling which reinforced her argument that the defendants’ rights to counsel had been violated.

“Of course we were hoping (Elden’s decision) would have been otherwise,” Wood said.

Lady noted that he is “pleased but not surprised” with Elden’s ruling in the prosecution’s favor. “I think the law supports this position,” he said.

Joiner and Williams were arraigned Jan. 10 in circuit court on breaking and entering charges. Items stolen from the home the defendants allegedly burglarized were found during a police search of an East Ann Street Apartment. During that search, police also found an identification card belonging to Canter and traces of his blood.