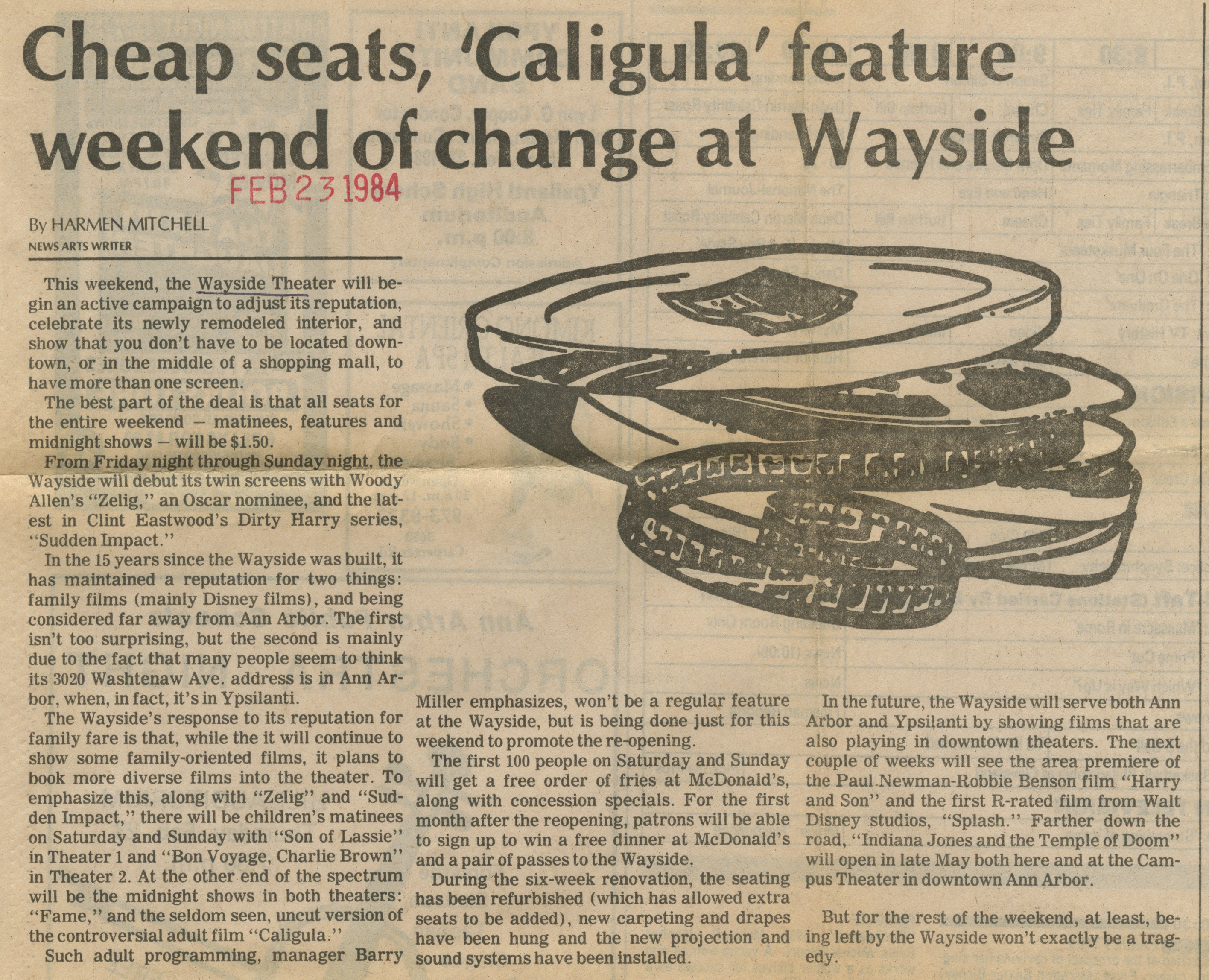 This weekend, the Wayside Theater will begin an active campaign to adjust its reputation, celebrate its newly remodeled interior, and show that you don't have to be located downtown, or in the middle of a shopping mall, to have more than one screen.

The best part of the deal is that all seats for the entire weekend -- matinees, features and midnight shows -- will be $1.50.

From Friday night through Sunday night, the Wayside will debut its twin screens with Woody Allen’s "Zelig," an Oscar nominee, and the latest in Clint Eastwood’s Dirty Harry series, "Sudden Impact.”

In the 15 years since the Wayside was built, it has maintained a reputation for two things: family films (mainly Disney films), and being considered far away from Ann Arbor. The first isn't too surprising, but the second is mainly due to the fact that many people seem to think its 3020 Washtenaw Ave. address is in Ann Arbor, when, in fact, it’s in Ypsilanti.

The Wayside's response to its reputation for family fare is that, while the it will continue to show some family-oriented films, it plans to book more diverse films into the theater. To emphasize this, along with “Zelig” and “Sudden Impact,” there will be children's matinees on Saturday and Sunday with “Son of Lassie” in Theater 1 and “Bon Voyage, Charlie Brown” in Theater 2. At the other end of the spectrum will be the midnight shows in both theaters: "Fame,” and the seldom seen, uncut version of the controversial adult film “Caligula."

Such adult programming, manager Barry Miller emphasizes, won’t be a regular feature at the Wayside, but is being done just for this weekend to promote the re-opening.

The first 100 people on Saturday and Sunday will get a free order of fries at McDonald’s, along with concession specials. For the first month after the reopening, patrons will be able to sign up to win a free dinner at McDonald’s and a pair of passes to the Wayside.

During the six-week renovation, the seating has been refurbished (which has allowed extra seats to be added), new carpeting and drapes have been hung and the new projection and sound systems have been installed.

In the future, the Wayside will serve both Ann Arbor and Ypsilanti by showing films that are also playing in downtown theaters. The next couple of weeks will see the area premiere of the Paul Newman-Robbie Benson film “Harry and Son” and the first R-rated film from Walt Disney studios, “Splash.” Farther down the road, “Indiana Jones and the Temple of Doom” will open in late May both here and at the Campus Theater in downtown Ann Arbor.

But for the rest of the weekend, at least, being left by the Wayside won’t exactly be a tragedy.