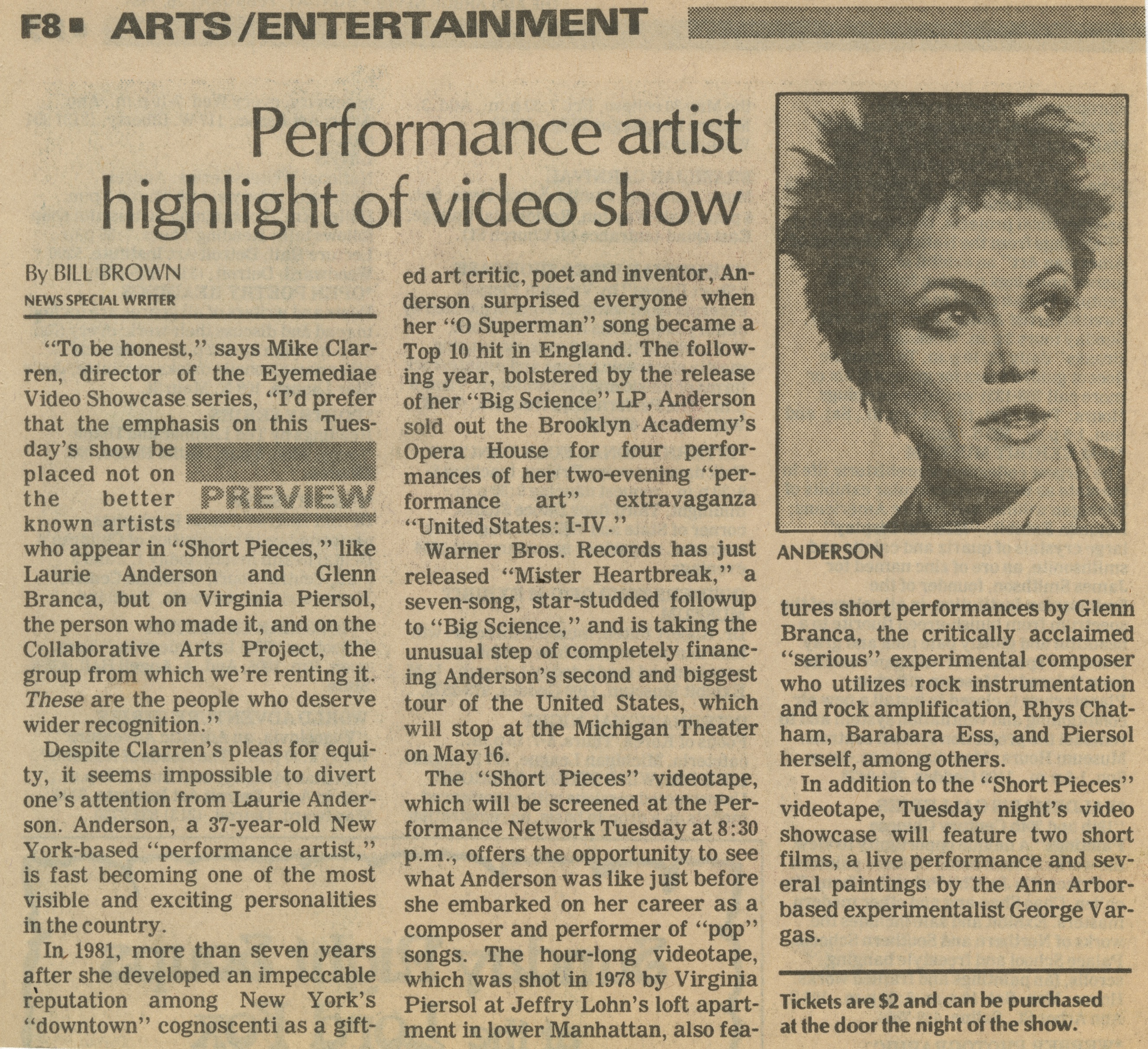 “To be honest,” says Mike Clarren, director of the Eyemediae Video Showcase series, “I’d prefer that the emphasis on this Tuesday’s show be placed not on the better known artists who appear in “Short Pieces,” like Laurie Anderson and Glenn Branca, but on Virginia Piersol, the person who made it, and on the Collaborative Arts Project, the group from which we’re renting it. These are the people who deserve wider recognition.”

Despite Clarren’s pleas for equity, it seems impossible to divert one’s attention from Laurie Anderson. Anderson, a 37-year-old New York-based “performance artist,” is fast becoming one of the most visible and exciting personalities in the country.

In. 1981, more than seven years after she developed an impeccable reputation among New York’s “downtown” cognoscenti as a gifted art critic, poet and inventor, Anderson surprised everyone when her “0 Superman” song became a Top 10 hit in England. The following year, bolstered by the release of her “Big Science” LP, Anderson sold out the Brooklyn Academy’s Opera House for four performances of her two-evening “performance art” extravaganza “United States: I-IV.”

Warner Bros. Records has just released “Mister Heartbreak,” a seven-song, star-studded followup to “Big Science,” and is taking the unusual step of completely financing Anderson’s second and biggest tour of the United States, which will stop at the Michigan Theater on May 16.

The “Short Pieces” videotape, which will be screened at the Performance Network Tuesday at 8:30 p.m., offers the opportunity to see what Anderson was like just before she embarked on her career as a composer and performer of “pop” songs. The hour-long videotape, which was shot in 1978 by Virginia Piersol at Jeffry Lohn’s loft apartment in lower Manhattan, also features short performances by Glenn Branca, the critically acclaimed “serious” experimental composer who utilizes rock instrumentation and rock amplification, Rhys Chatham, Barabara Ess, and Piersol herself, among others.

Tickets are $2 and can be purchased at the door the night of the show.