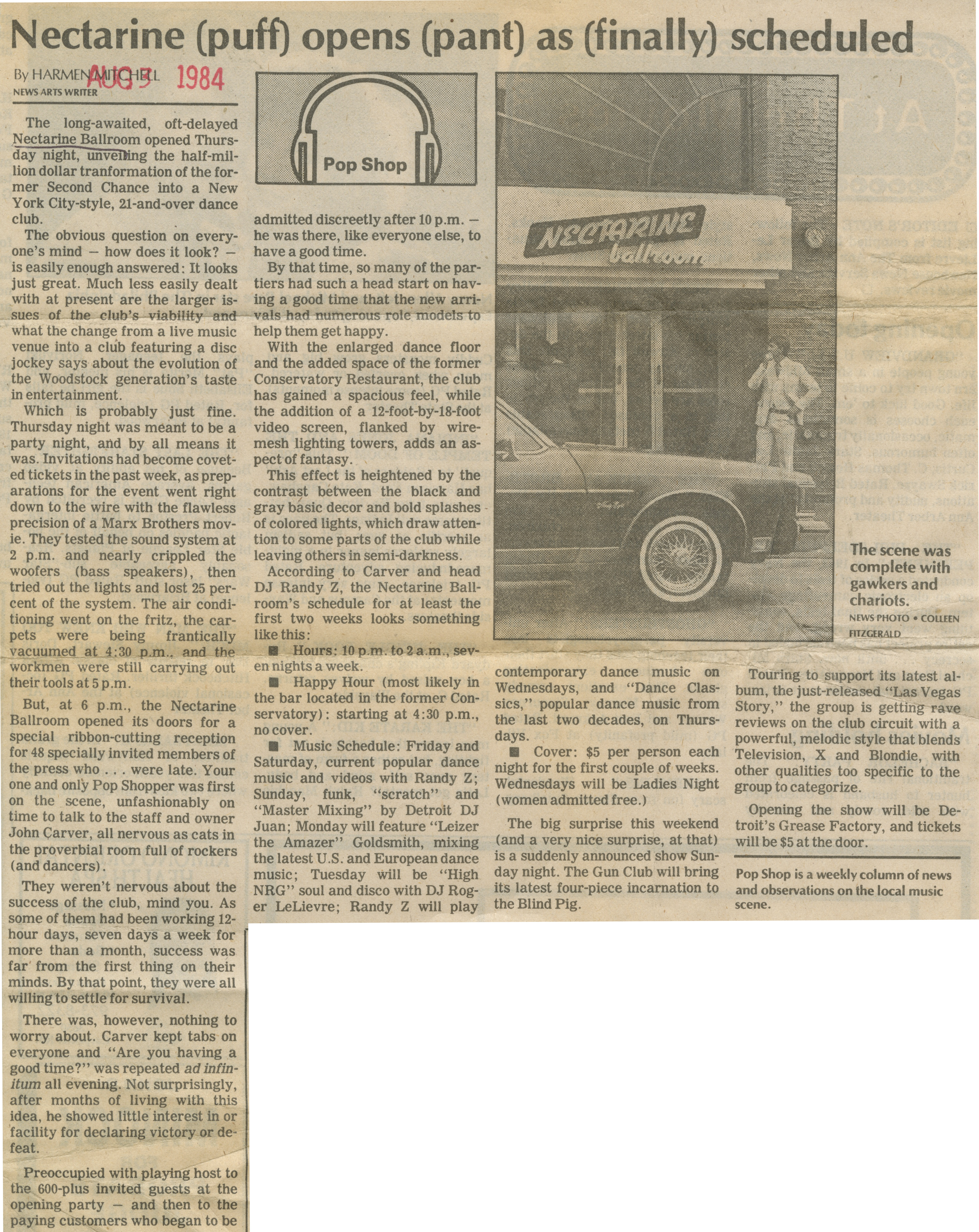 The obvious question on everyone’s mind -- how does it look? -- is easily enough answered: It looks just great. Much less easily dealt with at present are the larger issues of the club’s viability and what the change from a live music venue into a club featuring a disc jockey says about the evolution of the Woodstock generation’s taste in entertainment.

Which is probably just fine. Thursday night was meant to be a party night, and by all means it was. Invitations had become coveted tickets in the past week, as preparations for the event went right down to the wire with the flawless precision of a Marx Brothers movie. They tested the sound system at 2 p.m. and nearly crippled the woofers (bass speakers), then tried out the lights and lost 25 percent of the system. The air conditioning went on the fritz, the carpets were being frantically vacuumed at 4:30 p.m., and the workmen were still carrying out their tools at 5 p.m.

But, at 6 p.m., the Nectarine Ballroom opened its doors for a special ribbon-cutting reception for 48 specially invited members of the press who . . . were late. Your one and only Pop Shopper was first on the scene, unfashionably on time to talk to the staff and owner John Carver, all nervous as cats in the proverbial room full of rockers (and dancers).

They weren’t nervous about the success of the club, mind you. As some of them had been working 12-hour days, seven days a week for more than a month, success was far from the first thing on their minds. By that point, they were all willing to settle for survival.

There was, however, nothing to worry about. Carver kept tabs on everyone and “Are you having a good time?” was repeated ad infinitum all evening. Not surprisingly, after months of living with this idea, he showed little interest in or facility for declaring victory or defeat.

Preoccupied with playing host to the 600-plus invited guests at the opening party -- and then to the paying customers who began to be admitted discreetly after 10 p.m. -- he was there, like everyone else, to have a good time.

By that time, so many of the partiers had such a head start on having a good time that the new arrivals had numerous role models to help them get happy.

With the enlarged dance floor and the added space of the former Conservatory Restaurant, the club has gained a spacious feel, while the addition of a 12-foot-by-18-foot video screen, flanked by wire-mesh lighting towers, adds an aspect of fantasy.

This effect is heightened by the contrast between the black and gray basic decor and bold splashes of colored lights, which draw attention to some parts of the club while leaving others in semi-darkness.

According to Carver and head DJ Randy Z, the Nectarine Ballroom’s schedule for at least the first two weeks looks something like this:

■ Happy Hour (most likely in the bar located in the former Conservatory): starting at 4:30 p.m., no cover.

■ Cover: $5 per person each night for the first couple of weeks. Wednesdays will be Ladies Night (women admitted free.)

The big surprise this weekend (and a very nice surprise, at that) is a suddenly announced show Sunday night. The Gun Club will bring its latest four-piece incarnation to the Blind Pig.

Touring to support its latest album, the just-released “Las Vegas Story,” the group is getting rave reviews on the club circuit with a powerful, melodic style that blends Television, X and Blondie, with other qualities too specific to the group to categorize.

Opening the show will be Detroit’s Grease Factory, and tickets will be $5 at the door.

Pop Shop is a weekly column of news and observations on the local music scene.

The scene was complete with gawkers and chariots.
NEWS PHOTO • COLLEEN FITZGERALD