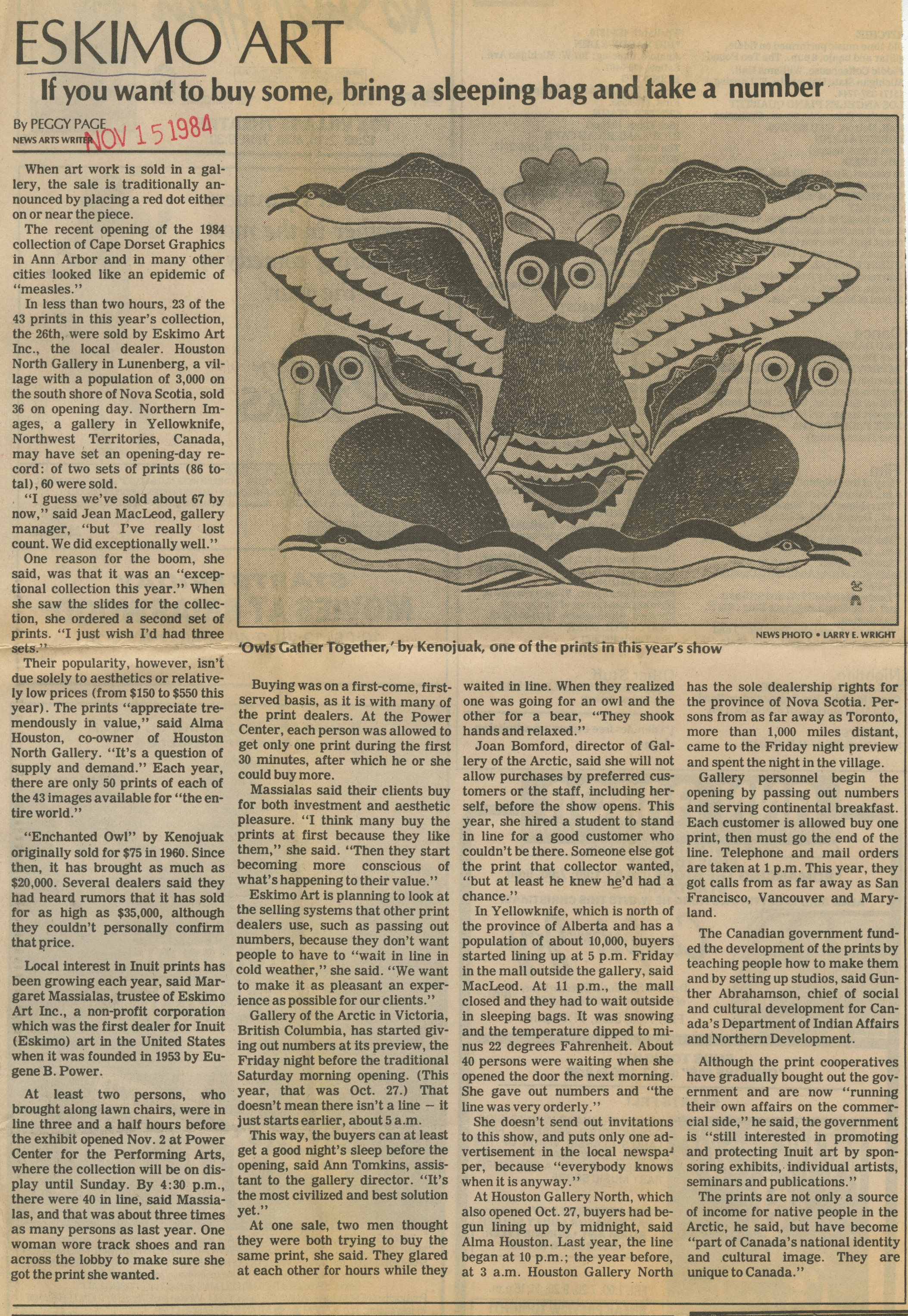 If you want to buy some, bring a sleeping bag and take a number

When art work is sold in a gallery, the sale is traditionally  announced by placing a red dot either on or near the piece.

The recent opening of the 1984 collection of Cape Dorset Graphics in Ann Arbor and in many other cities looked like an epidemic of "measles."

In less than two hours, 23 of the 43 prints in this year's collection, the 26th, were sold by Eskimo Art Inc., the local dealer. Houston North Gallery in Lunenberg, a village of 3,000 on the south short of Nova Scotia, sold 36 on opening day. Northern Images, a gallery in Yellowknife, Northwest Territories, Canada may have set an opening-day record: of two sets of prints (86 total), 60 were sold.

One reason for the boom, she said, was that it was an "exceptional collection this year." When she saw the slides for the collection, she ordered a second set of prints. "I just wish I'd had three sets."

Their popularity, however, isn't due solely aesthetics relatively low prices (from $150 to $550 this year). The prints "appreciate tremendously in value," said Alma Houston, co-owner of Houston North Gallery. "It's a question of supply and demand." Each year, there are only 50 prints of each of the 43 available for "the entire world."

"Enchanted Owl" by Kenojuak originally sold for $75 in 1960. Since then, it has brought as much as $20,000. Several dealers said they had heard rumors that it has sold for as high as $35,000, although they couldn't personally confirm that price.

Local interest in Inuit prints has been growing each year, said Margaret Massialas, trustee of Eskimo Art Inc., a non-profit corporation which was the first dealer for Inuit (Eskimo) art in the United States when it was founded in 1953 by Eugene B. Power.

At least two persons, who brought along lawn chairs, were in line three and a half hours before the exhibit opened Nov. 2 at Power Center for the Performing Arts, where the collection will be on display until Sunday. By 4:30 p.m., there were 40 in line, said Massialas, and that was about three times as many persons as last year. One woman wore track shoes and ran across the lobby to make sure she got the print she wanted.

Buying was on a first-come, first-served basis, as it is with many of the print dealers. At the Power Center, each person was allowed to get only one print during the first 30 minutes, after which he or she could buy more.

Massialas said their clients buy for both investment and aesthetic pleasure. "I think many buy the prints at first because they like them," she said. "Then they start becoming more conscious of what's happening to their value."

Eskimo Art is planning to look at the selling systems that other print dealers use, such as passing out numbers, because they don't want people to have to "wait in line in cold weather," she said. "We want to make it as pleasant an experience as possible for our clients."

Gallery of the Arctic in Victoria, British Colombia, has started giving out numbers at its preview, the Friday night before the traditional Saturday morning opening. (This year, that was Oct. 27.) That doesn't mean that there isn't a line-it just starts earlier, about 5 a.m.

This way, the buyers can at least get a good night's sleep before the opening, said Ann Tomkins, assistant to the gallery director. "It's the most civilized and best solution yet."

At one sale, two men thought they were both trying to buy the same print, she said. They glared at each other for hours while they waited in line. When they realized one was going for an owl and the other for a bear, "They shook hands and relaxed."

Joan Bomford, director of the gallery of the Arctic, said she will not allow purchases by preferred customers or the staff, including herself, before the show opens. This year, she hired a student to stand in line for a good customer who couldn't be there. Someone else got the print that collector wanted, "but at least he knew he'd had a chance."

In Yellowknife, which is north of the province in Alberta and has a population of about 10,000, buyers started lining up at 5 p.m. Friday in the mall outside the gallery, said MacLeod. At 11 p.m., the mall closed and they had to wait outside in sleeping bags. It was snowing and the temperature dipped to minus 22 degrees Fahrenheit. About 40 persons were waiting when she opened the door the next morning. She gave out numbers and "the line was very orderly."

She doesn't send out invitations to this show, and puts only one advertisement in the local newspaper, because "everybody know when it is anyway."

At Houston Gallery North, which also opened Oct. 27, buyers had begun lining up at midnight, said Alma Houston. Last year, the line began at 10 p.m., the year before, at 3 a.m. Houston Gallery North has the sole dealership rights for the province of Nova Scotia. Persons from as far as away as Toronto, more than 1000 miles distant, came to the Friday night preview and the spent the night in the village.

Gallery personnel begin the opening by passing out numbers and serving continental breakfast. Each customer is allowed to buy one print,  then must go to the end of the line. Telephone and mail orders are taken at 1 p.m. This year, they got calls from as far away as San Francisco, Vancouver and Maryland.

The Canadian government funded the development of the prints by teaching people how to make them and by setting up studios, said Gunther Abrahamson, chief of social and cultural development for Canada's Department of Indian Affairs and Northern development.

Although the print cooperatives have gradually bought out the government and are now "running their own affairs on the commercial side," he said, the government is "still interested in promoting and protecting Inuit art by sponsoring exhibits, individual artists, seminars, and publications."

The prints are not only a source of income for native people in the Arctic, he said, but have become "part of Canada's national identity and cultural image. They are unique to Canada."