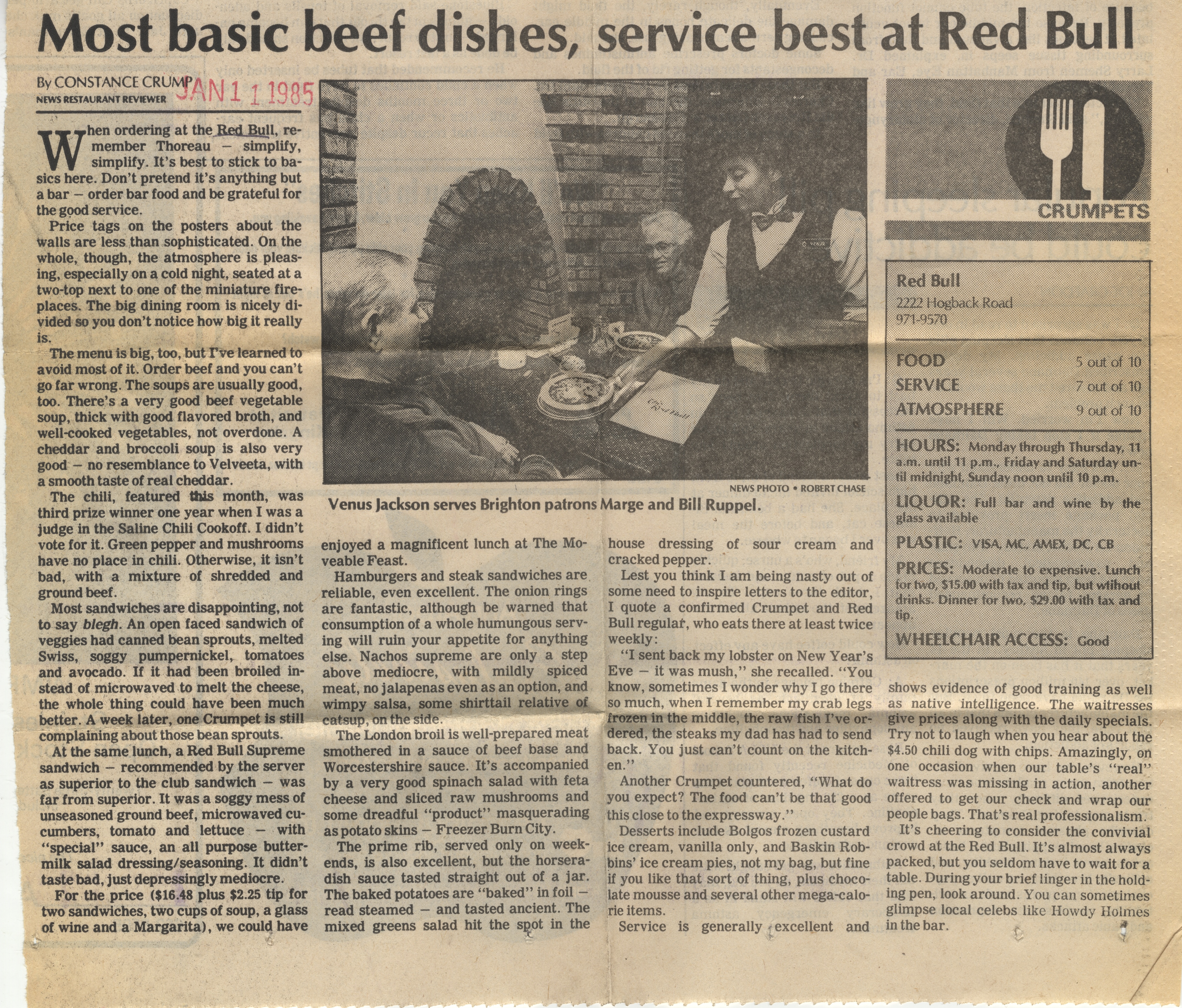 When ordering at the Red Bull, remember Thoreau - simplify, simplify. It’s best to stick to basics here. Don’t pretend it’s anything but a bar - order bar food and be grateful for the good service.

Price tags on the posters about the walls are less than sophisticated. On the whole, though, the atmosphere is pleasing, especially on a cold night, seated at a two-top next to one of the miniature fireplaces. The big dining room is nicely divided so you don’t notice how big it really is.

The menu is big, too, but I’ve learned to avoid most of it. Order beef and you can’t go far wrong. The soups are usually good, too. There’s a very good beef vegetable soup, thick with good flavored broth, and well-cooked vegetables, not overdone. A Cheddar and broccoli soup is also very good - no resemblance to Velveeta, with a smooth taste of real Cheddar.

The chili, featured this month, was third prize winner one year when I was a judge in the Saline Chili Cookoff. I didn’t vote for it. Green pepper and mushrooms have no place in chili. Otherwise, it isn’t bad, with a mixture of shredded and ground beef.

Most sandwiches are disappointing, not to say blegh. An open faced sandwich of veggies had canned bean sprouts, melted Swiss, soggy pumpernickel, tomatoes and avocado. If it had been broiled instead of microwaved to melt the cheese, the whole thing could have been much better. A week later, one Crumpet is still complaining about those bean sprouts.

At the same lunch, a Red Bull Supreme sandwich - recommended by the server as superior to the club sandwich - was far from superior. It was a soggy mess of unseasoned ground beef, microwaved cucumbers, tomato and lettuce - with “special” sauce, an all purpose buttermilk salad dressing/seasoning. It didn’t taste bad, just depressingly mediocre.

For the price ($16.48 plus $2.25 tip for two sandwiches, two cups of soup, a glass of wine and a Margarita), we could have﻿ enjoyed a magnificent lunch at The Moveable Feast.

Hamburgers and steak sandwiches are reliable, even excellent. The onion rings are fantastic, although be warned that consumption of a whole humungous serving will ruin your appetite for anything else. Nachos supreme are only a step above mediocre, with mildly spiced meat, no jalapenos even as an option, and wimpy salsa, some shirttail relative of catsup, on the side

The London broil is well-prepared meat smothered in a sauce of beef base and Worcestershire sauce. It’s accompanied by a very good spinach salad with feta cheese and sliced raw mushrooms and some dreadful “product” masquerading as potato skins - Freezer Bum City.

The prime rib, served only on weekends, is also excellent, but the horseradish sauce tasted straight out of a jar. The baked potatoes are “baked” in foil -read steamed - and tasted ancient. The mixed greens salad hit the spot in the house dressing of sour cream and cracked pepper.

Lest you think I am being nasty out of some need to inspire letters to the editor, I quote a confirmed Crumpet and Red Bull regular, who eats there at least twice weekly:

“I sent back my lobster on New Year’s Eve - it was mush,” she recalled. “You know, sometimes I wonder why I go there so much, when I remember my crab legs frozen in the middle, the raw fish I’ve ordered, the steaks my dad has had to send back. You just can’t count on the kitchen.”

Another Crumpet countered, “What do you expect? The food can’t be that good this close to the expressway.”

Desserts include Bolgos frozen custard ice cream, vanilla only, and Baskin Robbins’ ice cream pies, not my bag, but fine if you like that sort of thing, plus chocolate mousse and several other mega-calorie items.

Service is generally excellent and shows evidence of good training as well as native intelligence. The waitresses give prices along with the daily specials. Try not to laugh when you hear about the $4.50 chili dog with chips. Amazingly, on one occasion when our table’s “real” waitress was missing in action, another offered to get our check and wrap our people bags. That’s real professionalism.

It’s cheering to consider the convivial crowd at the Red Bull. It’s almost always packed, but you seldom have to wait for a table. During your brief linger in the holding pen, look around. You can sometimes glimpse local celebs like Howdy Holmes in the bar.

HOURS: Monday through Thursday, 11 a m. until 11 p.m., Friday and Saturday until midnight. Sunday noon until 10 p.m.

LIQUOR: Full bar and wine by the glass available