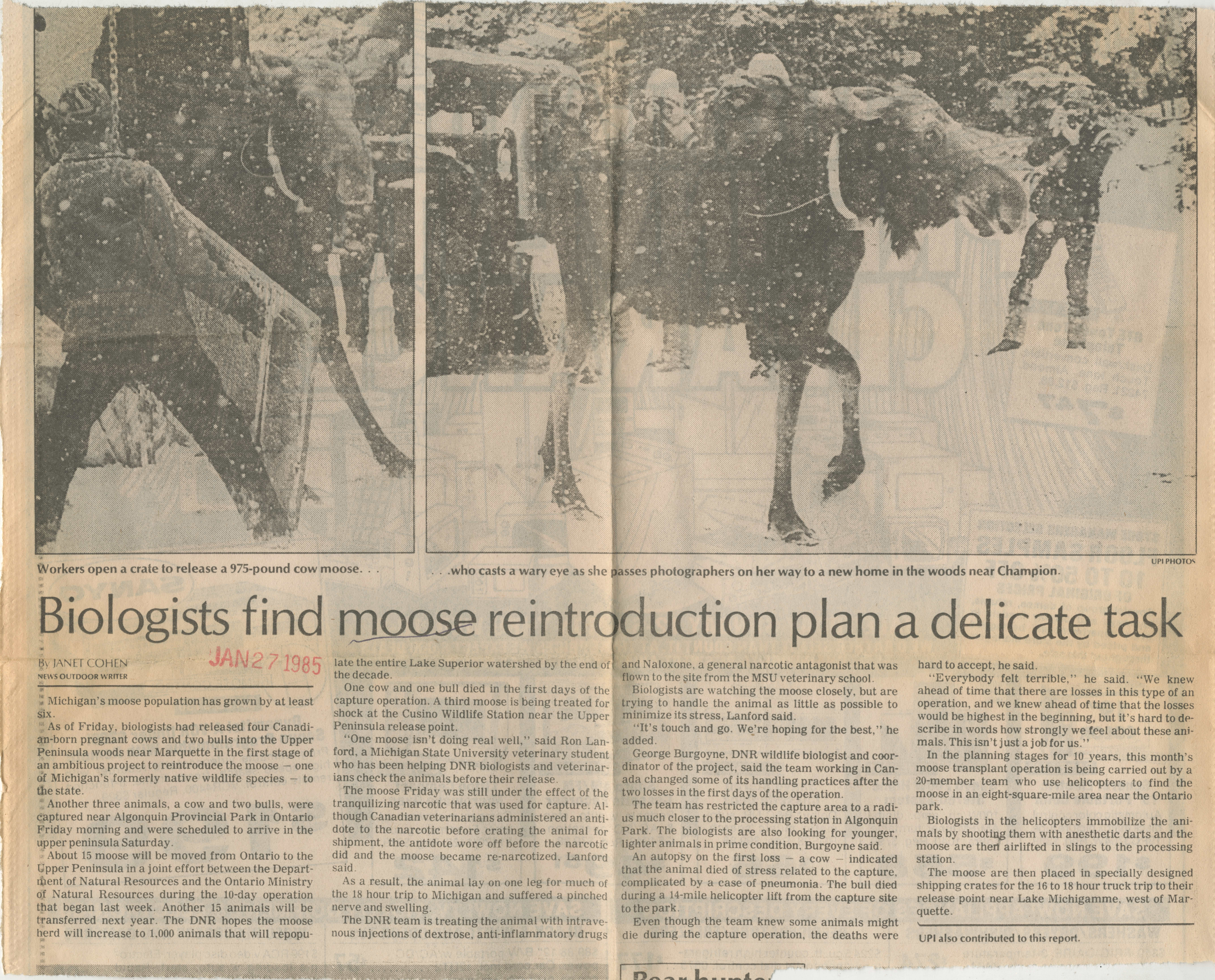 . . .who casts a wary eye as she passes photographers on her way to a new home in the woods near Champion

Michigan’s moose population has grown by at least six.

As of Friday, biologists had released four Canadian-born pregnant cows and two bulls into the Upper Peninsula woods near Marquette in the first stage of an ambitious project to reintroduce the moose — one of Michigan’s formerly native wildlife species — to the state.

Another three animals, a cow and two bulls, were captured near Algonquin Provincial Park in Ontario Friday morning and were scheduled to arrive in the upper peninsula Saturday.

About 15 moose will be moved from Ontario to the Upper Peninsula in a joint effort between the Department of Natural Resources and the Ontario Ministry of Natural Resources during the 10-day operation that began last week. Another 15 animals will be transferred next year. The DNR hopes the moose herd will increase to 1,000 animals that will repopulate the entire Lake Superior watershed by the end the decade.

One cow and one bull died in the first days of the capture operation. A third moose is being treated for shock at the Cusino Wildlife Station near the Upper Peninsula release point.

“One moose isn’t doing real well,” said Ron Lanford. a Michigan State University veterinary student who has been helping DNR biologists and veterinarians check the animals before their release.

The moose Friday was still under the effect of the tranquilizing narcotic that was used for capture. Although Canadian veterinarians administered an antidote to the narcotic before crating the animal for shipment, the antidote wore off before the narcotic did and the moose became re-narcotized, Lanford said.

As a result, the animal lay on one leg for much of the 18 hour trip to Michigan and suffered a pinched nerve and swelling.

The DNR team is treating the animal with intravenous injections of dextrose, anti-inflammatory drugs and Naloxone, a general narcotic antagonist that was flown to the site from the MSU veterinary school.

Biologists are watching the moose closely, but are trying to handle the animal as little as possible to minimize its stress, Lanford said.

“It’s touch and go. We’re hoping for the best,” he added.

George Burgoyne, DNR wildlife biologist and coordinator of the project, said the team working in Canada changed some of its handling practices after the two losses in the first days of the operation.

The team has restricted the capture area to a radius much closer to the processing station in Algonquin Park. The biologists are also looking for younger, lighter animals in prime condition, Burgoyne said.

An autopsy on the first loss — a cow — indicated that the animal died of stress related to the capture, complicated by a case of pneumonia. The bull died during a 14-mile helicopter lift from the capture site to the park.

Even though the team knew some animals might die during the capture operation, the deaths were hard to accept, he said.

In the planning stages for 10 years, this month's moose transplant operation is being carried out by a 20-member team who use helicopters to find the moose in an eight-square-mile area near the Ontario park.

Biologists in the helicopters immobilize the animals by shooting them with anesthetic darts and the moose are then airlifted in slings to the processing station.

The moose are then placed in specially designed shipping crates for the 16 to 18 hour truck trip to their release point near Lake Michigamme, west of Marquette.

UPI also contributed to this report.