'Peaceworks' Her injury healed, dancer Morse vows to make it this time 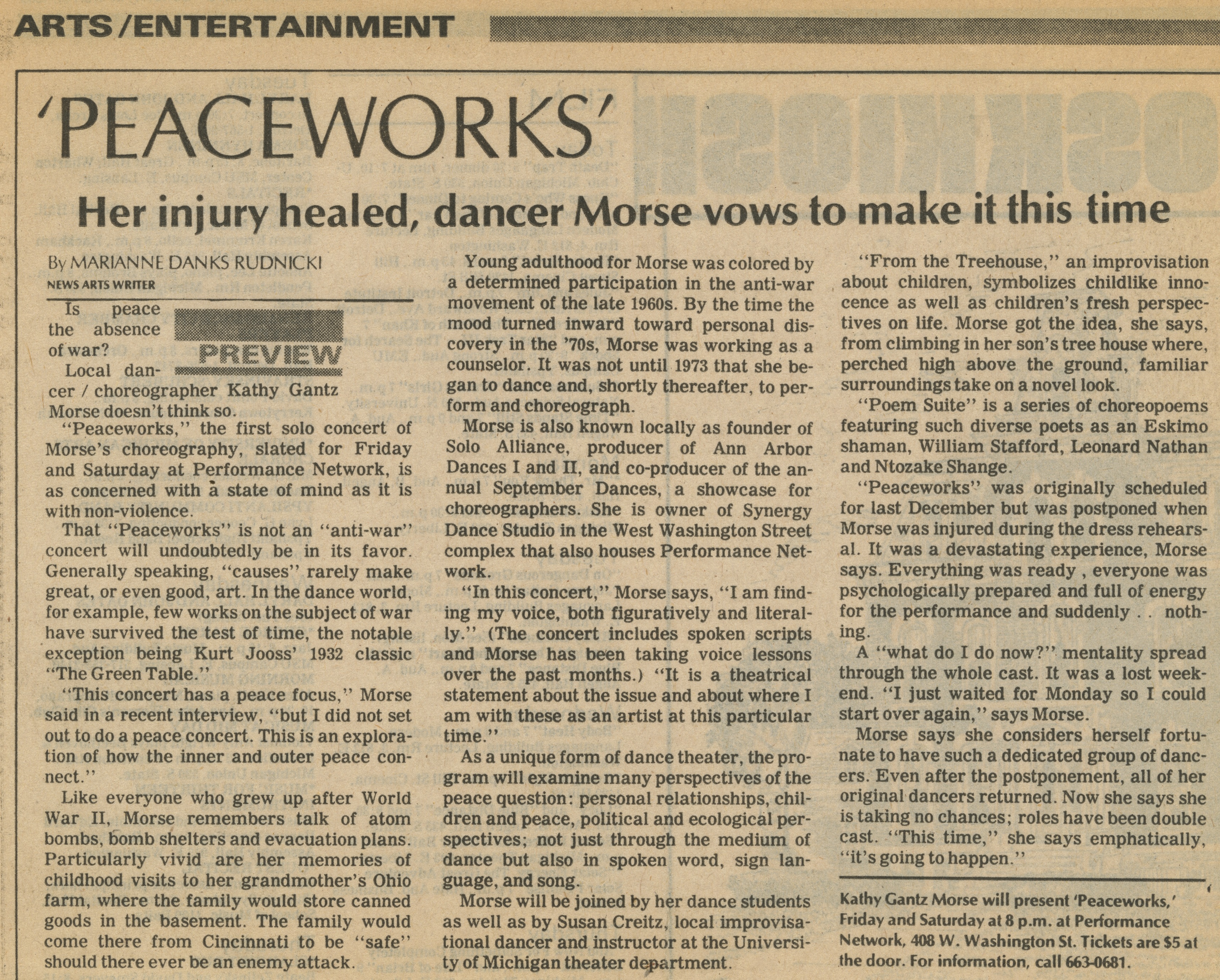 Her injury healed, dancer Morse vows to make it this time

Is peace the absence of war?

“Peaceworks," the first solo concert of Morse's choreography, slated for Friday and Saturday at Performance Network, is as concerned with a state of mind as it is with non-violence.

That “Peaceworks" is not an “anti-war” concert will undoubtedly be in its favor. Generally speaking, “causes” rarely make great, or even good, art. In the dance world, for example, few works on the subject of war have survived the test of time, the notable exception being Kurt Jooss’ 1932 classic “The Green Table."

"This concert has a peace focus," Morse said in a recent interview, “but I did not set out to do a peace concert. This is an exploration of how the inner and outer peace connect.”

Like everyone who grew up after World War II, Morse remembers talk of atom bombs, bomb shelters and evacuation plans. Particularly vivid are her memories of childhood visits to her grandmother’s Ohio farm, where the family would store canned goods in the basement. The family would come there from Cincinnati to be “safe” should there ever be an enemy attack.

Young adulthood for Morse was colored by a determined participation in the anti-war movement of the late 1960s. By the time the mood turned inward toward personal discovery in the ’70s, Morse was working as a counselor. It was not until 1973 that she began to dance and, shortly thereafter, to perform and choreograph.

Morse is also known locally as founder of Solo Alliance, producer of Ann Arbor Dances I and II, and co-producer of the annual September Dances, a showcase for choreographers. She is owner of Synergy Dance Studio in the West Washington Street complex that also houses Performance Network.

“In this concert,” Morse says, “I am finding my voice, both figuratively and literally.” (The concert includes spoken scripts and Morse has been taking voice lessons over the past months.) “It is a theatrical statement about the issue and about where I am with these as an artist at this particular time.”

As a unique form of dance theater, the program will examine many perspectives of the peace question: personal relationships, children and peace, political and ecological perspectives; not just through the medium of dance but also in spoken word, sign language, and song.

Morse will be joined by her dance students as well as by Susan Creitz, local improvisational dancer and instructor at the University of Michigan theater department.

“From the Treehouse,” an improvisation about children, symbolizes childlike innocence as well as children’s fresh perspectives on life. Morse got the idea, she says, from climbing in her son’s tree house where, perched high above the ground, familiar surroundings take on a novel look.

“Poem Suite” is a series of choreopoems featuring such diverse poets as an Eskimo shaman, William Stafford, Leonard Nathan and Ntozake Shange.

“Peaceworks” was originally scheduled for last December but was postponed when Morse was injured during the dress rehearsal. It was a devastating experience, Morse says. Everything was ready, everyone was psychologically prepared and full of energy for the performance and suddenly . . nothing.

A “what do I do now?” mentality spread through the whole cast. It was a lost weekend. “I just waited for Monday so I could start over again,” says Morse.

Morse says she considers herself fortunate to have such a dedicated group of dancers. Even after the postponement, all of her original dancers returned. Now she says she is taking no chances; roles have been double cast. “This time,” she says emphatically, “it’s going to happen.’ ’

Kathy Gantz Morse will present 'Peaceworks,' Friday and Saturday at 8 p.m. at Performance Network, 408 W. Washington St. Tickets are $5 at the door. For information, call 663-0681.