The Selling Of The Michigan 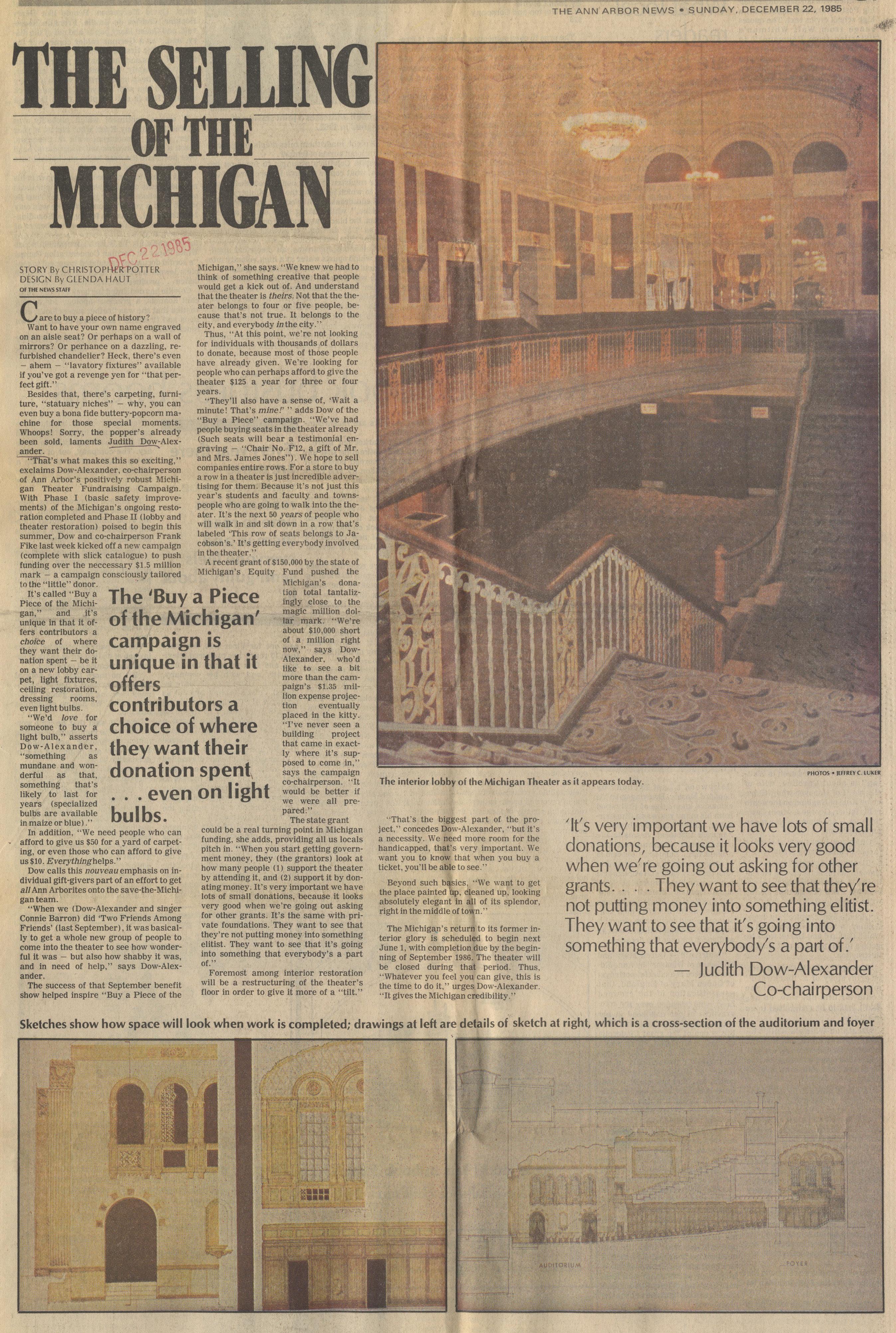 The Selling of the Michigan

of the news staff

Care to buy a piece of history?

Want to have your own name engraved on an aisle seat? Or perhaps on a wall of mirrors? Or perhance on a dazzling, refurbished chandelier? Heck, there's even - ahem- "lavatory fixtures" available if you've got a revenge yen for "that perfect gift."

Besides that, there's carpeting, furniture, "statuary niches" - why, you can even buy a bona fide buttery-popcorn machine for those special moments. Whoops! Sorry, the popper's already been sold, laments Judith Dow-Alexander.

It's called "Buy a Piece of the Michigan," and its unique in that it offers contributors a choice of where they want their doation spent - be it on a new lobby carpet, light fixtures, ceiling restoration, dressing rooms, even light bulbs.

"We'd love for someone to buy a light bulb," asserts Dow-Alexander, "something as mundane and wonderful as that, something that's likely to last for years (specialized bulbs are available in maize or blue)."

Dow calls this nouveau emphasis on individual gift-givers part of an effort to get all Ann Arborites onto the save-the-Michigan team.

"When we (Dow-Alexander and singer Connie Barron) did 'Two Friends Among Friends' (last September), it was basically to get a whole new group of people to come into the theater to see how wonderful it was - but also how shabby it was, and in need of help," says Dow-Alexander.

The success of that September benefit show helped inspire "Buy a Piece of the Michigan," she says. "We knew we had to think of something creative that people would get a kick out of. And understand that the theater is theirs. Not that the theater belongs to four or five people, because that's not true. It belongs to the city, and everybody in the city."

This, "At this point, we're not looking for individuals with thousands of dollars to donate, because most of those people have already given. We're looking for people who can perhaps afford to give the theater $125 a year for three or four years.

"They'll also have a sense of, 'Wait a minute! That's mine!' " adds Dow of the "Buy a Piece" campaign. "We've had people buying seats in the theater already (Such seats will bear a testimonial engraving - "Chair No. F12, a gift of Mr. and Mrs. James Jones"). We hope to sell companies entire rows. For a store to buy a row in a theater is just incredible advertising for them. Because it's not just this year's students and faculty an townspeople who are going to walk into the theater. It's the next 50 years of people who will walk in and sit down in a row that's labeled 'This row of seats belongs to Jacobson's.' It's getting everybody involved in the theater."

A recent grant of $150,000 by the state of Michigan's Equity Fund pushed the Michigan's donation total tantalizingly close to the magic million dollar mark. "We're about $10,000 short of a million right now," says Dow-Alexander, who'd like to see a bit more than the campaign's $1.25 million expense projection eventually placed in the kitty. "I've never seen a building project that came in exactly where it's supposed to come in," says the campaign co-chairperson. "It would be better if we were all prepared."

The state grant could be a real turning point in Michigan funding, she adds, providing all us locals pitch in. "When you start getting government money, they (the grantors) look at how many people (1), support the theater by attending it, and (2) support it by donating money. It's very important we have lots of small donations, because it looks very good when we're going out asking for other grants. It's the same with private foundations. They want to see that they're not putting money into something elitist. They want to see that it's going into something that everybody's a part of."

Foremost among interior restoration will be a restructuring of the theater's floor in order to give it more of a "tilt."

"That's the biggest part of the project," concedes Dow-Alexander, "but it's a necessity. We need more room for the handicapped, that's very important. We want you to know that when you buy a ticket, you'll be able to see."

Beyond such basics, "We want to get the place painted up, cleaned up, looking absolutely elegant in all of its splendor, right in the middle of town."

The Michigan's return to its former interior glory is scheduled to begin next June 1, with completion due by the beginning of September 1986. The theater will be closed during that period. Thus "Whatever you feel you can give, this is the time to do it," urges Dow-Alexander. "It gives the Michigan credibility."

The 'Buy a piece of the Michigan' campaign is unique in that it offers contributors a choice of where they want their donation spent ... even on light bulbs.

The interior lobby of the Michigan Theater as it appears today.

Sketches show how space will look when work is completed; drawings at left are details of sketch at right, which is a cross-section of the auditorium and foyer.