Nobody loves Joe Orton except for, um, the, uh... 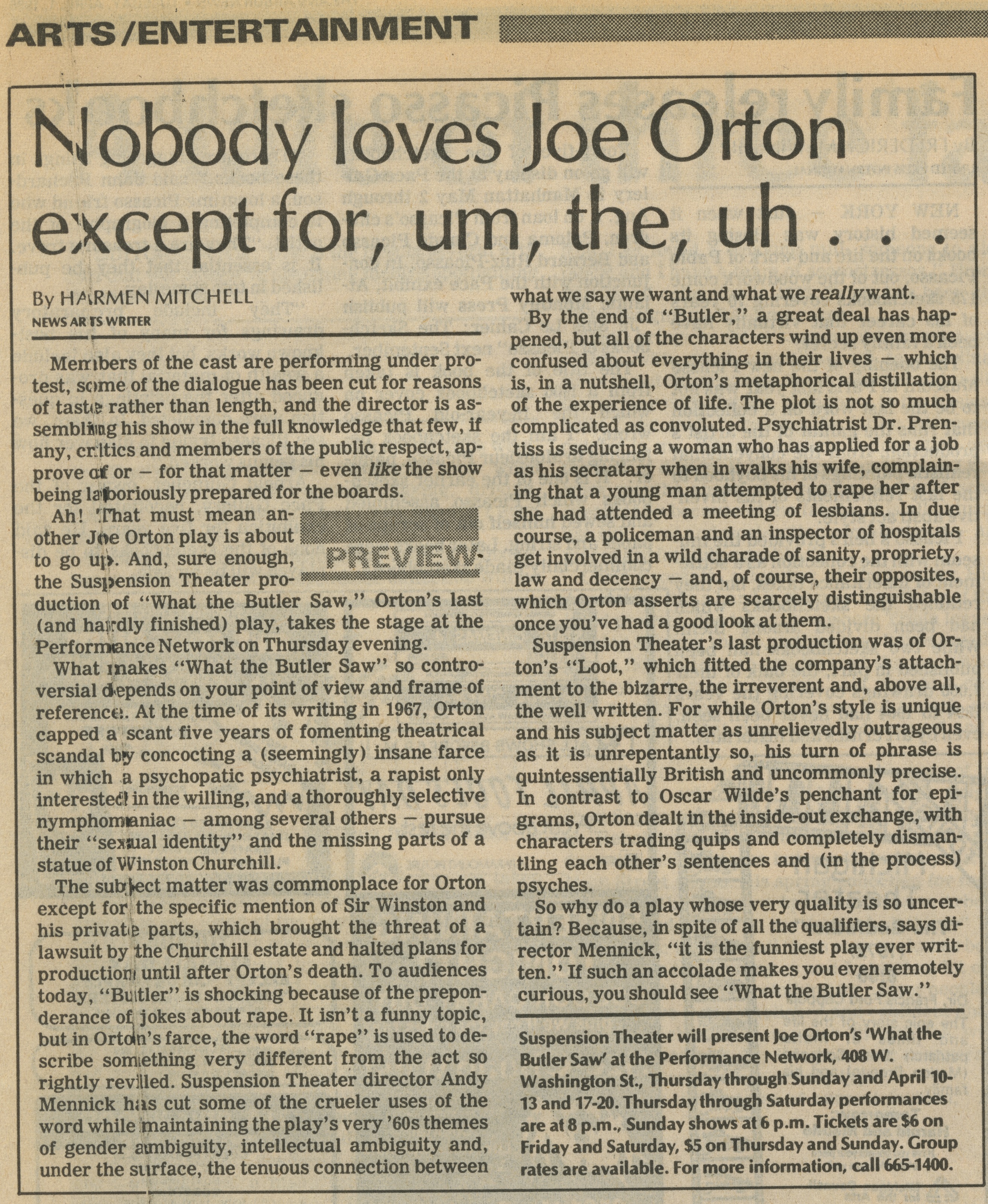 Members of the cast are performing under protest, some of the dialogue has been cut for reasons of taste rather than length, and the director is assembling his show in the full knowledge that few, if any, critics and members of the public respect, approve of or — for that matter — even like the show being laboriously prepared for the boards.

Ah! zthat must mean another Joe Orton play Is about to go up. And, sure enough, the Suspension Theater production of “What the Butler Saw,” Orton’s last (and hardly finished) play, takes the stage at the Performance Network on Thursday evening.

What makes “What the Butler Saw” so controversial depends on your point of view and frame of reference. At the time of its writing in 1967, Orton capped a scant five years of fomenting theatrical scandal by concocting a (seemingly) insane farce in which a psychopathic psychiatrist, a rapist only interested in the willing, and a thoroughly selective nymphomaniac - among several others - pursue their “sexual identity” and the missing parts of a statue of Winston Churchill.

The subject matter was commonplace for Orton except for the specific mention of Sir Winston and his private parts, which brought the threat of a lawsuit by the Churchill estate and halted plans for production until after Orton’s death. To audiences today, “Butler” is shocking because of the preponderance of jokes about rape. It isn’t a funny topic, but in Ortoln’s farce, the word “rape” is used to describe something very different from the act so rightly reviled. Suspension Theater director Andy Mennick has cut some of the crueler uses of the word while maintaining the play’s very ’60s themes of gender ambiguity, intellectual ambiguity and, under the surface, the tenuous connection between what we say we want and what we really want.

By the end of “Butler,” a great deal has happened, but all of the characters wind up even more confused about everything in their lives - which is, in a nutshell, Orton’s metaphorical distillation of the experience of life. The plot is not so much complicated as convoluted. Psychiatrist Dr. Prentiss is seducing a woman who has applied for a job as his secretary when in walks his wife, complaining that a young man attempted to rape her after she had attended a meeting of lesbians. In due course, a policeman and an inspector of hospitals get involved in a wild charade of sanity, propriety, law and decency - and, of course, their opposites, which Orton asserts are scarcely distinguishable once you’ve had a good look at them.

Suspension Theater’s last production was of Orton’s “Loot,” which fitted the company’s attachment to the bizarre, the irreverent and, above all, the well written. For while Orton’s style is unique and his subject matter as unrelievedly outrageous as it is unrepentantly so, his turn of phrase is quintessentially British and uncommonly precise. In contrast to Oscar Wilde’s penchant for epigrams, Orton dealt in the inside-out exchange, with characters trading quips and completely dismantling each other’s sentences and (in the process) psyches.

So why do a play whose very quality is so uncertain? Because, in spite of all the qualifiers, says director Mennick, “it is the funniest play ever written.” If such an accolade makes you even remotely curious, you should see “What the Butler Saw.”

Suspension Theater will present Joe Orton's 'What the Butler Saw' at the Performance Network, 408 W. Washington St., Thursday through Sunday and April 10-13 and 17-20. Thursday through Saturday performances are at 8 p.m., Sunday shows at 6 p.m. Tickets are $6 on Friday and Saturday, $5 on Thursday and Sunday. Group rates are available. For more information, call 665-1400.