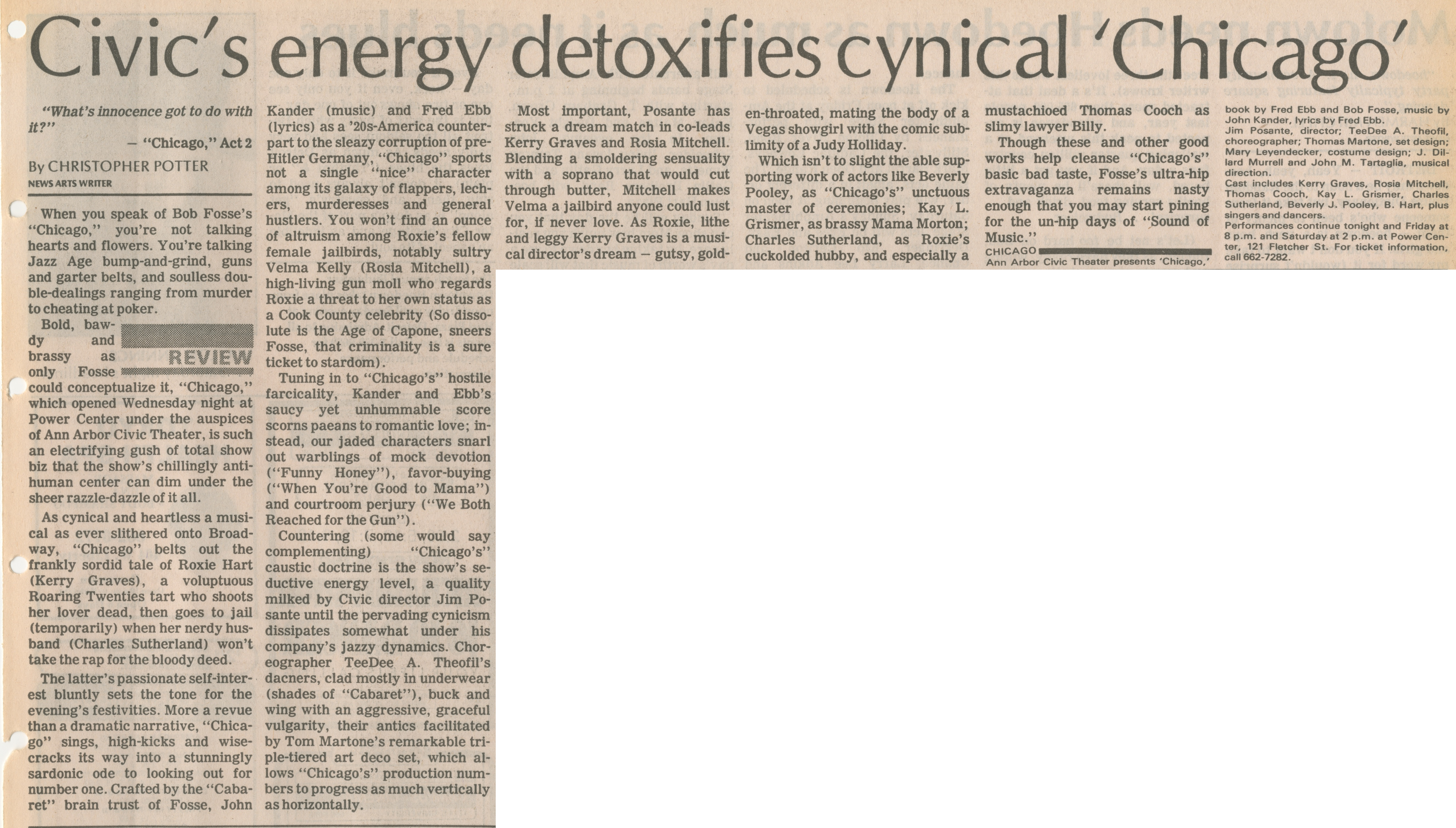 "What's innocence got to do with it?"

When you speak of Bob Fosse’s “Chicago,” you’re not talking hearts and flowers. You’re talking Jazz Age bump-and-grind, guns and garter belts, and soulless double-dealings ranging from murder to cheating at poker.

Bold, bawdy and brassy as only Fosse could conceptualize it, “Chicago,” which opened Wednesday night at Power Center under the auspices of Ann Arbor Civic Theater, is such an electrifying gush of total show biz that the show’s chillingly antihuman center can dim under the sheer razzle-dazzle of it all.

As cynical and heartless a musical as ever slithered onto Broadway, “Chicago” belts out the frankly sordid tale of Roxie Hart (Kerry Graves), a voluptuous Roaring Twenties tart who shoots her lover dead, then goes to jail (temporarily) when her nerdy husband (Charles Sutherland) won’t take the rap for the bloody deed.

The latter’s passionate self-interest bluntly sets the tone for the evening’s festivities. More a revue than a dramatic narrative, “Chicago” sings, high-kicks and wisecracks its way into a stunningly sardonic ode to looking out for number one. Crafted by the “Cabaret” brain trust of Fosse, John Kander (music) and Fred Ebb (lyrics) as a ’20s-America counterpart to the sleazy corruption of pre-Hitler Germany, “Chicago” sports not a single “nice” character among its galaxy of flappers, lechers, murderesses and general hustlers. You won’t find an ounce of altruism among Roxie’s fellow female jailbirds, notably sultry Velma Kelly (Rosia Mitchell), a high-living gun moll who regards Roxie a threat to her own status as a Cook County celebrity (So dissolute is the Age of Capone, sneers Fosse, that criminality is a sure ticket to stardom).

Tuning in to “Chicago’s” hostile farcicality, Kander and Ebb’s saucy yet unhummable score scorns paeans to romantic love; instead, our jaded characters snarl out warblings of mock devotion (“Funny Honey”), favor-buying (“When You’re Good to Mama”) and courtroom perjury (“We Both Reached for the Gun”).

Countering (some would say complementing) “Chicago’s” caustic doctrine is the show’s seductive energy level, a quality milked by Civic director Jim Posante until the pervading cynicism dissipates somewhat under his company’s jazzy dynamics. Choreographer TeeDee A. Theofil’s dancers, clad mostly in underwear (shades of “Cabaret”), buck and wing with an aggressive, graceful vulgarity, their antics facilitated by Tom Martone’s remarkable triple-tiered art deco set, which allows “Chicago’s” production numbers to progress as much vertically as horizontally.

Most important, Posante has struck a dream match in co-leads Kerry Graves and Rosia Mitchell. Blending a smoldering sensuality with a soprano that would cut through butter, Mitchell makes Velma a jailbird anyone could lust for, if never love. As Roxie, lithe and leggy Kerry Graves is a musical director’s dream - gutsy, golden-throated, mating the body of a Vegas showgirl with the comic sublimity of a Judy Holliday.

Though these and other good works help cleanse “Chicago’s” basic bad taste, Fosse’s ultra-hip extravaganza remains nasty enough that you may start pining for the un-hip days of “Sound of Music.”