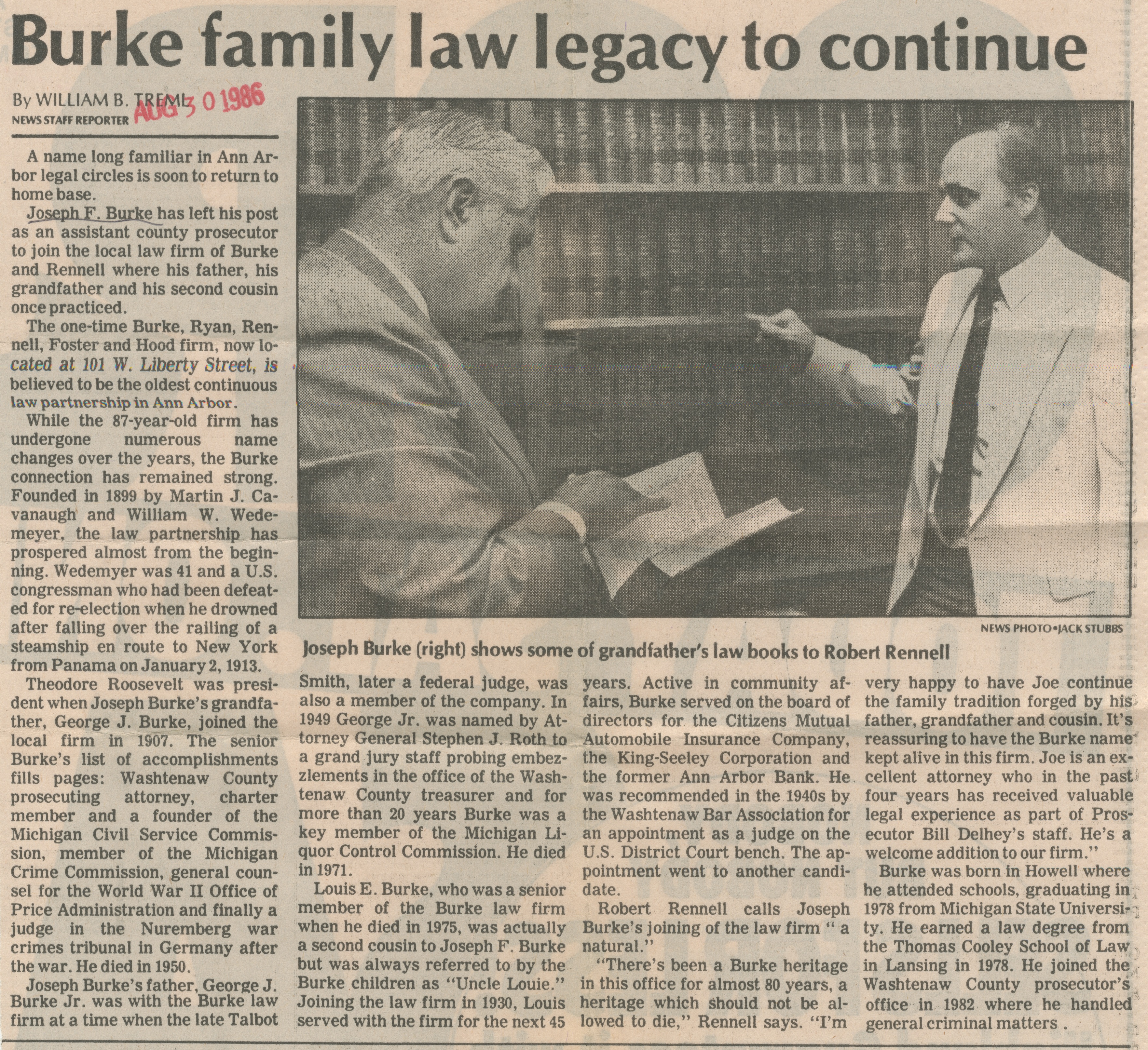 A name long familiar in Ann Arbor legal circles is soon to return to home base.

Joseph F. Burke has left his post as an assistant county prosecutor to join the local law firm of Burke and Rennell where his father, his grandfather and his second cousin once practiced.

While the 87-year-old firm has undergone numerous name changes over the years, the Burke connection has remained strong. Founded in 1899 by Martin J. Cavanaugh and William W. Wedemeyer, the law partnership has prospered almost from the beginning. Wedemyer was 41 and a U.S. congressman who had been defeated for re-election when he drowned after falling over the railing of a steamship en route to New York from Panama on January 2,1913.

Theodore Roosevelt was president when Joseph Burke’s grandfather, George J. Burke, joined the local firm in 1907. The senior Burke’s list of accomplishments fills pages: Washtenaw County prosecuting attorney, charter member and a founder of the Michigan Civil Service Commission, member of the Michigan Crime Commission, general counsel for the World War II Office of Price Administration and finally a judge in the Nuremberg war crimes tribunal in Germany after the war. He died in 1950.

Joseph Burke’s father, George J. Burke Jr. was with the Burke law firm at a time when the late Talbot Smith, later a federal judge, was also a member of the company. In 1949 George Jr. was named by Attorney General Stephen J. Roth to a grand jury staff probing embezzlements in the office of the Washtenaw County treasurer and for more than 20 years Burke was a key member of the Michigan Liquor Control Commission. He died in 1971.

Louis E. Burke, who was a senior member of the Burke law firm when he died in 1975, was actually a second cousin to Joseph F. Burke but was always referred to by the Burke children as “Uncle Louie.” Joining the law firm in 1930, Louis served with the firm for the next 45 years. Active in community affairs, Burke served on the board of directors for the Citizens Mutual Automobile Insurance Company, the King-Seeley Corporation and the former Ann Arbor Bank. He was recommended in the 1940s by the Washtenaw Bar Association for an appointment as a judge on the U.S. District Court bench. The appointment went to another candidate.

“There’s been a Burke heritage in this office for almost 80 years, a heritage which should not be allowed to die,” Rennell says. “I’m very happy to have Joe continue the family tradition forged by his father, grandfather and cousin. It’s reassuring to have the Burke name kept alive in this firm. Joe is an excellent attorney who in the past four years has received valuable legal experience as part of Prosecutor Bill Delhey’s staff. He’s a welcome addition to our firm.”

Burke was born in Howell where he attended schools, graduating in 1978 from Michigan State University. He earned a law degree from the Thomas Cooley School of Law in Lansing in 1978. He joined the Washtenaw County prosecutor’s office in 1982 where he handled general criminal matters.