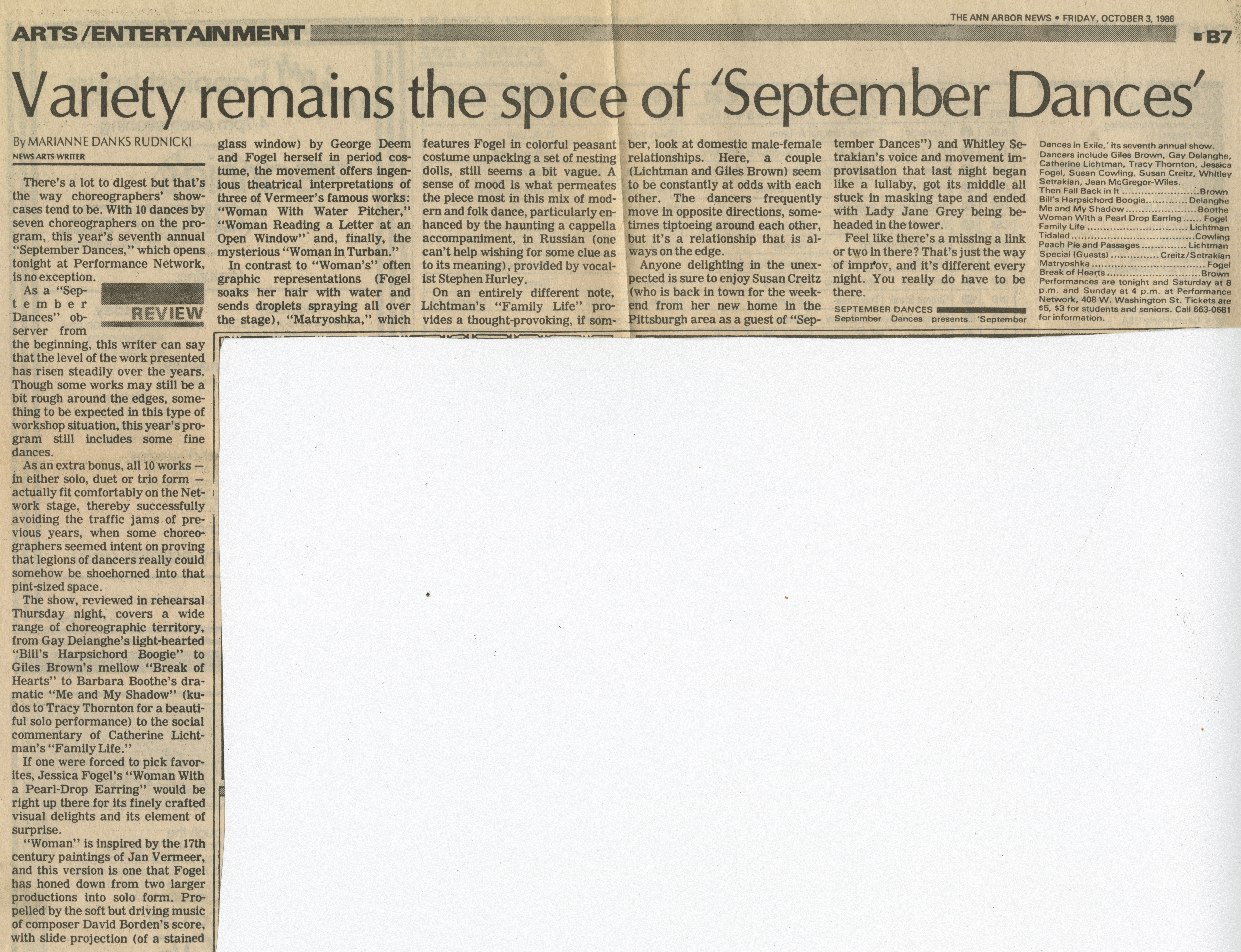 There’s a lot to digest but that’s the way choreographers’ showcases tend to be. With 10 dances by seven choreographers on the program, this year’s seventh annual “September Dances,” which opens tonight at Performance Network, is no exception.

As a “September Dances” observer from the beginning, this writer can say that the level of the work presented has risen steadily over the years. Though some works may still be a bit rough around the edges, something to be expected in this type of workshop situation, this year’s program still includes some fine dances.

As an extra bonus, all 10 works - in either solo, duet or trio form - actually fit comfortably on the Network stage, thereby successfully avoiding the traffic jams of previous years, when some choreographers seemed intent on proving that legions of dancers really could somehow be shoehorned into that pint-sized space.

The show, reviewed in rehearsal Thursday night, covers a wide range of choreographic territory, from Gay Delanghe’s light-hearted “Bill’s Harpsichord Boogie” to Giles Brown’s mellow “Break of Hearts” to Barbara Boothe’s dramatic “Me and My Shadow” (kudos to Tracy Thornton for a beautiful solo performance) to the social commentary of Catherine Lichtman’s “Family Life.”

If one were forced to pick favorites, Jessica Fogel’s “Woman With a Pearl-Drop Earring” would be right up there for its finely crafted visual delights and its element of surprise.

“Woman" is inspired by the 17th century paintings of Jan Vermeer, and this version is one that Fogel has honed down from two larger productions into solo form. Propelled by the soft but driving music of composer David Borden’s score, with slide projection (of a stained glass window) by George Deem and Fogel herself in period costume, the movement offers ingenious theatrical interpretations of three of Vermeer’s famous works: “Woman With Water Pitcher,” “Woman Reading a Letter at an Open Window”' and, finally, the mysterious “Woman in Turban.”

In contrast to “Woman’s” often graphic representations (Fogel soaks her hair with water and sends droplets spraying all over the stage), “Matryoshka,” which features Fogel in colorful peasant costume unpacking a set of nesting dolls, still seems a bit vague. A sense of mood is what permeates the piece most in this mix of modern and folk dance, particularly enhanced by the haunting a cappella accompaniment, in Russian (one can't help wishing for some clue as to its meaning), provided by vocalist Stephen Hurley.

On an entirely different note, Lichtman's "Family Life" provides a thought-provoking, if somber, look at domestic male-female relationships. Here, a couple (Lichtman and Giles Brown) seem to be constantly at odds with each other. The dancers frequently move in opposite directions, sometimes tiptoeing around each other, but it's a relationship that is always on the edge.

Anyone delighting in the unexpected is sure to enjoy Susan Creitz (who is back in town for the weekend from her new home in the Pittsburgh area as a guest of "September Dances") and Whitley Setrakian's voice and movement improvisation that last night began like a lullaby, got its middle all stuck in masking tape and ended with Lady Jane Grey being beheaded in the tower.

Feel like there’s a missing a link or two in there? That’s just the way of improv, and it’s different every night. You really do have to be there.

Then Fall Back in It - Brown

Me and My Shadow - Boothe