Devil's Night Passes Quietly For Most Of County 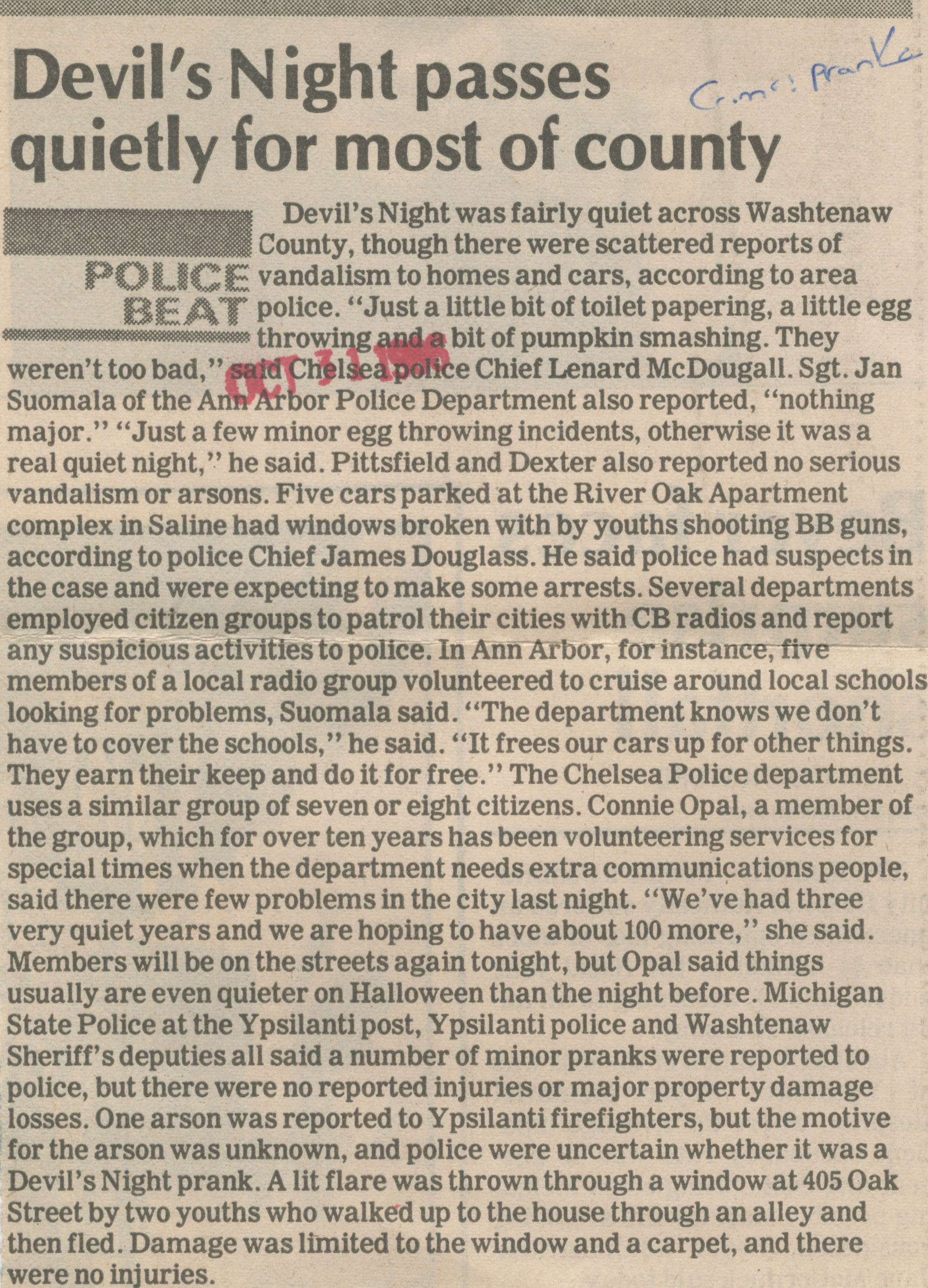 Devil's Night passes compro quietly for most of county
Devil's Night was fairly quiet across Washtenaw
County, though there were scattered reports of POUC vandalism to homes and cars, according to area BEAT police. “Just a little bit of toilet papering, a little egg
SARDERICODS throwing and a bit of pumpkin smashing. They weren't too bad,” said Chelsea police Chief Lenard McDougall. Sgt. Jan Suomala of the Ann Arbor Police Department also reported, "nothing major.” “Just a few minor egg throwing incidents, otherwise it was a real quiet night," he said. Pittsfield and Dexter also reported no serious vandalism or arsons. Five cars parked at the River Oak Apartment complex in Saline had windows broken with by youths shooting BB guns, according to police Chief James Douglass. He said police had suspects in the case and were expecting to make some arrests. Several departments employed citizen groups to patrol their cities with CB radios and report any suspicious activities to police. In Ann Arbor, for instance, five members of a local radio group volunteered to cruise around local schools looking for problems, Suomala said. “The department knows we don't have to cover the schools," he said. "It frees our cars up for other things. They earn their keep and do it for free.” The Chelsea Police department uses a similar group of seven or eight citizens. Connie Opal, a member of the group, which for over ten years has been volunteering services for special times when the department needs extra communications people, said there were few problems in the city last night. "We've had three very quiet years and we are hoping to have about 100 more," she said. Members will be on the streets again tonight, but Opal said things usually are even quieter on Halloween than the night before. Michigan State Police at the Ypsilanti post, Ypsilanti police and Washtenaw Sheriff's deputies all said a number of minor pranks were reported to police, but there were no reported injuries or major property damage losses. One arson was reported to Ypsilanti firefighters, but the motive for the arson was unknown, and police were uncertain whether it was a Devil's Night prank. A lit flare was thrown through a window at 405 Oak Street by two youths who walked up to the house through an alley and then fled. Damage was limited to the window and a carpet, and there were no injuries.