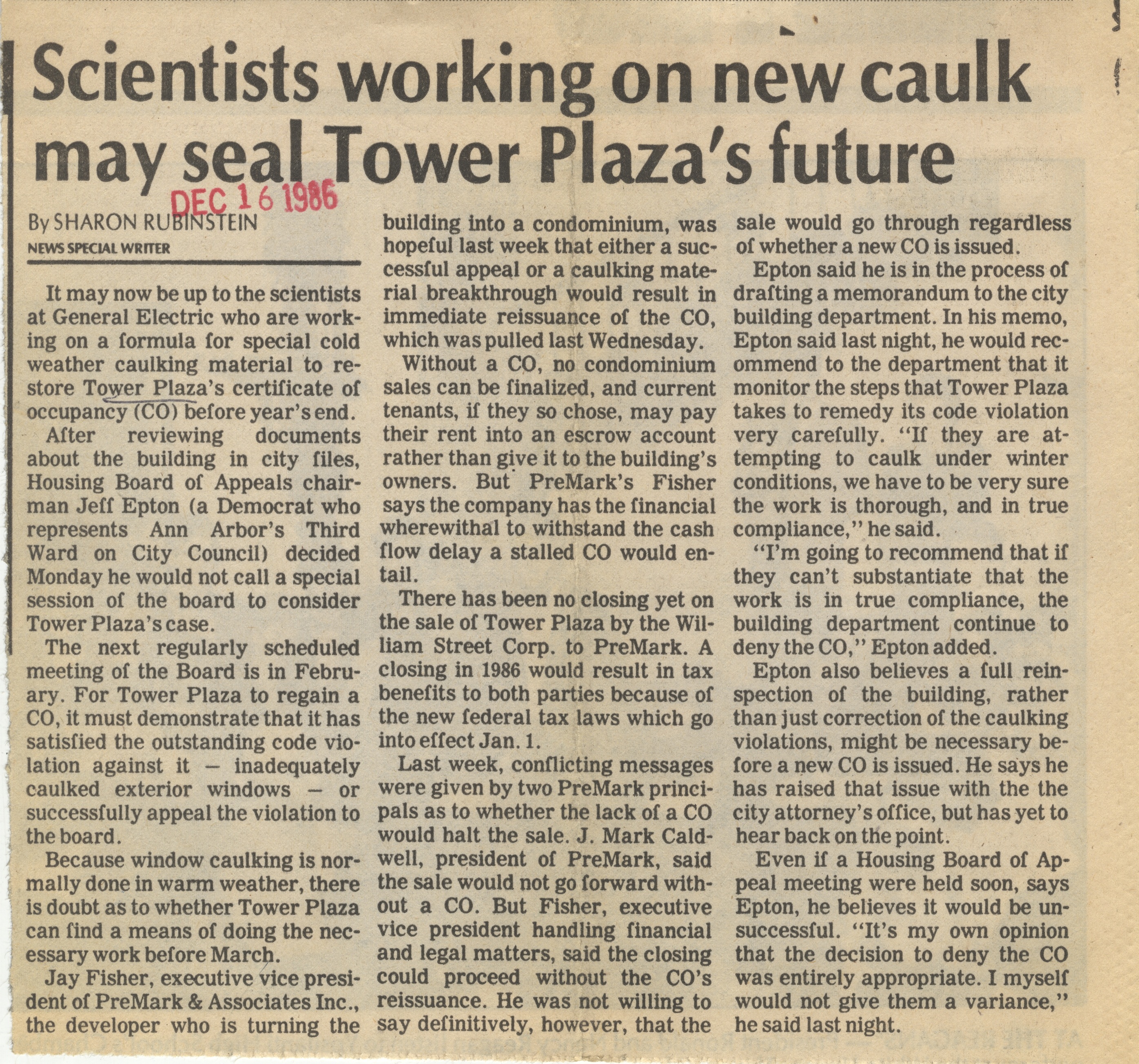 It may now be up to the scientists at General Electric who are working on a formula for special cold weather caulking material to restore Toyer Plaza’s certificate of occupancy (CO) before year’s end.

After reviewing documents about the building in city files, Housing Board of Appeals chairman Jeff Epton (a Democrat who represents Ann Arbor’s Third Ward on City Council) decided Monday he would not call a special session of the board to consider Tower Plaza’s case.

The next regularly scheduled meeting of the Board is in February. For Tower Plaza to regain a CO, it must demonstrate that it has satisfied the outstanding code violation against it — inadequately caulked exterior windows - or successfully appeal the violation to the board.

Because window caulking is normally done in warm weather, there is doubt as to whether Tower Plaza can find a means of doing the necessary work before March.

Jay Fisher, executive vice president of PreMark & Associates Inc., the developer who is turning the building into a condominium, was hopeful last week that either a successful appeal or a caulking material breakthrough would result in immediate reissuance of the CO, which was pulled last Wednesday.

Without a CO, no condominium sales can be finalized, and current tenants, if they so chose, may pay their rent into an escrow account rather than give it to the building’s owners. But PreMark’s Fisher says the company has the financial wherewithal to withstand the cash flow delay a stalled CO would entail.

There has been no closing yet on the sale of Tower Plaza by the William Street Corp. to PreMark. A closing in 1986 would result in tax benefits to both parties because of the new federal tax laws which go into effect Jan. 1.

Last week, conflicting messages were given by two PreMark principals as to whether the lack of a CO would halt the sale. J. Mark Caldwell, president of PreMark, said the sale would not go forward without a CO. But Fisher, executive vice president handling financial and legal matters, said the closing could proceed without the CO’s reissuance. He was not willing to say definitively, however, that the sale would go through regardless of whether a new CO is issued.

Epton said he is in the process of drafting a memorandum to the city building department. In his memo, Epton said last night, he would recommend to the department that it monitor the steps that Tower Plaza takes to remedy its code violation very carefully. “If they are attempting to caulk under winter conditions, we have to be very sure the work is thorough, and in true compliance,” he said.

“I’m going to recommend that if they can’t substantiate that the work is in true compliance, the building department continue to deny the CO,” Epton added.

Epton also believes a full reinspection of the building, rather than just correction of the caulking violations, might be necessary before a new CO is issued. He says he has raised that issue with the the city attorney’s office, but has yet to hear back on the point.

Even if a Housing Board of Appeal meeting were held soon, says Epton, he believes it would be unsuccessful. “It’s my own opinion that the decision to deny the CO was entirely appropriate. I myself would not give them a variance,” he said last night.