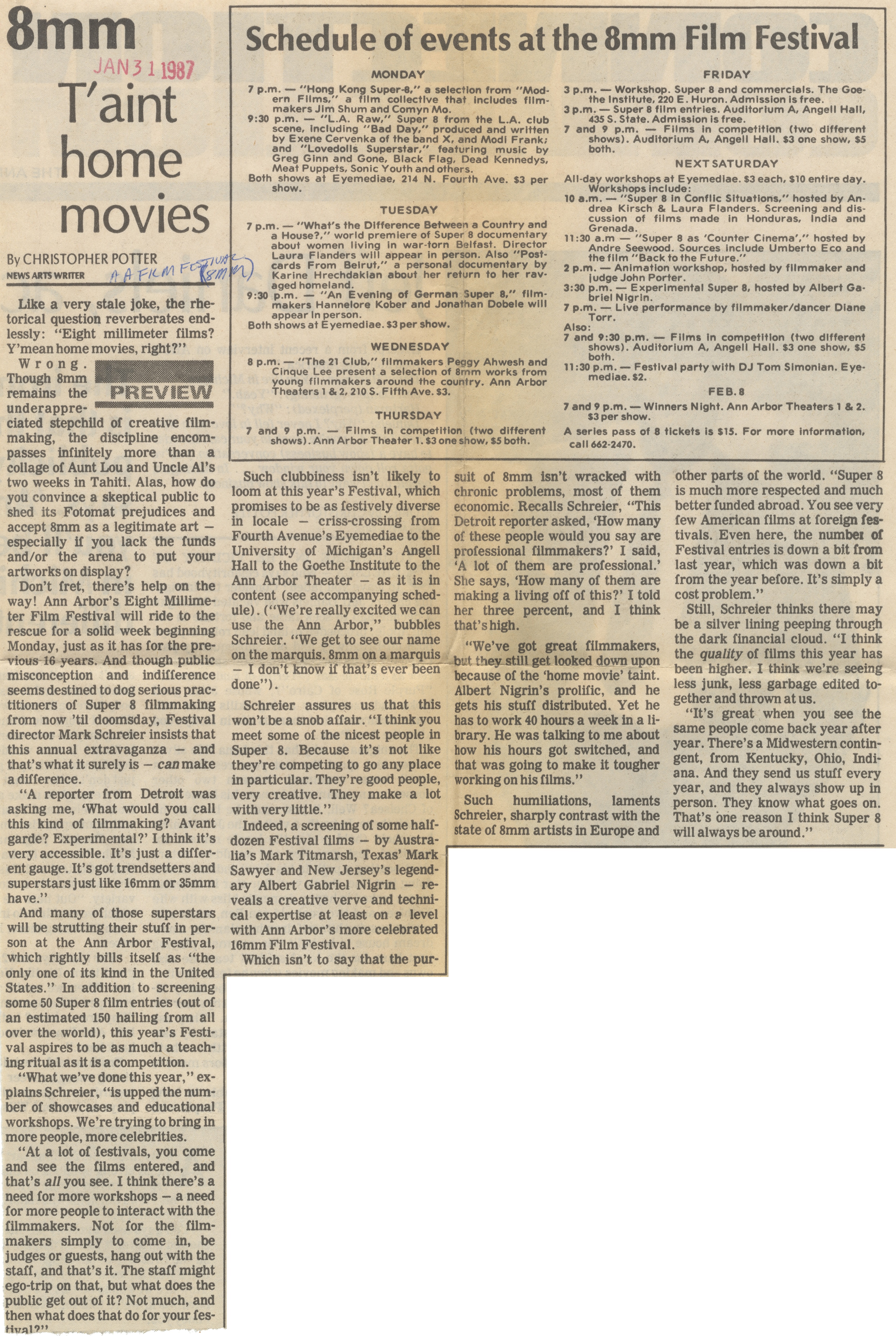 Though 8mm remains the underappreciated stepchild of creative film-making, the discipline encompasses infinitely more than a collage of Aunt Lou and Uncle Al’s two weeks in Tahiti. Alas, how do you convince a skeptical public to shed its Fotomat prejudices and accept 8mm as a legitimate art -especially if you lack the funds and/or the arena to put your artworks on display?

Don’t fret, there’s help on the way! Ann Arbor’s Eight Millimeter Film Festival will ride to the rescue for a solid week beginning Monday, just as it has for the previous16 years. And though public misconception and indifference seems destined to dog serious practitioners of Super 8 filmmaking from now ’til doomsday, Festival director Mark Schreier insists that this annual extravaganza - and that’s what it surely is - can make a difference.

“A reporter from Detroit was asking me, ‘What would you call this kind of filmmaking? Avant garde? Experimental?’ I think it’s very accessible. It’s just a different gauge. It’s got trendsetters and superstars just like 16mm or 35mm have.”

And many of those superstars will be strutting their stuff in person at the Ann Arbor Festival, which rightly bills itself as “the only one of its kind in the United States.” In addition to screening some 50 Super 8 film entries (out of an estimated 150 hailing from all over the world), this year’s Festival aspires to be as much a teaching ritual as it is a competition.

“What we’ve done this year," explains Schreier, “is upped the number of showcases and educational workshops. We’re trying to bring in more people, more celebrities.

“At a lot of festivals, you come and see the films entered, and that’s all you see. I think there’s a need for more workshops - a need for more people to interact with the filmmakers. Not for the filmmakers simply to come in, be judges or guests, hang out with the staff, and that’s it. The staff might ego-trip on that, but what does the public get out of it? Not much, and then what does that do for your festival?

Such clubbiness isn’t likely to loom at this year’s Festival, which promises to be as festively diverse in locale - criss-crossing from Fourth Avenue’s Eyemediae to the University of Michigan’s Angell Hall to the Goethe Institute to the Ann Arbor Theater - as it is in content (see accompanying schedule) .(“We’re really excited we can use the Ann Arbor,” bubbles Schreier. “We get to see our name on the marquis. 8mm on a marquis - I don’t know if that’s ever been done”).

Schreier assures us that this won’t be a snob affair. “I think you meet some of the nicest people in Super 8. Because it’s not like they’re competing to go any place in particular. They’re good people, very creative. They make a lot with very little.”

Which isn’t to say that the pursuit of 8mm isn’t wracked with chronic problems, most of them economic. Recalls Schreier, “This Detroit reporter asked, ‘How many of these people would you say are professional filmmakers?’ I said, ‘A lot of them are professional.’ She says, ‘How many of them are making a living off of this?’ I told her three percent, and I think that’s high.

“We’ve got great filmmakers, but they still get looked down upon because of the ‘home movie’ taint. Albert Nigrin’s prolific, and he gets his stuff distributed. Yet he has to work 40 hours a week in a library. He was talking to me about how his hours got switched, and that was going to make it tougher working on his films.”

Such humiliations, laments Schreier, sharply contrast with the state of 8mm artists in Europe andother parts of the world. “Super 8 is much more respected and much better funded abroad. You see very few American films at foreign festivals. Even here, the number of Festival entries is down a bit from last year, which was down a bit from the year before. It’s simply a cost problem.”

Still, Schreier thinks there may be a silver lining peeping through the dark financial cloud. “I think the quality of films this year has been higher. I think we’re seeing less junk, less garbage edited together and thrown at us.

“It’s great when you see the same people come back year after year. There’s a Midwestern contingent, from Kentucky, Ohio, Indiana. And they send us stuff every year, and they always show up in person. They know what goes on. That’s one reason I think Super 8 will always be around.”

Schedule of events at the 8mm Film Festival

7 p.m. — "What's the Difference Between a Country and a House?," world premiere of Super 8 documentary about women living In war-torn Belfast. Director Laura Flanders will appear in person. Also "Postcards From Beirut," a personal documentary by Karine Hrechdakian about her return to her ravaged homeland.

9:30 p.m. — "An Evening of German Super 8," filmmakers Hannelore Kober and Jonathan Dobele will appear In person.

Both shows at Eyemediae. $3 per show.

10 a.m. — "Super 8 In Conflict Situations," hosted by Andrea Klrsch & Laura Flanders. Screening and discussion of films made in Honduras, India and Grenada.

11:30 a.m — "Super 8 as 'Counter Cinema'," hosted by Andre Seewood. Sources include Umberto Eco and the film "Back to the Future."