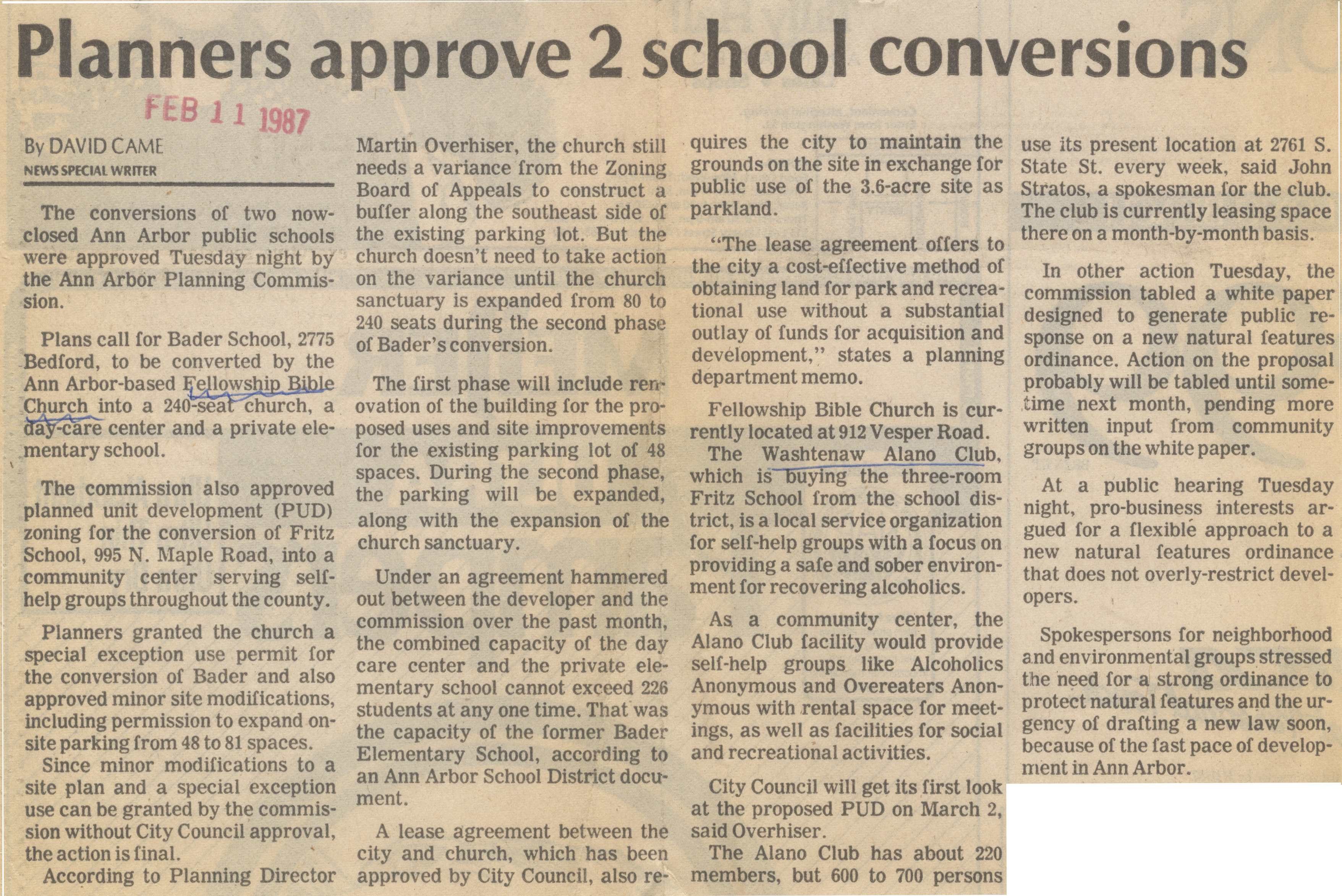 Plans call for Bader School, 2775 Bedford, to be converted by the Ann Arbor-based Fellowship Bible Church into a 240-seat-church, a day-care center and a private elementary school.

Planners granted the church a special exception use permit for the conversion of Bader and also approved minor site modifications, including permission to expand onsite parking from 48 to 81 spaces.

Since minor modifications to a site plan and a special exception use can be granted by the commission without City Council approval, the action is final.

According to Planning Director Martin Overhiser, the church still needs a variance from the Zoning Board of Appeals to construct a buffer along the southeast side of the existing parking lot. But the church doesn’t need to take action on the variance until the church sanctuary is expanded from 80 to 240 seats during the second phase of Bader’s conversion.

The first phase will include renovation of the building for the proposed uses and site improvements for the existing parking lot of 48 spaces. During the second phase, the parking will be expanded, along with the expansion of the church sanctuary.

Under an agreement hammered out between the developer and the commission over the past month, the combined capacity of the day care center and the private elementary school cannot exceed 226 students at any one time. That was the capacity of the former Bader Elementary School, according to an Ann Arbor School District document.

A lease agreement between the city and church, which has been approved by City Council, also requires the city to maintain the grounds on the site in exchange for public use of the 3.6-acre site as parkland.

“The lease agreement offers to the city a cost-effective method of obtaining land for park and recreational use without a substantial outlay of funds for acquisition and development,” states a planning department memo.

The Washtenaw Alano Club, which is buying the three-room Fritz School from the school district, is a local service organization for self-help groups with a focus on providing a safe and sober environment for recovering alcoholics.

As a community center, the Alano Club facility would provide self-help groups like Alcoholics Anonymous and Overeaters Anonymous with rental space for meetings, as well as facilities for social and recreational activities.

City Council will get its first look at the proposed PUD on March 2, said Overhiser.

The Alano Club has about 220 members, but 600 to 700 persons use its present location at 2761 S. State St. every week, said John Stratos, a spokesman for the club. The club is currently leasing space there on a month-by-month basis.

In other action Tuesday, the commission tabled a white paper designed to generate public response on a new natural features ordinance. Action on the proposal probably will be tabled until sometime next month, pending more written input from community groups on the white paper.

At a public hearing Tuesday night, pro-business interests argued for a flexible approach to a new natural features ordinance that does not overly-restrict developers.

Spokespersons for neighborhood and environmental groups stressed the need for a strong ordinance to protect natural features and the urgency of drafting a new law soon, because of the fast pace of development in Ann Arbor.