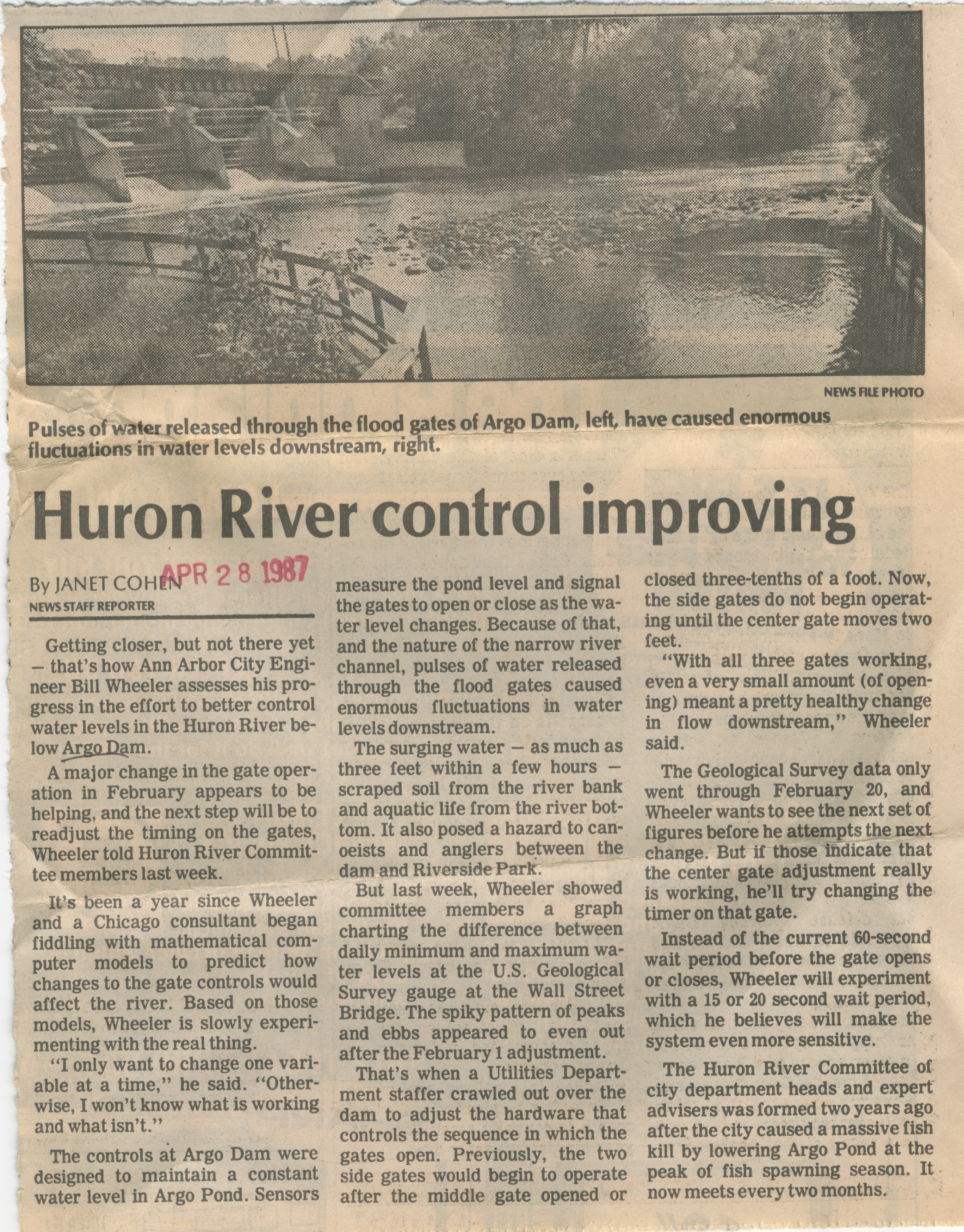 Getting closer, but not there yet - that’s how Ann Arbor City Engineer Bill Wheeler assesses his progress in the effort to better control water levels in the Huron River below Argo Dam.

A major change in the gate operation in February appears to be helping, and the next step will be to readjust the timing on the gates, Wheeler told Huron River Committee members last week.

It’s been a year since Wheeler and a Chicago consultant began fiddling with mathematical computer models to predict how changes to the gate controls would affect the river. Based on those models, Wheeler is slowly experimenting with the real thing.

“I only want to change one variable at a time,” he said. “Otherwise, I won’t know what is working and what isn’t.”

The controls at Argo Dam were designed to maintain a constant water level in Argo Pond. Sensors measure the pond level and signal the gates to open or close as the water level changes. Because of that, and the nature of the narrow river channel, pulses of water released through the flood gates caused enormous fluctuations in water levels downstream.

The surging water - as much as three feet within a few hours -scraped soil from the river bank and aquatic life from the river bottom. It also posed a hazard to canoeists and anglers between the dam and Riverside Park.

But last week, Wheeler showed committee members a graph charting the difference between daily minimum and maximum water levels at the U.S. Geological Survey gauge at the Wall Street Bridge. The spiky pattern of peaks and ebbs appeared to even out after the February 1 adjustment.

That’s when a Utilities Department staffer crawled out over the dam to adjust the hardware that controls the sequence in which the gates open. Previously, the two side gates would begin to operate after the middle gate opened or closed three-tenths of a foot. Now, the side gates do not begin operating until the center gate moves two feet.

“With all three gates working, even a very small amount (of opening) meant a pretty healthy change in flow downstream,” Wheeler said.

The Geological Survey data only went through February 20, and Wheeler wants to see the next set of figures before he attempts the next change. But if those indicate that the center gate adjustment really is working, he’ll try changing the timer on that gate.

Instead of the current 60-second wait period before the gate opens or closes, Wheeler will experiment with a 15 or 20 second wait period, which he believes will make the system even more sensitive.

The Huron River Committee of city department heads and expert advisers was formed two years ago after the city caused a massive fish kill by lowering Argo Pond at the peak of fish spawning season. It now meets every two months.