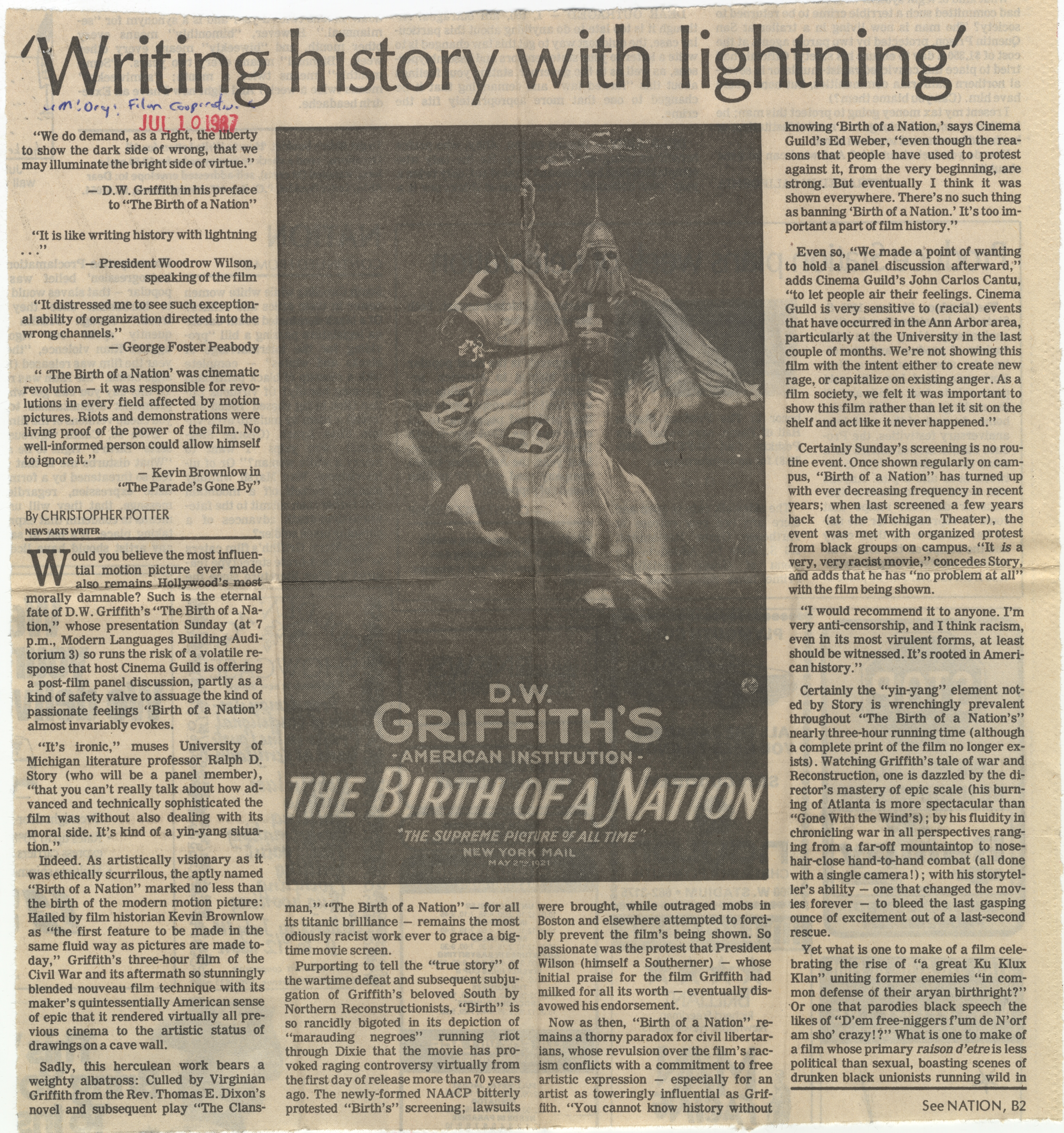 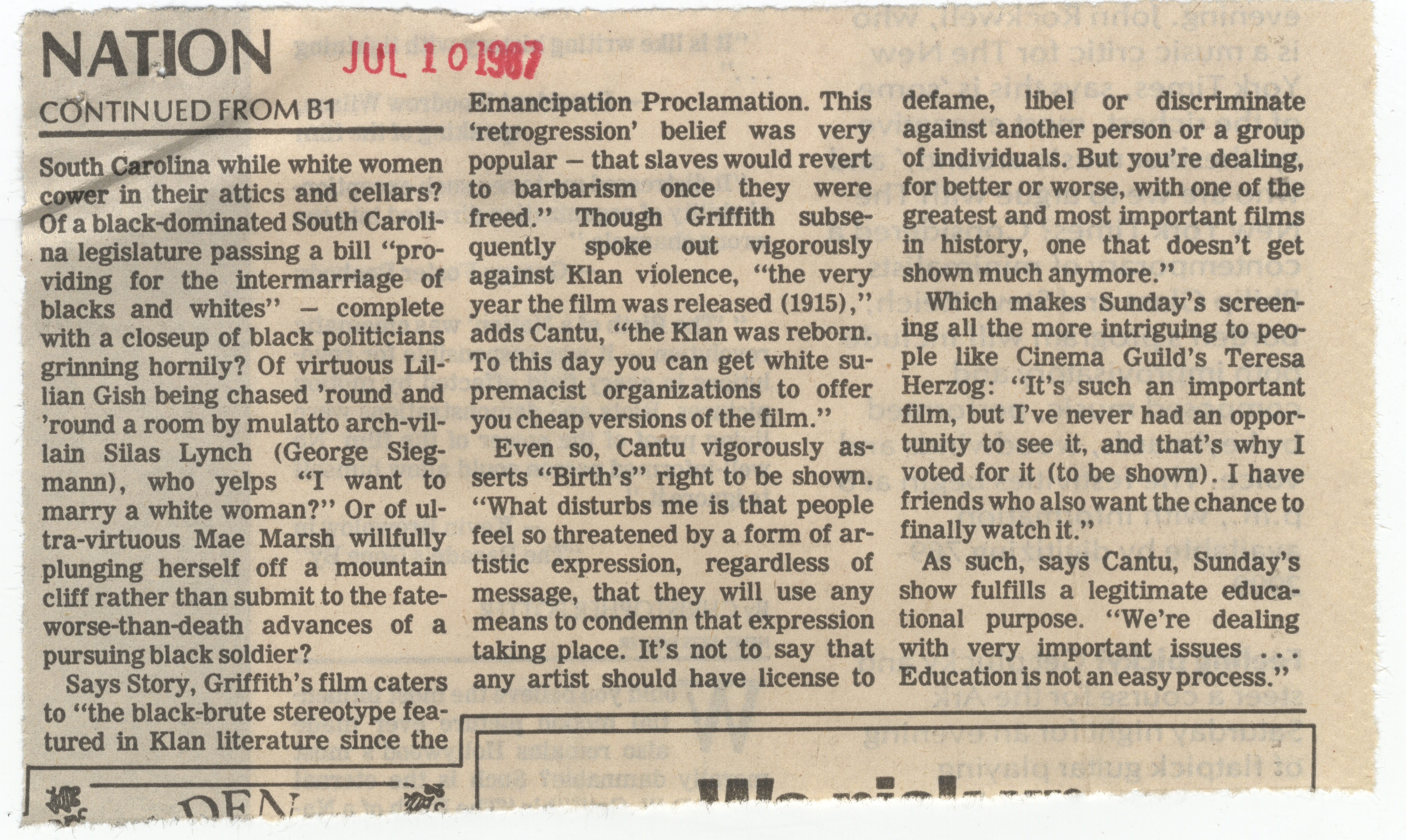 "We do demand, as a rigfit, the liberty
i show the dark side of wrong, that we
-iay illuminate the bright side of virtue."

- D.W. Griffith in his preface
to "The Birth of a Nation"

— President WoodrowWilson,
speaking of the film

"It distressed xception-
al ability of orgaiurciuou uu i-m-d into the
wrong channels."

" "The Birth of a Nation' was cinematic
revolution — it was rpKonnsihie for revo-
lutions in ever', y motion
pictures. Riots nans were
livii' - ; if the power of the film. No
we; person could allow himself
to ignore it."

- Kevin Brownlow in
"The Parade's Gone By"

sponsetii; ' • •;•' '•' < ;i""'i) a post-film panel discussion, partly as a
kind of safety valve to assuage the kind of
passionate feelings "Birth of a Nation"
almost invariably evokes.

"It's ironic," muses University of
Michigan literature professor Ralph D.
Story (who will be a panel member),
"that you can't really talk about how ad-
vanced and technically sophisticated the
film was without also dealing with its
moral side. It's kind of a yin-yang situa-
tion."

Indeed. As artistically v -" "•'•••• 's it
was ethically scurrilous, U' ied
"Birth of a Nation" marked iiu icss itian
the birth of the modern motion picture:

Hailed by film historian Kevin Brownlow
as "the first feature to be made in th
same fluid way as pictures are made t
day," '"Wf'ii'?- lirpf-hour film of the
Ci' ih so stunningly
bic 'ii 'lii • 'echnique with its
-naker's quintessentially American sense
:.f epic that it rendered virtually all pre-
vious cinema to the artistic status of
drawings on a cave wall.

Sadly, this 1i!--"iric,ir, wrfe b""- "
weighty albatr
Griffith from the Hs 'i
novel and subsequent play "The Clans-

knowing 'Birth of a Nation,' says Cinema
Guild's Ed Weber, "even though the rea-
sons that people have used to protest
against it, from the very beginning, are
strong. But . i;y I think it was
shown every re's no such thing
as banning 'Bi» i., u.« nation.' It's too im-
portant a part of film history."

were brought, while outraged mobs in
Boston and elsewhere attempted to forci-
bly prevent the film's being shown. So
passionate was the protest that President
Wilson (himself a Southerner) - whose
initial praise for the film Griffith had
milked for a" its wnrth — eventually dis-
avowed his c '-

Now as th< i of a Nation" re-
mains a thorny paradox for civil libertar-
ians, whose revulsion over the film's rac-

Certainly Sunday's screening is no rou-
tine event. Once sh- — ——'arly on cam-
pus, "Birth of a -s turned up
with ever decreasi; i.i.ncy in recent
years; when last screened a few years
back (at the Michigan Theater), the
event was met with organized protest
from black groups on campus. "It is a
very, very racist movie," concedes Story,
and adds that he has "no problem at all"
with the film being shown.

"I would recommend it to anyone. I'm
very anti-censorship, and I think racism,
even in its most virulent forms, at least
should be witnessed. It's rooted in Ameri-
can history."

Certainly the "yin-yang" element not-
ed by Story is wrenchingly prevalent
throughout "The Birth of a Nation's"
nearly three-hour running time (although
a complete print o'"'- *"~ no longer ex-
ists) . Watching C of war and
Reconstruction, or > 'cd by the di-
rector's mastery of epic scale (his burn-
ing of Atlanta is more spectacular than
"Gone With the Wind's);'- "' " 'dity in
chronicling war in all p ; rang-
ing from a tar-off moun i . o nose-
hair-close hand-to-hand combat (all done
with a single camera!); with his storytel-
ler's ability - one that c1' -T—-" "-,e mov-
ies forever — to bleed ;sping
ounce of excitement out second
rescue.

Yet what is one to make of a film cele-
brating the rise of "a great Ku Klux
Klan" uniting former enemies "in com-
mon defense of their aryan birthright?"
Or one that parodies black speech the
likes of "D'em free-niggers turn dc N'orf
am she . • '" What is one to make of
a fiin nary raison d'etre is less
politicm n.mi .rf-xual, boasting scenes of
drunken black unionists running wild in

South Carolina while white women
cower in their attics and cellars?
Of a black-dominated South Caroli-
na ' ^-lature passing a bill "pro-
v- or the intermarriage of
a closeup of black politicians
ihig homily? Of virtuous Lil-
ian Gish being chased 'round and
round a room by mulatto arch-vil-
lain Silas Lynch (George Sieg-
mann), who yelps < marry a white woman?" Or of ul-
tra-virtuous Mae Marsh willfully
plunging herself nountain
r'tff r-ther than subimi io the fate-
an-death advances of a
p

Emancipation Proclamation. This
'retrogression' belief was very
popular -1? i revert
to barbaric ,, were
freed." Though Griffith subse-
quently spoke out vigorously
against Klan violence, "the very

Even so, Cantu vigorously as-
serts "Birth's" right to be shown.
"What disturbs me is that people
feel so threatened by a form of ar-
tistic expression, regardless of
message, that they will nw any
means to condemn I son
taking place. It's not to say ihat
any artist should have license to

defame, libel r" ^'"-'-rnr-te
against another p ip
of individuals. But yc g,
for better or worse, w. iie
greatest and most important films
in history, one that doesn't get
shown much anymore."

Which makes Sunday's screen-
ing all the more intriguing to peo-
ple like Cinema Guild's Teresa
Herzog: "It's such an important
film, but I've nev an oppor-
tunity to see it, t»,,u mAfs why I
voted for it (to be shown). I have
f ~ - -J - who also want the chance to
vatchit."