What will we do without Streetlight Theater? 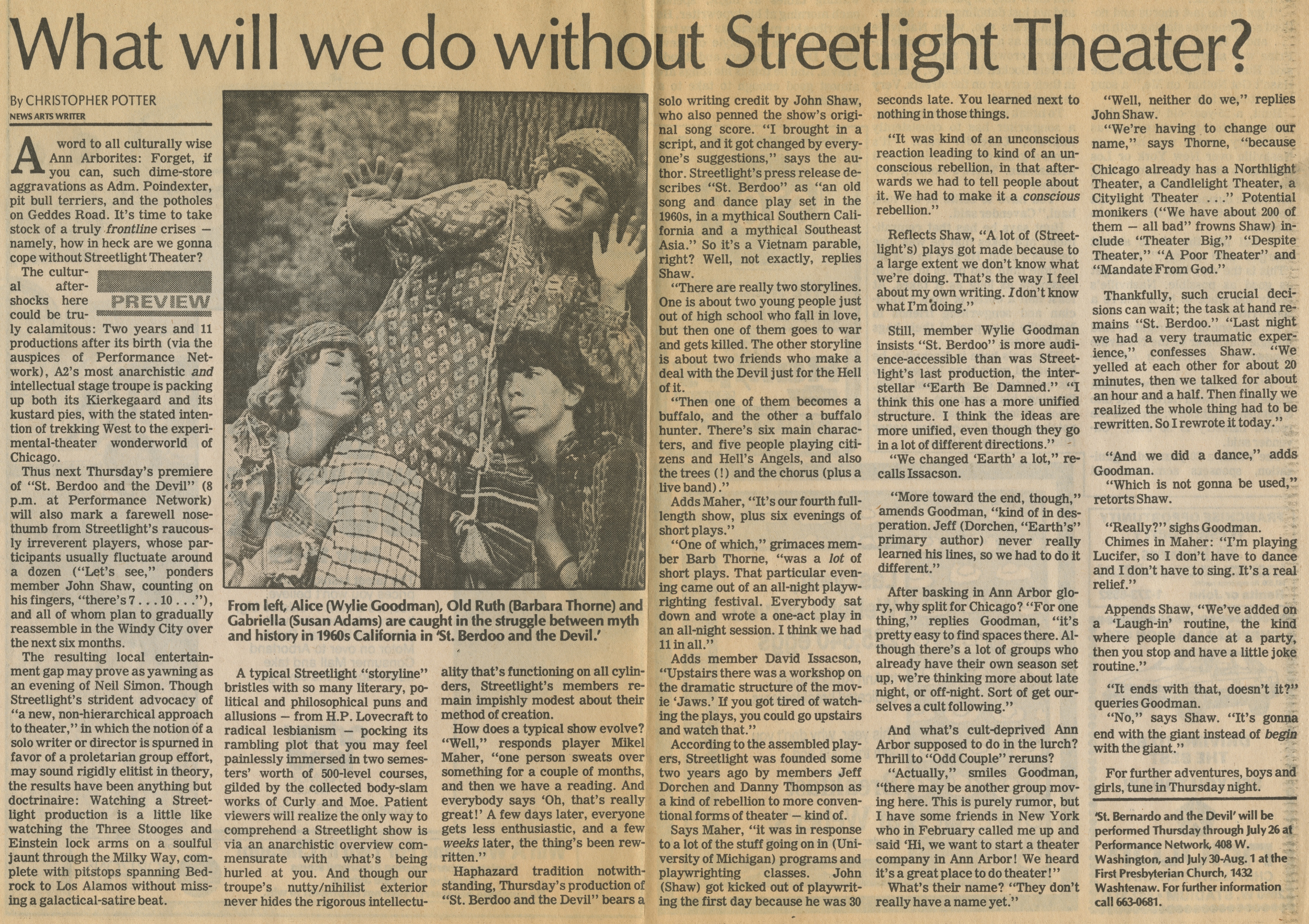 ﻿What will we do without Streetlight Theater?

A word to all culturally wise Ann Arborites: Forget, if you can, such dime-store aggravations as Adm. Poindexter, pit bull terriers, and the potholes on Geddes Road. It’s time to take stock of a truly frontline crises - namely, how in heck are we gonna cope without Streetlight Theater?

The cultural aftershocks here could be truly calamitous: Two years and 11 productions after its birth (via the auspices of Performance Network), A2’s most anarchistic and intellectual stage troupe is packing up both its Kierkegaard and its kustard pies, with the stated intention of trekking West to the experimental-theater wonderworld of Chicago.

Thus next Thursday’s premiere of “St. Berdoo and the Devil” (8 p.m. at Performance Network) will also mark a farewell nose-thumb from Streetlight’s raucously irreverent players, whose participants usually fluctuate around a dozen (“Let’s see,” ponders member John Shaw, counting on his fingers, “there’s 7... 10 ...”), and all of whom plan to gradually reassemble in the Windy City over the next six months.

The resulting local entertainment gap may prove as yawning as an evening of Neil Simon. Though Streetlight’s strident advocacy of “a new, non-hierarchical approach to theater,” in which the notion of a solo writer or director is spumed in favor of a proletarian group effort, may sound rigidly elitist in theory, the results have been anything but doctrinaire: Watching a Streetlight production is a little like watching the Three Stooges and Einstein lock arms on a soulful jaunt through the Milky Way, complete with pitstops spanning Bedrock to Los Alamos without missing a galactical-satire beat.

A typical Streetlight “storyline” bristles with so many literary, political and philosophical puns and allusions - from H.P. Lovecraft to radical lesbianism - pocking its rambling plot that you may feel painlessly immersed in two semesters’ worth of 500-level courses, gilded by the collected body-slam works of Curly and Moe. Patient viewers will realize the only way to comprehend a Streetlight show is via an anarchistic overview commensurate with what’s being hurled at you. And though our troupe’s nutty/nihilist exterior never hides the rigorous intellectuality that’s functioning on all cylinders, Streetlight’s members remain impishly modest about their method of creation.

How does a typical show evolve? “Well,” responds player Mikel Maher, “one person sweats over something for a couple of months, and then we have a reading. And everybody says ‘Oh, that’s really great!’ A few days later, everyone gets less enthusiastic, and a few weeks later, the thing’s been rewritten.”

Haphazard tradition notwithstanding, Thursday’s production of “St. Berdoo and the Devil” bears a solo writing credit by John Shaw, who also penned the show’s original song score. “I brought in a script, and it got changed by everyone’s suggestions,” says the author. Streetlight’s press release describes “St. Berdoo” as “an old song and dance play set in the 1960s, in a mythical Southern California and a mythical Southeast Asia.” So it’s a Vietnam parable, right? Well, not exactly, replies Shaw.

“There are really two storylines. One is about two young people just out of high school who fall in love, but then one of them goes to war and gets killed. The other storyline is about two friends who make a deal with the Devil just for the Hell of it.

“Then one of them becomes a buffalo, and the other a buffalo hunter. There’s six main characters, and five people playing citizens and Hell’s Angels, and also the trees (!) and the chorus (plus a live band).”

“One of which,” grimaces member Barb Thorne, “was a lot of short plays. That particular evening came out of an all-night playwrighting festival. Everybody sat down and wrote a one-act play in an all-night session. I think we had 11 in all.”

Adds member David Issacson, “Upstairs there was a workshop on the dramatic structure of the movie ‘Jaws.’ If you got tired of watching the plays, you could go upstairs and watch that.”

According to the assembled players, Streetlight was founded some two years ago by members Jeff Dorchen and Danny Thompson as a kind of rebellion to more conventional forms of theater — kind of.

Says Maher, “it was in response to a lot of the stuff going on in (University of Michigan) programs and playwrighting classes. John (Shaw) got kicked out of playwriting the first day because he was 30 seconds late. You learned next to nothing in those things.

Reflects Shaw, “A lot of (Streetlight’s) plays got made because to a large extent we don’t know what we’re doing. That’s the way I feel about my own writing, I don’t know what I’m doing.”

Still, member Wylie Goodman insists “St. Berdoo” is more audience-accessible than was Streetlight’s last production, the interstellar “Earth Be Damned.” “I think this one has a more unified structure. I think the ideas are more unified, even though they go in a lot of different directions.”

“More toward the end, though,” amends Goodman, “kind of in desperation. Jeff (Dorchen, “Earth’s” primary author) never really learned his lines, so we had to do it different.”

After basking in Ann Arbor glory, why split for Chicago? “For one thing,” replies Goodman, “it’s pretty easy to find spaces there. Although there’s a lot of groups who already have their own season set up, we’re thinking more about late night, or off-night. Sort of get ourselves a cult following.”

And what’s cult-deprived Ann Arbor supposed to do in the lurch? Thrill to “Odd Couple” reruns?

“Actually,” smiles Goodman, “there may be another group moving here. This is purely rumor, but I have some friends in New York who in February called me up and said ‘Hi, we want to start a theater company in Ann Arbor! We heard it’s a great place to do theater! ”

What’s their name? “They don’t really have a name yet.”

“Well, neither do we,” replies John Shaw.

“We’re having to change our name,” says Thome, “because Chicago already has a Northlight Theater, a Candlelight Theater, a Citylight Theater ...” Potential monikers (“We have about 200 of them - all bad” frowns Shaw) include “Theater Big,” “Despite Theater,” “A Poor Theater” and “Mandate From God.”

Thankfully, such crucial decisions can wait; the task at hand remains “St. Berdoo.” “Last night we had a very traumatic experience,” confesses Shaw. “We yelled at each other for about 20 minutes, then we talked for about an hour and a half. Then finally we realized the whole thing had to be rewritten. So I rewrote it today.”

“And we did a dance,” adds Goodman.

“Which is not gonna be used,” retorts Shaw.

Appends Shaw, “We’ve added on a ‘Laugh-in’ routine, the kind where people dance at a party, then you stop and have a little joke routine.”

“It ends with that, doesn’t it?” queries Goodman.

For further adventures, boys and girls, tune in Thursday night.

From left, Alice (Wylie Goodman), Old Ruth (Barbara Thorne) and Gabriella (Susan Adams) are caught in the struggle between myth and history in 1960s California in 'St. Berdoo and the Devil.'

'St. Bernardo and the Devil' will be performed Thursday through July 26 at Performance Network, 408 W. Washington, and July 30-Aug. 1 at the First Presbyterian Church, 1432 Washtenaw. For further information call 663-0681.