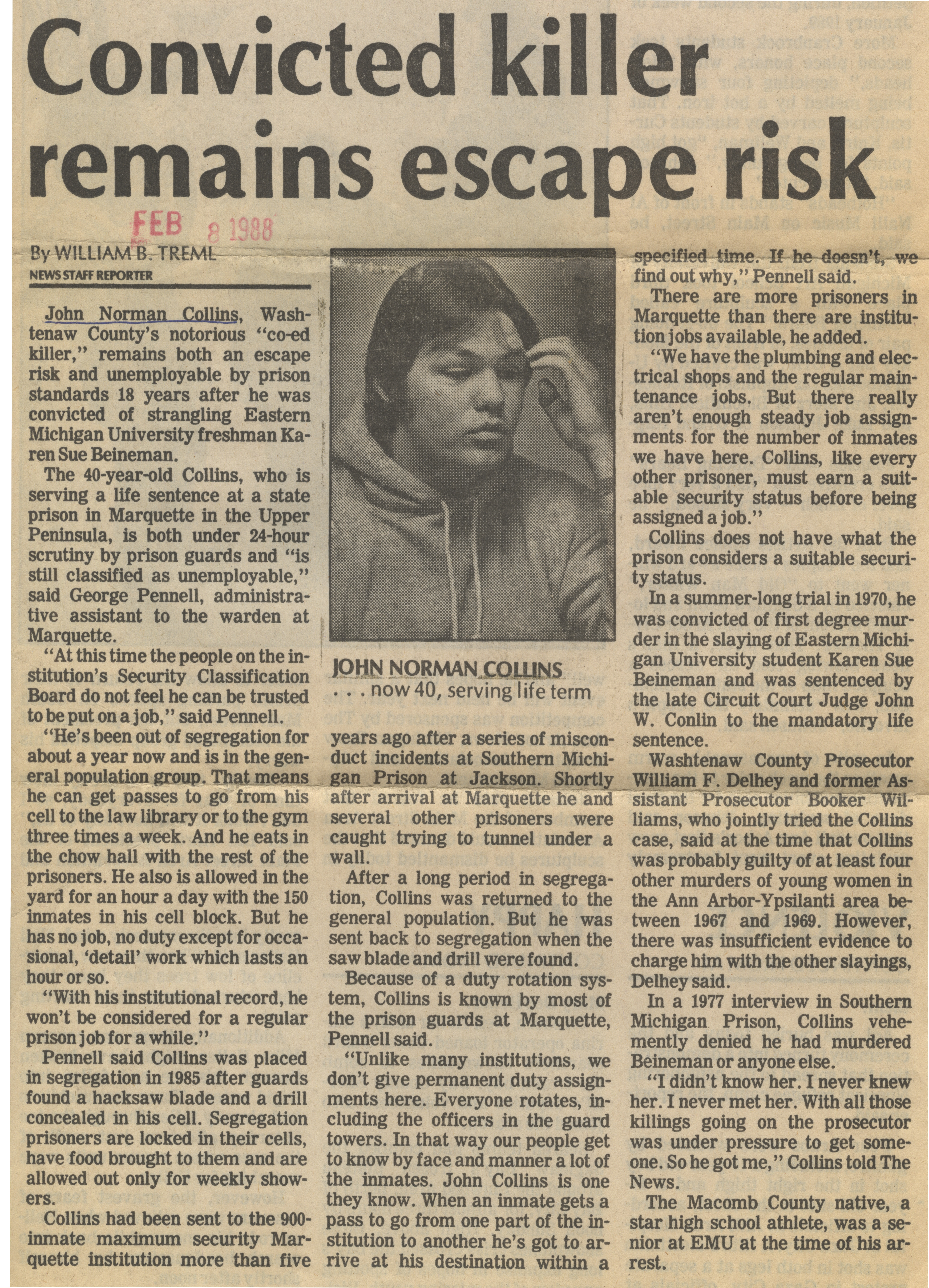 The 40-year-old Collins, who is serving a life sentence at a state prison in Marquette in the Upper Peninsula, is both under 24-hour scrutiny by prison guards and “is still classified as unemployable,” said George Pennell, administrative assistant to the warden at Marquette.

“At this time the people on the institution’s Security Classification Board do not feel he can be trusted to be put on a job,” said Pennell.

“He’s been out of segregation for about a year now and is in the general population group. That means he can get passes to go from his cell to the law library or to the gym three times a week. And he eats in the chow hall with the rest of the prisoners. He also is allowed in the yard for an hour a day with the 150 inmates in his cell block. But he has no job, no duty except for occasional, ‘detail’ work which lasts an hour or so.

“With his institutional record, he won’t be considered for a regular prison job for a while.”

Pennell said Collins was placed in segregation in 1985 after guards found a hacksaw blade and a drill concealed in his cell. Segregation prisoners are locked in their cells, have food brought to them and are allowed out only for weekly showers.

Collins had been sent to the 900-inmate maximum security Marquette institution more than five years ago after a series of misconduct incidents at Southern Michigan Prison at Jackson. Shortly after arrival at Marquette he and several other prisoners were caught trying to tunnel under a wall.

After a long period in segregation, Collins was returned to the general population. But he was sent back to segregation when the saw blade and drill were found.

Because of a duty rotation system, Collins is known by most of the prison guards at Marquette, Pennell said.

“Unlike many institutions, we don’t give permanent duty assignments here. Everyone rotates, including the officers in the guard towers. In that way our people get to know by face and manner a lot of the inmates. John Collins is one they know. When an inmate gets a pass to go from one part of the institution to another he’s got to arrive at his destination within a specified time. If-he doesn’t, we find out why,” Pennell said.

There are more prisoners in Marquette than there are institution jobs available, he added.

“We have the plumbing and electrical shops and the regular maintenance jobs. But there really aren’t enough steady job assignments for the number of inmates we have here. Collins, like every other prisoner, must earn a suitable security status before being assigned a job.”

Collins does not have what the prison considers a suitable security status.

In a summer-long trial in 1970, he was convicted of first degree murder in the slaying of Eastern Michigan University student Karen Sue Beineman and was sentenced by the late Circuit Court Judge John W. Conlin to the mandatory life sentence.

Washtenaw County Prosecutor William F. Delhey and former Assistant Prosecutor Booker Williams, who jointly tried the Collins case, said at the time that Collins was probably guilty of at least four other murders of young women in the Ann Arbor-Ypsilanti area between 1967 and 1969. However, there was insufficient evidence to charge him with the other slayings, Delhey said.

In a 1977 interview in Southern Michigan Prison, Collins vehemently denied he had murdered Beineman or anyone else.

“I didn’t know her. I never knew her. I never met her. With all those killings going on the prosecutor was under pressure to get someone. So he got me,” Collins told The News.

The Macomb County native, a star high school athlete, was a senior at EMU at the time of his arrest.