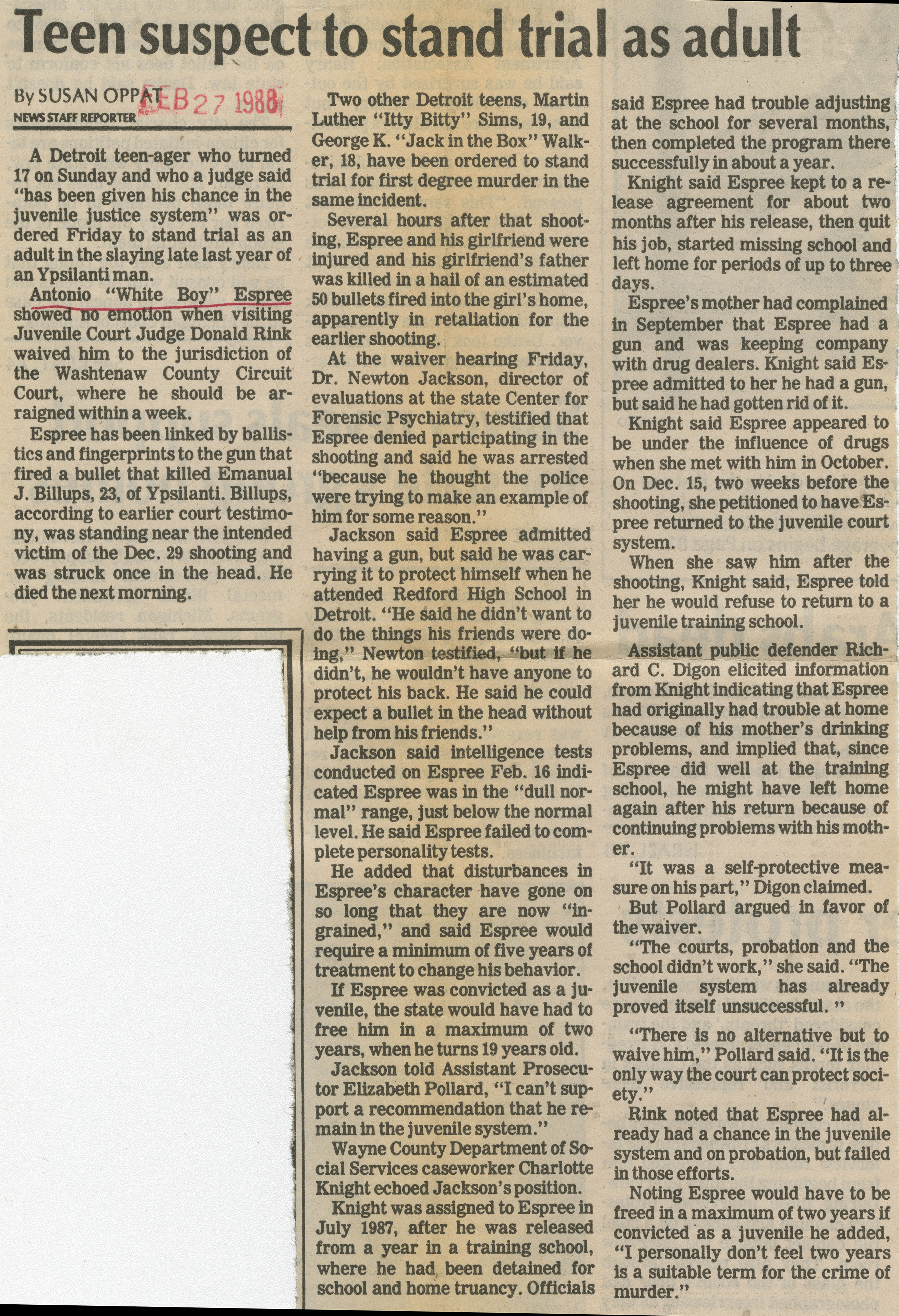 A Detroit teen-ager who turned 17 on Sunday and who a judge said “has been given his chance in the juvenile justice system” was ordered Friday to stand trial as an adult in the slaying late last year of an Ypsilanti man.

Antonio “White Boy” Espree showed no emotion when visiting Juvenile Court Judge Donald Rink waived him to the jurisdiction of the Washtenaw County Circuit Court, where he should be arraigned within a week.

Espree has been linked by ballistics and fingerprints to the gun that fired a bullet that killed Emanual J. Billups, 23, of Ypsilanti. Billups, according to earlier court testimony, was standing near the intended victim of the Dec. 29 shooting and was struck once in the head. He died the next morning.

Two other Detroit teens, Martin Luther “Itty Bitty” Sims, 19, and George K. “Jack in the Box” Walker, 18, have been ordered to stand trial for first degree murder in the same incident.

Several hours after that shooting, Espree and his girlfriend were injured and his girlfriend’s father was killed in a hail of an estimated 50 bullets fired into the girl’s home, apparently in retaliation for the earlier shooting.

At the waiver hearing Friday, Dr. Newton Jackson, director of evaluations at the state Center for Forensic Psychiatry, testified that Espree denied participating in the shooting and said he was arrested "because he thought the police were trying to make an example of him for some reason.”

Jackson said Espree admitted having a gun, but said he was carrying it to protect himself when he attended Bedford High School in Detroit. “He said he didn’t want to do the things his friends were doing,” Newton testified, “but if he didn’t, he wouldn’t have anyone to protect his back. He said he could expect a bullet in the head without help from his friends.”

He added that disturbances in Espree’s character have gone on so long that they are now “ingrained,” and said Espree would require a minimum of five years of treatment to change his behavior.

If Espree was convicted as a juvenile, the state would have had to free him in a maximum of two years, when he turns 19 years old.

Jackson told Assistant Prosecutor Elizabeth Pollard, “I can’t support a recommendation that he remain in the juvenile system.”

Knight was assigned to Espree in July 1987, after he was released from a year in a training school, where he had been detained for school and home truancy. Officials said Espree had trouble adjusting at the school for several months, then completed the program there successfully in about a year.

Knight said Espree kept to a release agreement for about two months after his release, then quit his job, started missing school and left home for periods of up to three days.

Espree’s mother had complained in September that Espree had a gun and was keeping company with drug dealers. Knight said Espree admitted to her he had a gun, but said he had gotten rid of it.

Knight said Espree appeared to be under the influence of drugs when she met with him in October. On Dec. 15, two weeks before the shooting, she petitioned to have Espree returned to the juvenile court system.

When she saw him after the shooting, Knight said, Espree told her he would refuse to return to a juvenile training school.

Assistant public defender Richard C. Digon elicited information from Knight indicating that Espree had originally had trouble at home because of his mother’s drinking problems, and implied that, since Espree did well at the training school, he might have left home again after his return because of continuing problems with his mother.

“It was a self-protective measure on his part,” Digon claimed.

But Pollard argued in favor of the waiver.

“The courts, probation and the school didn’t work,” she said. “The juvenile system has already proved itself unsuccessful. ”

“There is no alternative but to waive him,” Pollard said. “It is the only way the court can protect society.”

Rink noted that Espree had already had a chance in the juvenile system and on probation, but failed in those efforts.

Noting Espree would have to be freed in a maximum of two years if convicted as a juvenile he added, “I personally don’t feel two years is a suitable term for the crime of murder.”