'Hail to Chief' gets student vote 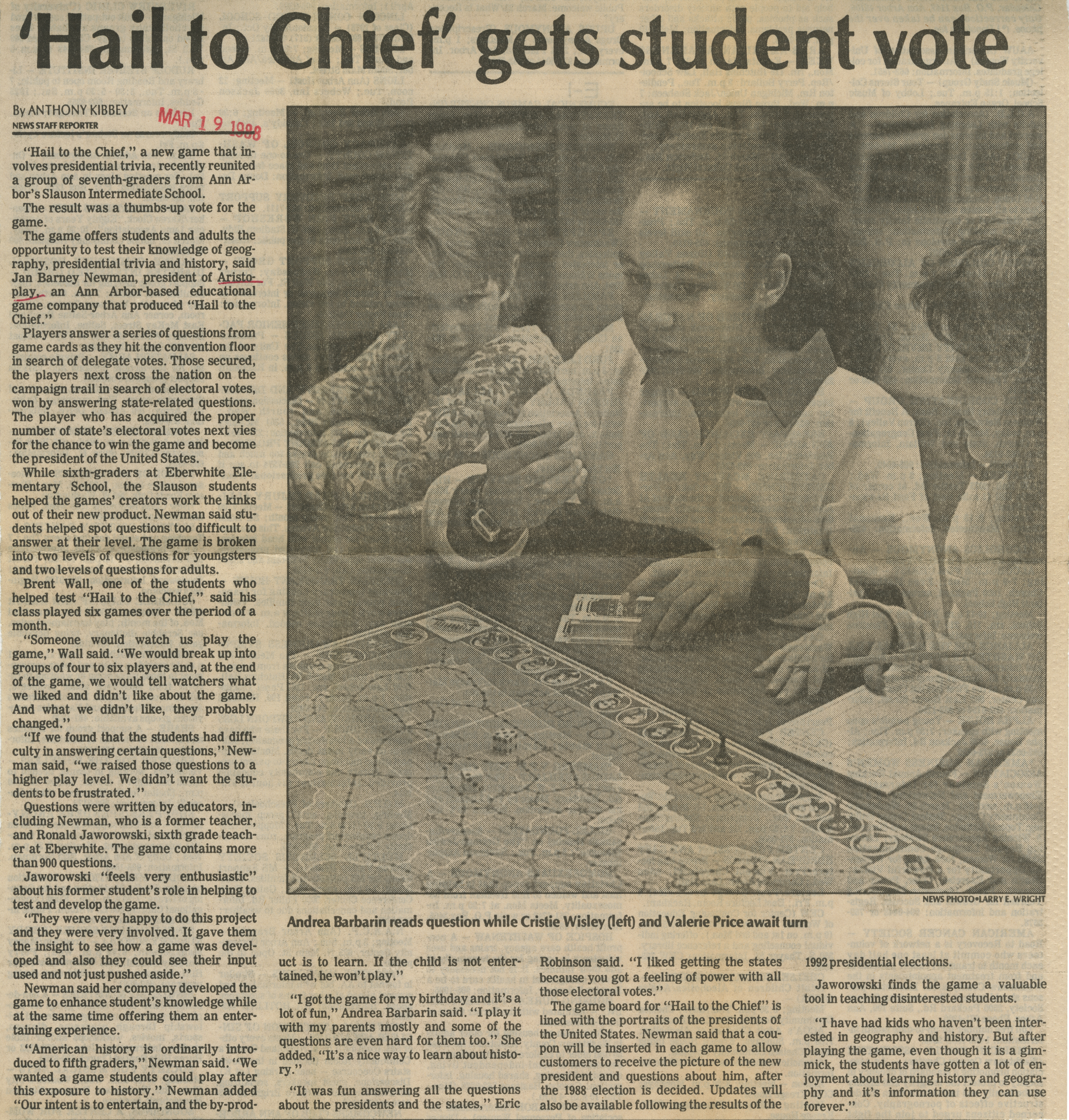 ﻿'Hail to Chief' gets student vote

"Hail to the Chief," a new game that involves presidential trivia, recently reunited a group of seventh-graders from Ann Arbor's Slauson Intermediate School.

The result was a thumbs-up vote for the game.

The game offers students and adults the opportunity to test their knowledge of geography, presidential trivia and history, said Jan Barney Newman, president of Aristoplay, an Ann Arbor-based educational game company that produced "Hail to the Chief."

Players answer a series of questions from game cards as they hit the convention floor in search of delegate votes. Those secured, the players next cross the nation on the campaign trail in search of electoral votes won by answering state-related questions. The player who has acquired the proper number of state's electoral votes next vies for the chance to win the game and become the president of the United States.

Brent Wall, one of the students who helped test "Hail to the Chief," said his class played six games over the period of a month.

"Someone would watch us play the game," Wall said. "We would break up into groups of four to six players and, at the end of the game, we would tell watchers what we liked and didn't like about the game. And what we didn't like, they probably changed."

"If we found that the students had difficulty in answering certain questions," Newman said, "we raised those questions to a higher play level. We didn't want the students to be frustrated."

Questions were written by educators, including Newman, who is a former teacher, and Ronald Jaworowski, sixth grade teacher at Eberwhite. The game contains more than 900 questions.

Jaworowski "feels very enthusiastic" about his former student's role in helping to test and develop the game.

"They were very happy to do this project and they were very involved. It gave them the insight to see how a game was developed and also they could see their input used and not just pushed aside."

Newman said her company developed the game to enhance student's knowledge while at the same time offering them an entertaining experience.

"American history is ordinarily introduced to fifth graders," Newman said. "We wanted a game students could play after this exposure to history." Newman added "Our intent is to entertain, and the by-product is to learn. If the child is not entertained, he won't play."

"I got the game for my birthday and it's a lot of fun," Andrea Barbarin said. "I play it with my parents mostly and some of the questions are even hard for them too." She added, "It's a nice way to learn about history."

"It was fun answering all the questions about the presidents and the states," Eric Robinson said. "I liked getting the states because you got a feeling of power with all those electoral votes."

The game board for "Hail to the Chief" is lined with the portraits of the presidents of the United States. Newman said that a coupon will be inserted in each game to allow customers to receive the picture of the new president and questions about him, after the 1988 election is decided. Updates will also be available following the results of the 1992 presidential elections.

"I have had kids who haven't been interested in geography and history. But after playing the game, even though it is a gimmick, the students have gotten a lot of enjoyment about learning history and geography and it's information they can use forever."