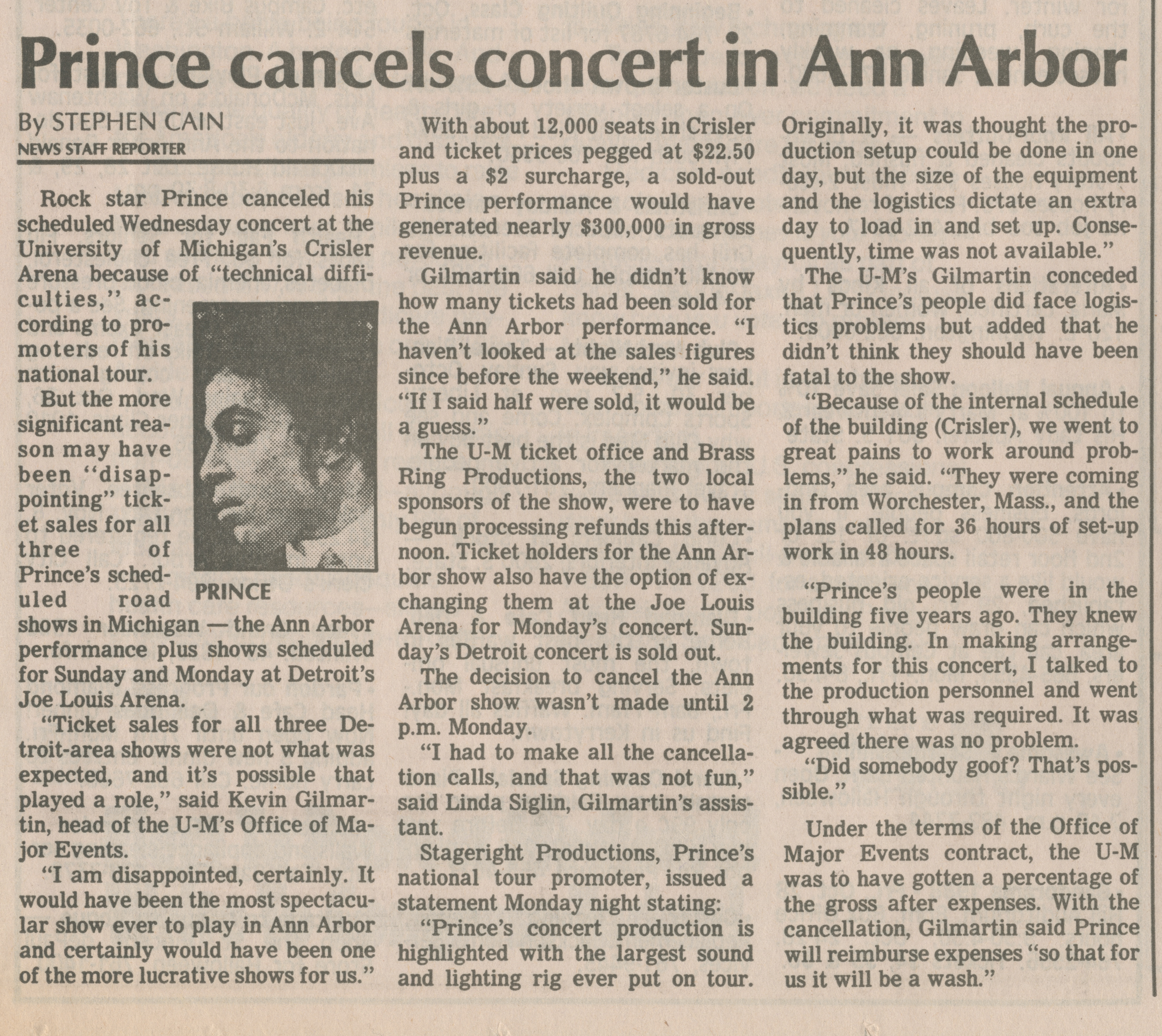 Rock star Prince canceled his scheduled Wednesday concert at the University of Michigan’s Crisler Arena because of “technical difficulties,” according to promoters of his national tour.

But the more significant reason may have been ‘‘disappointing” ticket sales for all three of Prince’s scheduled road shows in Michigan — the Ann Arbor performance plus shows scheduled for Sunday and Monday at Detroit’s Joe Louis Arena.

“Ticket sales for all three Detroit-area shows were not what was expected, and it’s possible that played a role,” said Kevin Gilmartin, head of the U-M’s Office of Major Events.

With about 12,000 seats in Crisler and ticket prices pegged at $22.50 plus a $2 surcharge, a sold-out Prince performance would have generated nearly $300,000 in gross revenue.

Gilmartin said he didn’t know how many tickets had been sold for the Ann Arbor performance. “I haven’t looked at the sales figures since before the weekend,” he said. “If I said half were sold, it would be a guess.”

The U-M ticket office and Brass Ring Productions, the two local sponsors of the show, were to have begun processing refunds this afternoon. Ticket holders for the Ann Arbor show also have the option of exchanging them at the Joe Louis Arena for Monday’s concert. Sunday’s Detroit concert is sold out.

The decision to cancel the Ann Arbor show wasn’t made until 2 p.m. Monday.

“I had to make all the cancellation calls, and that was not fun,” said Linda Siglin, Gilmartin’s assistant.

Originally, it was thought the production setup could be done in one day, but the size of the equipment and the logistics dictate an extra day to load in and set up. Consequently, time was not available.”

The U-M’s Gilmartin conceded that Prince’s people did face logistics problems but added that he didn’t think they should have been fatal to the show.

“Because of the internal schedule of the building (Crisler), we went to great pains to work around problems,” he said. “They were coming in from Worchester, Mass., and the plans called for 36 hours of set-up work in 48 hours.

“Prince’s people were in the building five years ago. They knew the building. In making arrangements for this concert, I talked to the production personnel and went through what was required. It was agreed there was no problem.

“Did somebody goof? That’s possible.”

Under the terms of the Office of Major Events contract, the U-M was to have gotten a percentage of the gross after expenses. With the cancellation, Gilmartin said Prince will reimburse expenses “so that for us it will be a wash.”