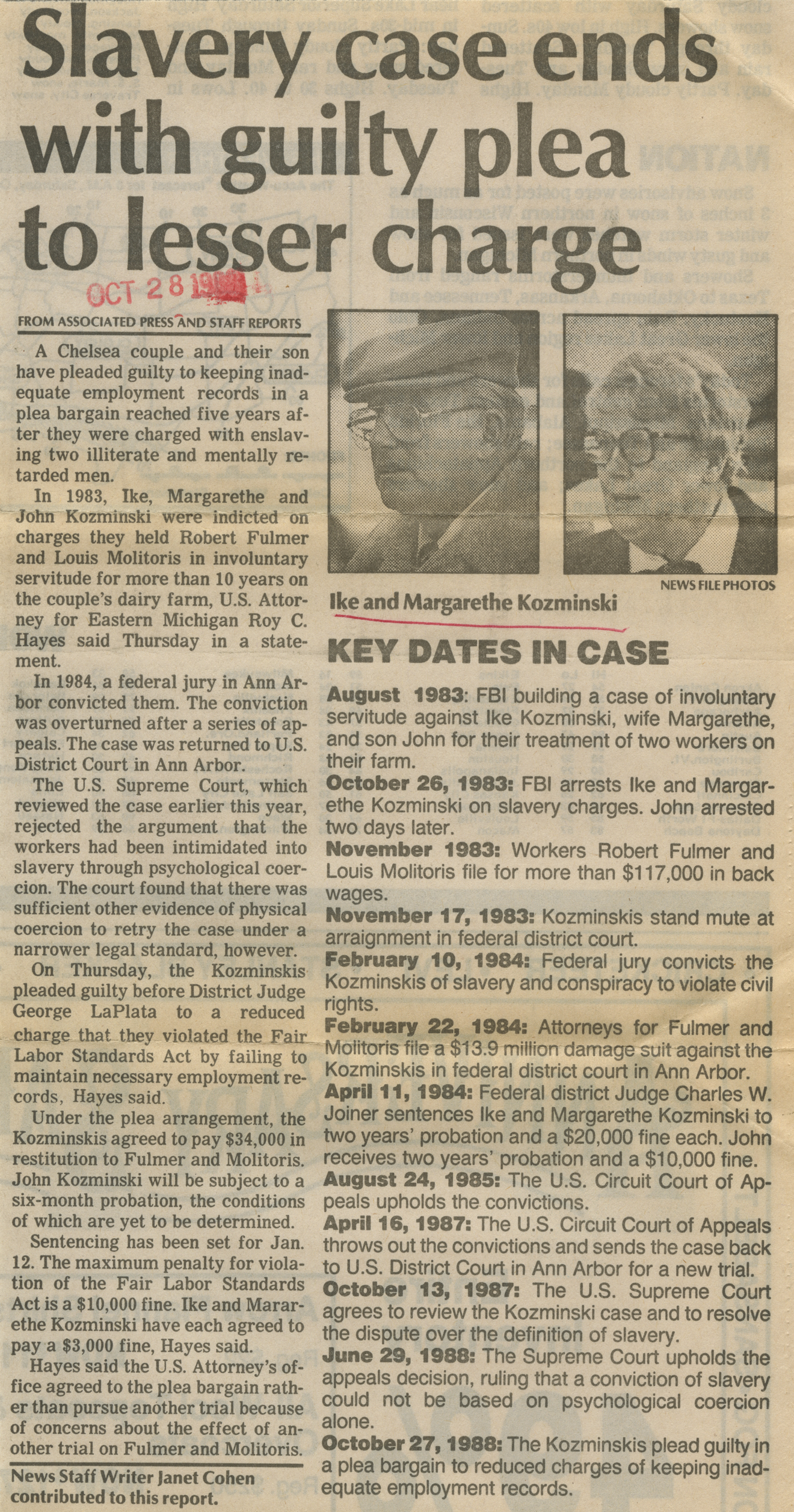 FROM ASSOCIATED PRESS AND STAFF REPORTS

A Chelsea couple and their son have pleaded guilty to keeping inadequate employment records in a plea bargain reached five years after they were charged with enslaving two illiterate and mentally retarded men.

In 1983, Ike, Margarethe and John Kozminski were indicted on charges they held Robert Fulmer and Louis Molitoris in involuntary servitude for more than 10 years on the couple's dairy farm, U.S. Attorney for Eastern Michigan Roy C. Hayes said Thursday in a statement.

In 1984, a federal jury in Ann Arbor convicted them. The conviction was overturned after a series of appeals. The case was returned to U.S. District Court in Ann Arbor.

The U.S. Supreme Court, which reviewed the case earlier this year, rejected the argument that the workers had been intimidated into slavery through psychological coercion. The court found that there was sufficient evidence of physical coercion to retry the case under a narrower legal standard, however.

On Thursday, the Kozminskis pleaded guilty before District Judge George LaPlata to a reduced charge that they violated the Fair Labor Standards Act by failing to maintain necessary employment records, Hayes said.

Under the plea arrangement, the Kozminskis agreed to pay $34,000 in restitution to Fulmer and Molitoris. John Kozminski will be subject to a six-month probation, the conditions of which are yet to be determined.

Sentencing has been set for Jan. 12. The maximum penalty for violation of the Fair Labor Standards Act is a $10,000 fine, Hayes said.

Hayes said the U.S. Attorney's office agreed to the plea bargain rather than pursue another trial because of concerns about the effect of another trial on Fulmer and Molitoris.

August 1983: FBI building a case of involuntary servitude against Ike Kozminski, wife Margarethe, and son John for their treatement of two workers on their farm.

November 1983: Workers Robert Fulmer and Louis Molitoris file for more than $117,000 in back wages.

February 22, 1984: Attorneys for Fulmer and Molitoris file a $13.9 million damage suit against the Kozminskis in federal district court in Ann Arbor.

August 24, 1985: The U.S. Circuit Court of Appeals upholds the convictions.

April 16, 1987: The U.S. Circuit Court of Appeals throws out the convictions and sends the case back to U.S. District Court in Ann Arbor for a new trial.

October 13, 1987: The U.S. Supreme Court agrees to review the Kozminski case and to resolve the dispute over the definition of slavery.

June 29, 1988: The Supreme Court upholds the appeals decision, ruling that a conviction of slavery could not be based on psychological coercion alone.