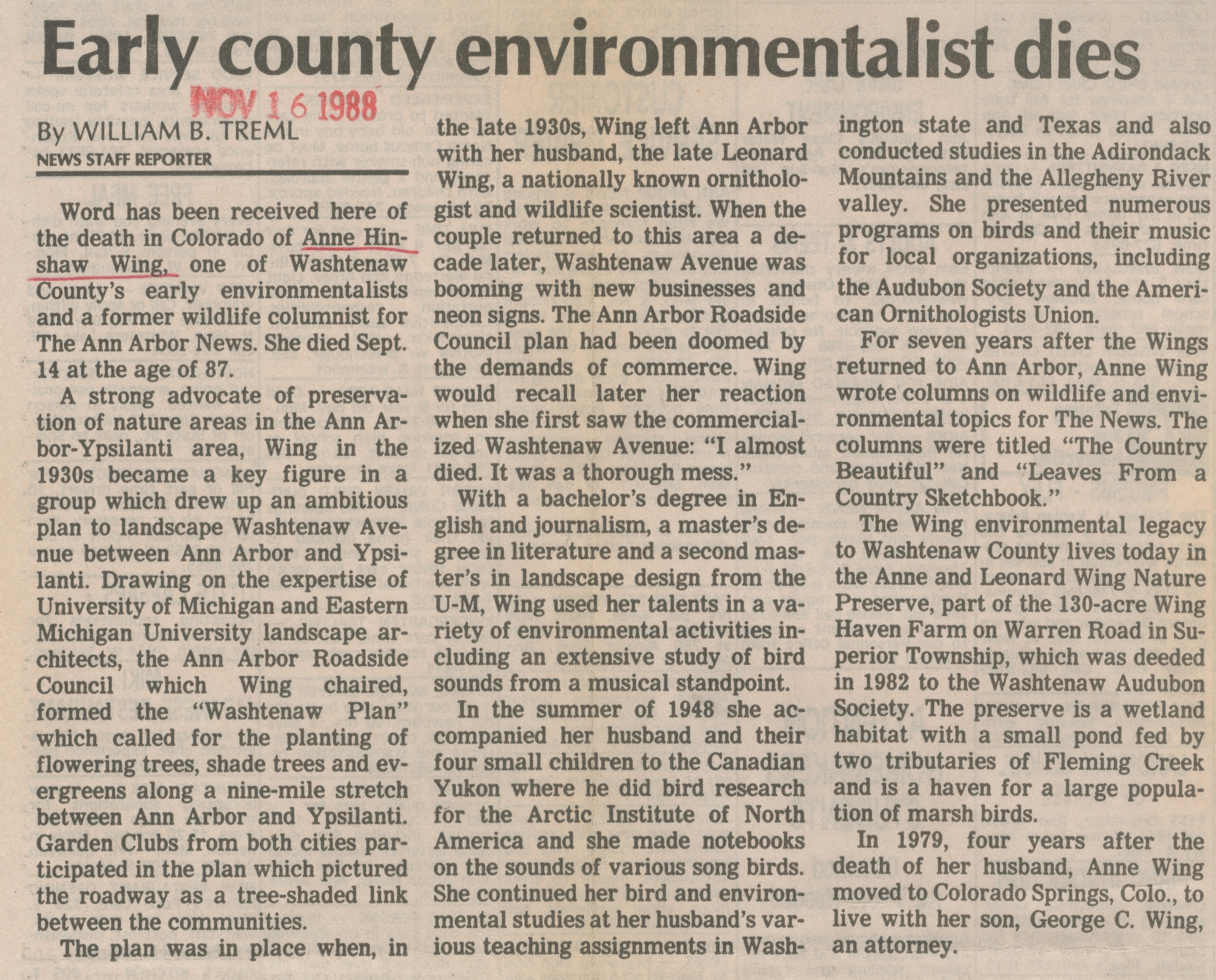 Word has been received here of the death in Colorado of Anne Hinshaw Wing, one of Washtenaw County’s early environmentalists and a former wildlife columnist for The Ann Arbor News. She died Sept. 14 at the age of 87.

A strong advocate of preservation of nature areas in the Ann Arbor-Ypsilanti area, Wing in the 1930s became a key figure in a group which drew up an ambitious plan to landscape Washtenaw Avenue between Ann Arbor and Ypsilanti. Drawing on the expertise of University of Michigan and Eastern Michigan University landscape architects, the Ann Arbor Roadside Council which Wing chaired, formed the “Washtenaw Plan’ which called for the planting of flowering trees, shade trees and evergreens along a nine-mile stretch between Ann Arbor and Ypsilanti. Garden Clubs from both cities participated in the plan which pictured the roadway as a tree-shaded link between the communities.

The plan was in place when, the late 1930s, Wing left Ann Arbor with her husband, the late Leonard Wing, a nationally known ornithologist and wildlife scientist. When the couple returned to this area a decade later, Washtenaw Avenue was booming with new businesses and neon signs. The Ann Arbor Roadside Council plan had been doomed by the demands of commerce. Wing would recall later her reaction when she first saw the commercialized Washtenaw Avenue: “I almost died. It was a thorough mess.”

With a bachelor’s degree in English and journalism, a master’s degree in literature and a second master's degree in landscape design from the U-M, Wing used her talents in a variety of environmental activities including an extensive study of bird sounds from a musical standpoint.

In the summer of 1948 she accompanied her husband and their four small children to the Canadian Yukon where he did bird research for the Arctic Institute of North America and she made notebooks on the sounds of various song birds. She continued her bird and environmental studies at her husband's various teaching assignments in Washington state and Texas and also conducted studies in the Adirondack Mountains and the Allegheny River valley. She presented numerous programs on birds and their music for local organizations, including the Audubon Society and the American Ornithologists Union.

For seven years after the Wings returned to Ann Arbor, Anne Wing wrote columns on wildlife and environmental topics for The News. The columns were titled "The Country Beautiful” and “Leaves From a Country Sketchbook.”

The Wing environmental legacy to Washtenaw County lives today in the Anne and Leonard Wing Nature Preserve, part of the 130-acre Wing Haven Farm on Warren Road in Superior Township, which was deeded in 1982 to the Washtenaw Audubon Society. The preserve is a wetland habitat with a small pond fed by two tributaries of Fleming Creek and is a haven for a large population of marsh birds.

In 1979, four years after the death of her husband, Anne Wing moved to Colorado Springs, Colo., to live with her son, George C. Wing, an attorney.