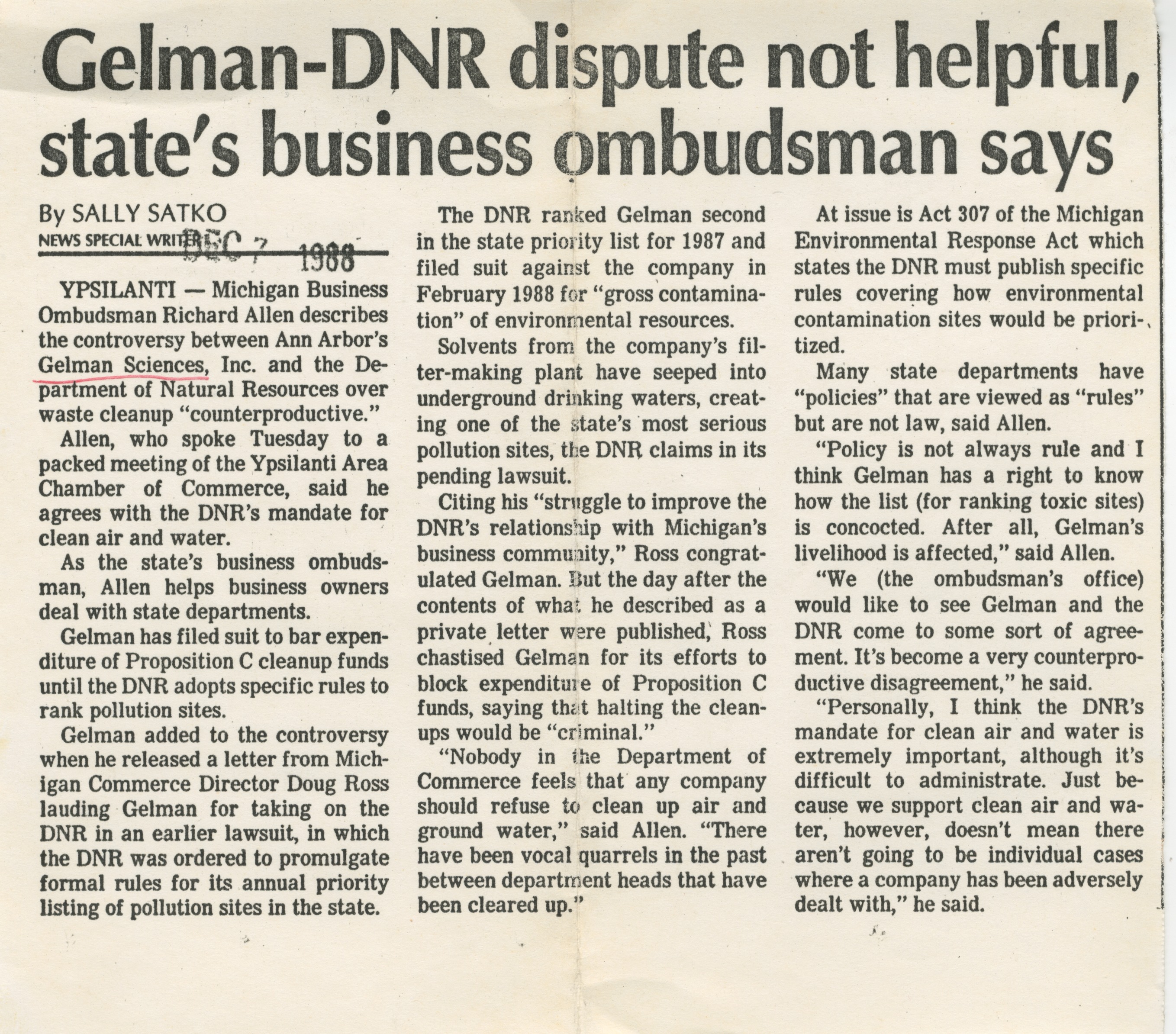 Allen, who spoke Tuesday to a packed meeting of the Ypsilanti Area Chamber of Commerce, said he agrees with the DNR’s mandate for clean air and water.

Gelman added to the controversy when he released a letter from Michigan Commerce Director Doug Ross lauding Gelman for taking on the DNR in an earlier lawsuit, in which the DNR was ordered to promulgate formal rules for its annual priority listing of pollution sites in the state.

The DNR ranked Gelman second in the state priority list for 1987 and filed suit against the company in February 1988 for “gross contamination” of environmental resources.

Solvents from the company’s filter-making plant have seeped into underground drinking waters, creating one of the state’s most serious pollution sites, the DNR claims in its pending lawsuit.

Citing his “struggle to improve the DNR’s relationship with Michigan’s business community,” Ross congratulated Gelman. But the day after the contents of what he described as a private letter were published, Ross chastised Gelman for its efforts to block expenditure of Proposition C funds, saying that halting the cleanups would be “criminal.”

“Nobody in the Department of Commerce feels that any company should refuse to clean up air and ground water,” said Allen. “There have been vocal quarrels in the past between department heads that have been cleared up."

At issue Is Act 307 of the Michigan Environmental Response Act which states the DNR must publish specific rules covering how environmental contamination sites would be prioritized.

Many state departments have “policies” that are viewed as “rules” but are not law, said Allen.

“Policy is not always rule and I think Gelman has a right to know how the list (for ranking toxic sites) is concocted. After all, Gelman’s livelihood is affected,” said Allen.

“We (the ombudsman’s office) would like to see Gelman and the DNR come to some sort of agreement. It’s become a very counterproductive disagreement,” he said.

“Personally, I think the DNR’s mandate for clean air and water is extremely important, although it’s difficult to administrate. Just because we support clean air and water, however, doesn't mean there I aren’t going to be individual cases where a company has been adversely I dealt with,” he said.