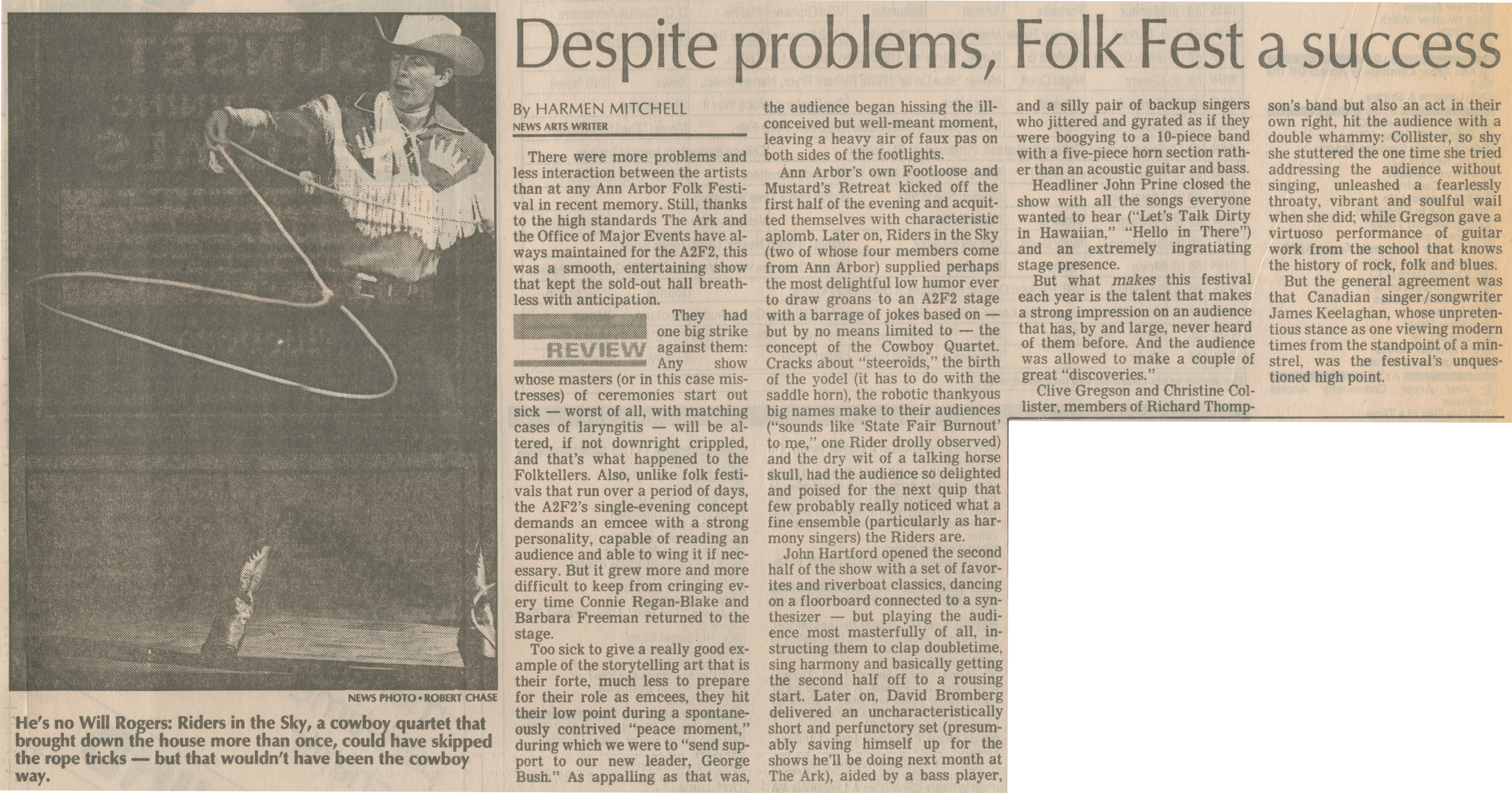 Despite problems, Folk Fest a success

﻿He's no Will Rogers: Riders in the Sky, a cowboy quartet that brought down the house more than once, could have skipped the rope tricks — but that wouldn't have been the cowboy way.
NEWS PHOTO ■ ROBERT CHASE

There were more problems and less interaction between the artists than at any Ann Arbor Folk Festival in recent memory. Still, thanks to the high standards The Ark and the Office of Major Events have always maintained for the A2F2, this was a smooth, entertaining show that kept the sold-out hall breathless with anticipation.

They had one big strike against them: Any show whose masters (or in this case mistresses) of ceremonies start out sick — worst of all, with matching cases of laryngitis — will be altered, if not downright crippled, and that’s what happened to the Folktellers. Also, unlike folk festivals that run over a period of days, the A2F2’s single-evening concept demands an emcee with a strong personality, capable of reading an audience and able to wing it if necessary. But it grew more and more difficult to keep from cringing every time Connie Regan-Blake and Barbara Freeman returned to the stage.

Too sick to give a really good example of the storytelling art that is their forte, much less to prepare for their role as emcees, they hit their low point during a spontaneously contrived “peace moment,” during which we were to “send support to our new leader, George Bush.” As appalling as that was, the audience began hissing the ill-conceived but well-meant moment, leaving a heavy air of faux pas on both sides of the footlights.

Ann Arbor’s own Footloose and Mustard’s Retreat kicked off the first half of the evening and acquitted themselves with characteristic aplomb. Later on, Riders in the Sky (two of whose four members come from Ann Arbor) supplied perhaps the most delightful low humor ever to draw groans to an A2F2 stage with a barrage of jokes based on — but by no means limited to — the concept of the Cowboy Quartet. Cracks about “steeroids,” the birth of the yodel (it has to do with the saddle horn), the robotic thankyous big names make to their audiences ("sounds like ‘State Fair Burnout’ to me,” one Rider drolly observed) and the dry wit of a talking horse skull, had the audience so delighted and poised for the next quip that few probably really noticed what a fine ensemble (particularly as harmony singers) the Riders are.

John Hartford opened the second half of the show with a set of favorites and riverboat classics, dancing on a floorboard connected to a synthesizer — but playing the audience most masterfully of all, instructing them to clap doubletime, sing harmony and basically getting the second half off to a rousing start. Later on, David Bromberg delivered an uncharacteristically short and perfunctory set (presumably saving himself up for the shows he’ll be doing next month at The Ark), aided by a bass player,

and a silly pair of backup singers who jittered and gyrated as if they were boogying to a 10-piece band with a five-piece horn section rather than an acoustic guitar and bass.

Headliner John Prine closed the show with all the songs everyone wanted to hear (“Let’s Talk Dirty in Hawaiian,” “Hello in There”) and an extremely ingratiating stage presence.

But what makes this festival each year is the talent that makes a strong impression on an audience that has, by and large, never heard of them before. And the audience was allowed to make a couple of great “discoveries.”

Clive Gregson and Christine Collister, members of Richard Thompson's band but also an act in their own right, hit the audience with a double whammy: Collister, so shy she stuttered the one time she tried addressing the audience without singing, unleashed a fearlessly throaty, vibrant and soulful wail when she did; while Gregson gave a virtuoso performance of guitar work from the school that knows the history of rock, folk and blues.

But the general agreement was that Canadian singer/songwriter James Keelaghan, whose unpretentious stance as one viewing modern times from the standpoint of a minstrel, was the festival’s unquestioned high point.