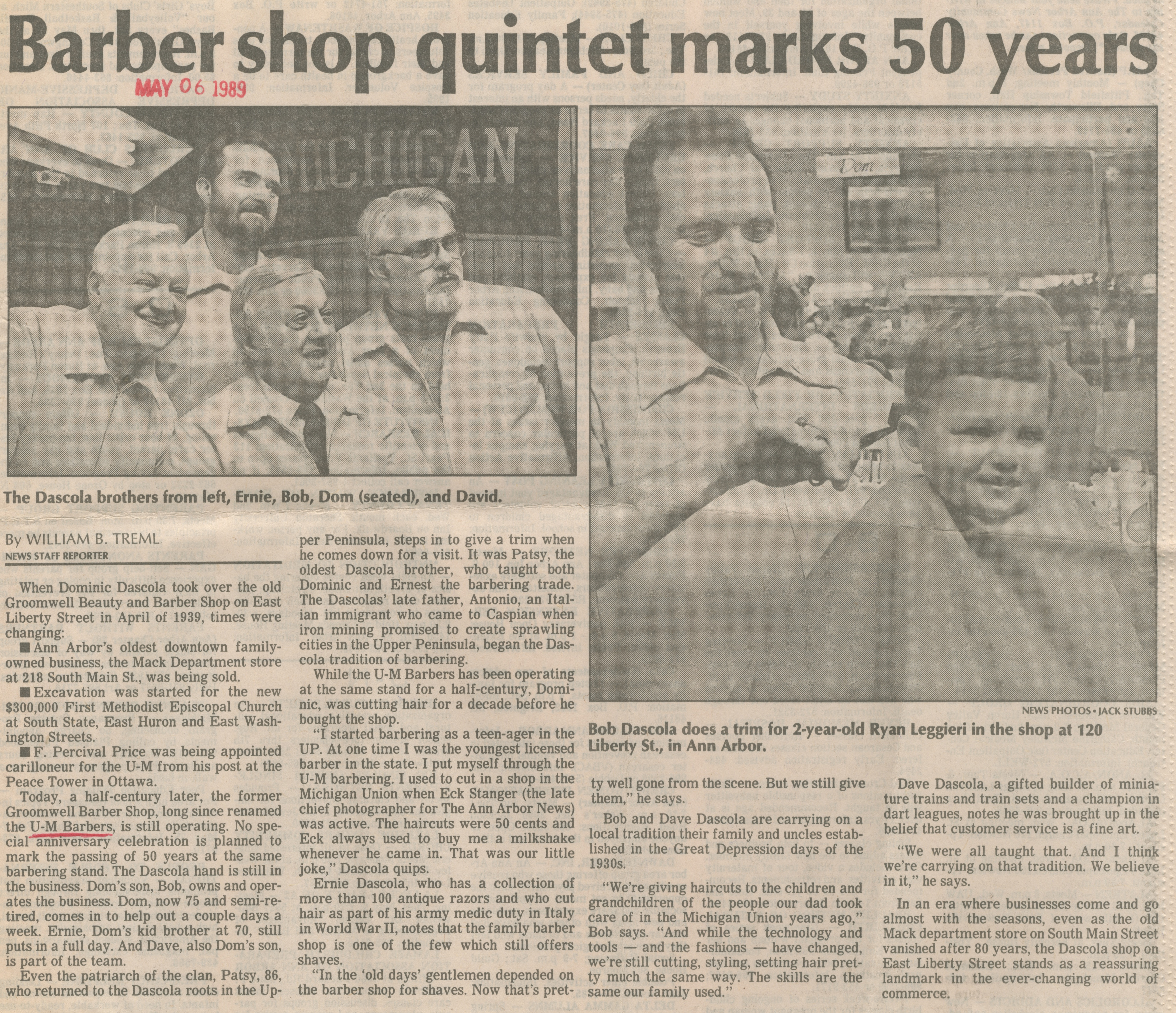 When Dominic Dascola took over the old Groomwell Beauty and Barber Shop on East Liberty Street in April of 1939, times were changing:

■ F. Percival Price was being appointed carilloneur for the U-M from his post at the Peace Tower in Ottawa.

Today, a half-century later, the former Groomwell Barber Shop, long since renamed the U-M Barbers, is still operating. No special anniversary celebration is planned to mark the passing of 50 years at the same barbering stand. The Dascola hand is still in the business. Dom’s son, Bob, owns and operates the business. Dom, now 75 and semi-retired, comes in to help out a couple days a week. Ernie, Dom’s kid brother at 70, still puts in a full day. And Dave, also Dom’s son, is part of the team.

Even the patriarch of the clan, Patsy, 86, who returned to the Dascola roots in the Upper Peninsula, steps in to give a trim when he comes down for a visit. It was Patsy, the oldest Dascola brother, who taught both Dominic and Ernest the bartering trade. The Dascolas’ late father, Antonio, an Italian immigrant who came to Caspian when iron mining promised to create sprawling cities in the Upper Peninsula, began the Dascola tradition of barbering.

While the U-M Barbers has been operating at the same stand for a half-century, Dominic, was cutting hair for a decade before he bought the shop.

“I started barbering as a teen-ager in the UP. At one time I was the youngest licensed barber in the state. I put myself through the U-M barbering. I used to cut in a shop in the Michigan Union when Eck Stanger (the late chief photographer for The Ann Arbor News) was active. The haircuts were 50 cents and Eck always used to buy me a milkshake whenever he came in. That was our little joke,” Dascola quips.

Ernie Dascola, who has a collection of more than 100 antique razors and who cut hair as part of his army medic duty in Italy in World War II, notes that the family barber shop is one of the few which still offers shaves.

“In the ‘old days’ gentlemen depended on the barber shop for shaves. Now that’s pretty well gone from the scene. But we still give them,” he says.

Bob and Dave Dascola are carrying on a local tradition their family and uncles established in the Great Depression days of the 1930s.

“We’re giving haircuts to the children and grandchildren of the people our dad took care of in the Michigan Union years ago,” Bob says. “And while the technology and tools — and the fashions — have changed, we’re still cutting, styling, setting hair pretty much the same way. The skills are the same our family used.”

Dave Dascola, a gifted builder of miniature trains and train sets and a champion in dart leagues, notes he was brought up in the belief that customer service is a fine art.

“We were all taught that. And I think we’re carrying on that tradition. We believe in it,” he says.

In an era where businesses come and go almost with the seasons, even as the old Mack department store on South Main Street vanished after 80 years, the Dascola shop on East Liberty Street stands as a reassuring landmark in the ever-changing world of commerce.

The Dascola brothers from left, Ernie, Bob, Dom (seated), and David.
Bob Dascola does a trim for 2-year-old Ryan Leggieri in the shop at 120 Liberty St., in Ann Arbor.
NEWS PHOTOS • JACK STUBBS