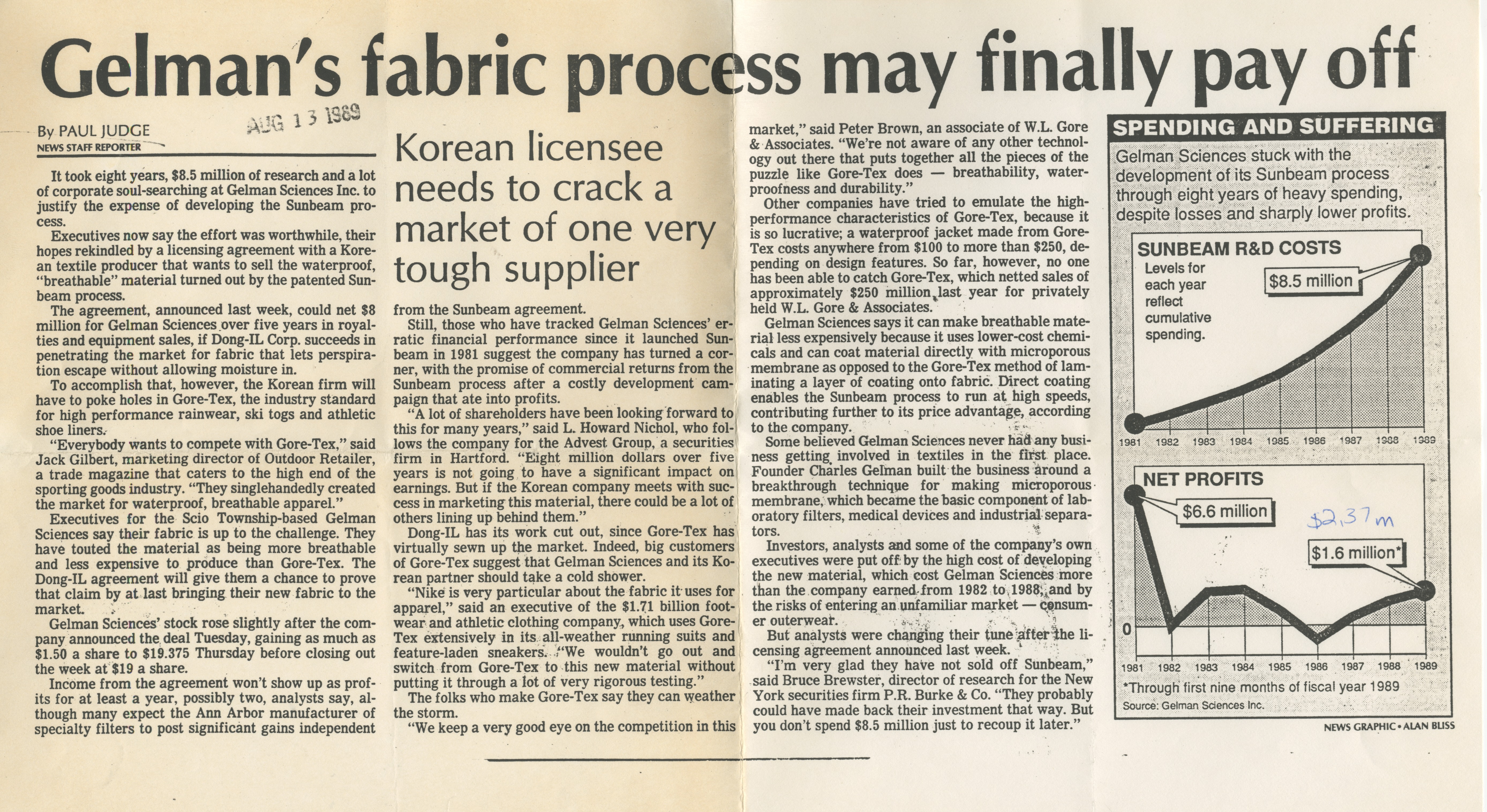 It took eight years, $8.5 million of research and a lot of corporate soul-searching at Gelman Sciences Inc. to justify the expense of developing the Sunbeam process.

Executives now say the effort was worthwhile, their hopes rekindled by a licensing agreement with a Korean textile producer that wants to sell the waterproof, “breathable” material turned out by the patented Sunbeam process.

The agreement, announced last week, could net $8 million for Gelman Sciences over five years in royalties and equipment sales, if Dong-IL Corp. succeeds in penetrating the market for fabric that lets perspiration escape without allowing moisture in.

To accomplish that, however, the Korean firm will have to poke holes in Gore-Tex, the industry standard for high performance rainwear, ski togs and athletic shoe liners.

“Everybody wants to compete with Gore-Tex,” said Jack Gilbert, marketing director of Outdoor Retailer, a trade magazine that caters to the high end of the sporting goods industry. “They singlehandedly created the market for waterproof, breathable apparel.”

Executives for the Scio Township-based Gelman Sciences say their fabric is up to the challenge. They have touted the material as being more breathable and less expensive to produce than Gore-Tex. The Dong-IL agreement will give them a chance to prove that claim by at last bringing their new fabric to the market.

Gelman Sciences’ stock rose slightly after the company announced the deal Tuesday, gaining as much as $1.50 a share to $19,375 Thursday before closing out the week at $19 a share.

Income from the agreement won’t show up as profits for at least a year, possibly two, analysts say, although many expect the Ann Arbor manufacturer of specialty filters to post significant gains independent from the Sunbeam agreement.

Still, those who have tracked Gelman Sciences’ erratic financial performance since it launched Sunbeam in 1981 suggest the company has turned a corner, with the promise of commercial returns from the Sunbeam process after a costly development campaign that ate into profits.

“A lot of shareholders have been looking forward to this for many years,” said L. Howard Nichol, who follows the company for the Advest Group, a securities firm in Hartford. “Eight million dollars over five years is not going to have a significant impact on earnings. But if the Korean company meets with success in marketing this material, there could be a lot of others lining up behind them.”

Dong-IL has its work cut out, since Gore-Tex has virtually sewn up the market. Indeed, big customers of Gore-Tex suggest that Gelman Sciences and its Korean partner should take a cold shower.

“Nike is very particular about the fabric it uses for apparel,” said an executive of the $1.71 billion footwear and athletic clothing company, which uses Gore-Tex extensively in its all-weather running suits and feature-laden sneakers. “We wouldn’t go out and switch from Gore-Tex to this new material without putting it through a lot of very rigorous testing.”

The folks who make Gore-Tex say they can weather the storm.

“We keep a very good eye on the competition in this market,” said Peter Brown, an associate of W.L. Gore & Associates. “We’re not aware of any other technology out there that puts together all the pieces of the puzzle like Gore-Tex does - breathability, waterproofness and durability.”

Other companies have tried to emulate the high-performance characteristics of Gore-Tex, because it is so lucrative; a waterproof jacket made from Gore-Tex costs anywhere from $100 to more than $250, depending on design features. So far, however, no one has been able to catch Gore-Tex, which netted sales of approximately $250 million last year for privately held W.L. Gore & Associates.

Gelman Sciences says it can make breathable material less expensively because it uses lower-cost chemicals and can coat material directly with microporous membrane as opposed to the Gore-Tex method of laminating a layer of coating onto fabric. Direct coating enables the Sunbeam process to run at high speeds, contributing further to its price advantage, according to the company.

Some believed Gelman Sciences never had any business getting, involved in textiles in the first place. Founder Charles Gelman built the business around a breakthrough technique for making microporous membrane, which became the basic component of laboratory filters, medical devices and industrial separators.

Investors, analysts and some of the company’s own executives were put off: by the high cost of developing the new material, which cost Gelman Sciences more than the company earned from 1982 to,1988;Aand by the risks of entering an unfamiliar market — consumer outerwear.

But analysts were changing their tune after the licensing agreement announced last week. “I’m very glad they have not sold off Sunbeam,” said Bruce Brewster, director of research for the New York securities firm P.R. Burke & Co. “They probably could have made back their investment that way. But you don’t spend $8.5 million just to recoup it later.”

Gelman Sciences stuck with the development of its Sunbeam p through eight years of heavy spending, despite losses and sharply lower profits.