Panic, not car malfunction, theorized as cause of crash 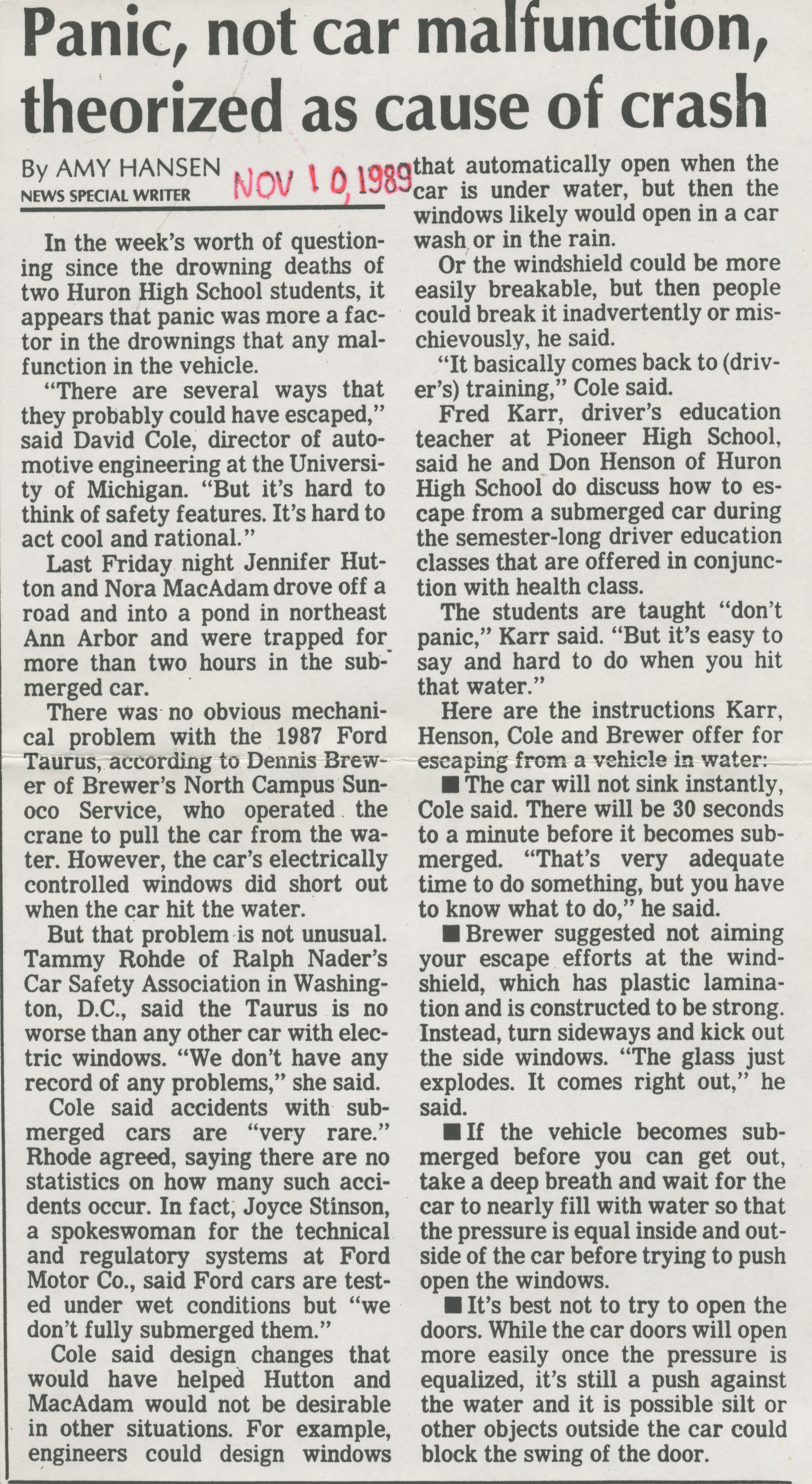 ﻿Panic, not car malfunction, theorized as cause of crash

In the week’s worth of questioning since the drowning deaths of two Huron High School students, it appears that panic was more a factor in the drownings that any malfunction in the vehicle.

“There are several ways that they probably could have escaped,” said David Cole, director of automotive engineering at the University of Michigan. “But it’s hard to think of safety features. It’s hard to act cool and rational.”

Last Friday night Jennifer Hutton and Nora MacAdam drove off a road and into a pond in northeast Ann Arbor and were trapped for more than two hours in the submerged car.

There was no obvious mechanical problem with the 1987 Ford Taurus, according to Dennis Brewer of Brewer’s North Campus Sunoco Service, who operated the crane to pull the car from the water. However, the car’s electrically controlled windows did short out when the car hit the water.

But that problem is not unusual. Tammy Rohde of Ralph Nader’s Car Safety Association in Washington, D.C., said the Taurus is no worse than any other car with electric windows. “We don’t have any record of any problems,” she said.

Cole said accidents with submerged cars are “very rare.” Rhode agreed, saying there are no statistics on how many such accidents occur. In fact, Joyce Stinson, a spokeswoman for the technical and regulatory systems at Ford Motor Co., said Ford cars are tested under wet conditions but “we don’t fully submerged them.”

Cole said design changes that would have helped Hutton and MacAdam would not be desirable in other situations. For example, engineers could design windows that automatically open when the car is under water, but then the windows likely would open in a car wash or in the rain.

Or the windshield could be more easily breakable, but then people could break it inadvertently or mischievously, he said.

“It basically comes back to (driver’s) training,” Cole said.

Fred Karr, driver’s education teacher at Pioneer High School, said he and Don Henson of Huron High School do discuss how to escape from a submerged car during the semester-long driver education classes that are offered in conjunction with health class.

The students are taught “don’t panic,” Karr said. “But it’s easy to say and hard to do when you hit that water.”

Here are the instructions Karr, Henson, Cole and Brewer offer for escaping from a vehicle in water:

■ The car will not sink instantly, Cole said. There will be 30 seconds to a minute before it becomes submerged. “That’s very adequate time to do something, but you have to know what to do,” he said.

■ Brewer suggested not aiming your escape efforts at the windshield, which has plastic lamination and is constructed to be strong. Instead, turn sideways and kick out the side windows. “The glass just explodes. It comes right out,” he said.

■ If the vehicle becomes submerged before you can get out, take a deep breath and wait for the car to nearly fill with water so that the pressure is equal inside and outside of the car before trying to push open the windows.

■ It’s best not to try to open the doors. While the car doors will open more easily once the pressure is equalized, it’s still a push against the water and it is possible silt or other objects outside the car could block the swing of the door.